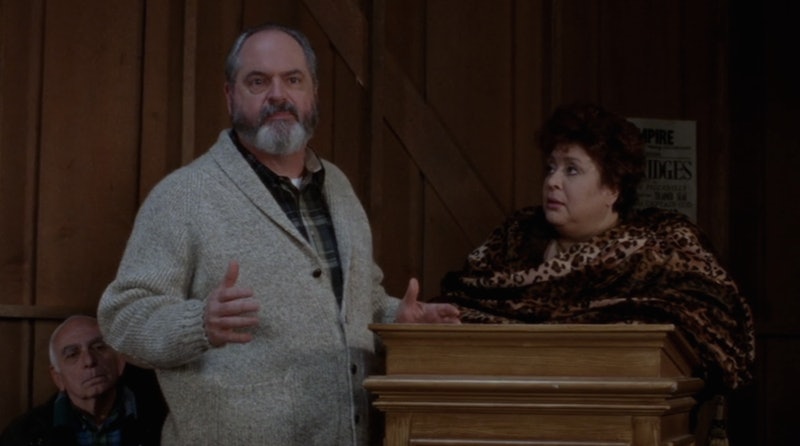 You're not alone in longing for Stars Hollow, GG fans; Taylor Doose AKA Michael Winters seems to be just as pumped about the upcoming four episode Gilmore Girls revival as you are. And why shouldn't he be? According to a recent Gilmore Guys interview, Winters acknowledged that just about everyone in Stars Hollow is returning, with new additions including Carole King and Dakin Matthews (Sophie and Headmaster Charleston respectively). Which are interesting new picks for the roster, because, well, what kind of weird twists could this bring to the overall plot?

Well, let's backtrack and acknowledge how baffling it is that Rory's former headmaster would return. For an aggressively long time I sat wondering, "How exactly is Chilton going to factor into the reboot? Are Sookie and Jackson's kids exceptionally smart and high school aged by now or something?" It then dawned on me that it's entirely plausible (although kind of hokey) that Rory would return to Connecticut for a Chilton class reunion, Veronica Mars movie style. This would be an easy was to unearth Chad Michael Murray from whatever hole CW has stranded him in since the mid-2000s. Just as likely, though, is that Headmaster Charleston would be one of many mourners at a Richard Gilmore funeral. After all, the two were longtime golf friends.

So what about King's involvement? Many of you may have forgotten she was even on the show, citing her main contribution to the series as the theme song, "Where You Lead." I, once again, had another moment where I was culminating how sweet it was that she finally got involved in Stars Hollow life... except King has been a part of Stars Hollow this entire time.

After jogging my memory (i.e. Googling) it would turn out that King played Sophie Bloom, who appropriately owned Sophie's Music Shop. Though she only popped up in three episodes of the series, Sophie was instrumental (ha) in helping Lane develop as a musician. When Lane went ga-ga over a drum set in Sophie's Shop, the store-owner begrugingly let her practice there. There was also that season five plot when Zack was practicing for his bluegrass side project at the shop and Lane thought she was having an affair with Sophie (which, you know, lol to that).

It's very plausible that Sophie could just be another face in your garden variety Stars Hollow town meeting or, you know, Apple Picking Festival. But considering Winters makes a point to say, "we shoot with Carole King next week," I'm assuming her role is a little more prominent. Perhaps Lane, several years into motherhood, is going to make a venture back into her musical roots. If anyone could convince Lane to pick up those drumsticks again, it could (and should) be King.

It seems like we're just catching the tip of the iceberg when it comes to Gilmore Girls cameos. Stay tuned to see who might be visiting next!