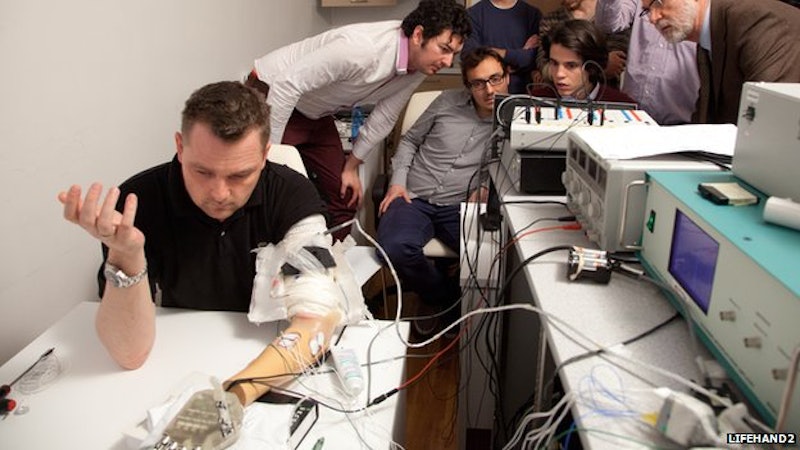 A Danish amputee has had his sense of touch restored after researchers implanted electrodes in his nerves, allowing him to feel objects in his hands for the first time in nine years. Dennis Aabo Sørensen had the electrodes implanted in his arm last year during a clinical trial before having them connected to a prosthetic bionic hand by researchers at the École polytechnique fédérale de Lausanne (EFPL) in Switzerland and the Scuola Superiore Sant’Anna (SSSA). Sørensen, who lost his left hand in a firework accident ten years ago, is the first amputee to have his sense of touch, in real time, restored.

Researchers in the lab tested Sørensen’s ability to touch by giving him a "special" blindfold and earplugs, which allowed him to test the strength of his grasp and the shape of various objects. Sørensen said he could feel if the object was hard, round or square. After undergoing surgery in January 2013, researchers put Sørensen through 19 days of tests and connected the prosthetic hand to the electrodes in his arm every day for a week.

"Suddenly you could see my left hand was talking to my brain again and it was magic," said Sørensen, on the moment he could first feel again. "It was surreal. I grabbed the object in my hand and knew it was round. It was a baseball."

The bionic hand is the first sensory artificial limb, and the first time that electrodes have been implanted into the peripheral nervous system of an amputee. Sørenson's sense of touch was achieved by measuring the tension in the artificial tendons that control finger movement. That measure was then turned into an electrical current, according to Silvestro Micera, a researcher who worked on the project for 15 years. The electrical currents were sent through electrodes embedded in Sørenson's nerves, which gave him a sense of touch he'd been without since the firework mishap one New Year's Eve.

Sørenson is now using a battery-operated prosthetic that does not give him a sense of touch, as safety restrictions meant the electrodes were removed from his arm after 30 days. But the trial gives Sørenson and researchers hope for the future lives of amputees. The next steps are to develop a study where the electrodes can be implanted for longer, perhaps even months, and a more mobile prosthetic.

"These results show the possibilities for amputees," Micera said. "It is possible that this could be expanded to lower limbs."