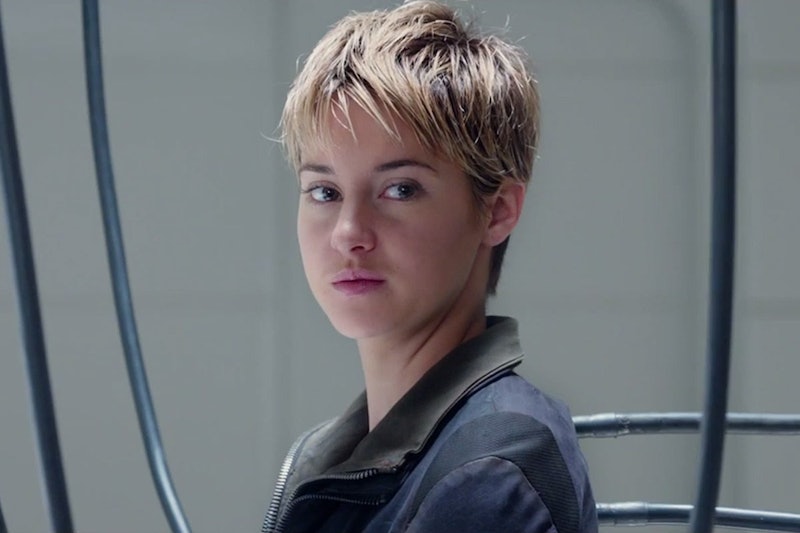 I'll be the first to admit that I was a bit skeptical when I first heard of the Divergent series. It was just so tempting to dismiss it as a Hunger Games knock-off attempting to capitalize on the recent trend of YA dystopian novels and films. But after delving into the series, it became clear to me that the franchise is much more substantive than it might appear at first glance — in fact, I'd argue that Divergent is one of the most feminist and important series around.

First and foremost, the movies all pass the Bechdel test with flying colors; not only are there plenty of female characters, including both the hero (Shailene Woodley) and the primary villain (Kate Winslet), but the subjects they talk about are hardly ever simply about men. They discuss war, violence, the state of humanity — not exactly your typical teen movie. But that's only the start; what really makes Divergent so feminist is the evolution of the protagonist, Tris (played by Woodley). When viewers first meet Beatrice Prior, she is quiet and obedient, having been taught to suppress her feelings. It is only when she learns of her true nature — that she is Divergent, aka a person with many qualities, rather than Abnegation, where self-denial is the main trait — that she is confronted with the task of choosing her own identity.

As our protagonist elects to leave behind Abnegation and explore the unfamiliar terrain of the outside world, she sheds her old name — choosing now to go by Tris, not Beatrice — and old grey clothing in favor of a new identity. And, as she begins her training for Dauntless, the brave, risk-taking faction, the movie's feminism truly begins to shine. The faction doesn't judge based on gender; instead, Tris is thrust into the same death-defying challenges as her male counterparts. Although I know plenty of people who find it disturbing to watch Woodley get punched in the face by Miles Teller, I believe it's laudable that Tris overcomes her challenges without being given any special treatment. She may be smaller than many of her peers in dauntless, but she proves her strength all the same; instead of being a damsel in distress, Tris, when put into potentially deadly situations, overcomes them entirely of her own volition.

Some Divergent critics argue that Tris' relationship with Four (Theo James), her love interest throughout the series, takes away from the franchise's feminism, but I couldn't disagree more. Yes, Tris has a super-hot boyfriend whose very presence often rattles her. But as the series goes on, it's clear that Tris and Four are a team, working together to defeat a common enemy. This point is particularly salient in the book Allegiant , as it is told from each character's perspective in alternating chapters. Both Tris and Four have vulnerabilities, and they rely upon each other for strength. It's a love story, for sure, but not of the night-in-shining-armor variety.

But overall, Divergent is Tris' story to tell, and the series never wavers from making that known. The franchise is about coming of age and defying expectations, and Tris, who does not fit into any one faction, proves that she can't be crammed into any of the boxes deemed appropriate for her by society. When she learns that she is Divergent, Tris chooses to use her unique status to fight for something bigger than herself; she dedicates herself to a cause, and ultimately sacrifices herself for it.Sshe embodies core values of heroes throughout history, male and female alike.

It might be easy for some to write off Divergent as a silly YA film franchise, but as Tris' journey proves, it's so much more than that. The series' heroine commands respect as a modern feminist icon; she's a female character who, despite having the odds stacked against her, acts bravely and nobly to challenge her society and make a difference in the world. And that very notion is cinematic feminism at its finest.

More like this
Everything To Know About 'The Hunger Games' Prequel Movie
By Grace Wehniainen and Radhika Menon
16 Novels That Paint A Realistic Portrait Of Abortion
By K.W. Colyard
Yes, Joseph Quinn Is Actually Playing The Guitar In This Epic 'Stranger Things' Scene
By Alyssa Lapid
Florence Pugh & Zoe Kazan Have Teamed Up For A Major New Netflix Series
By Rachel Mantock
Get Even More From Bustle — Sign Up For The Newsletter