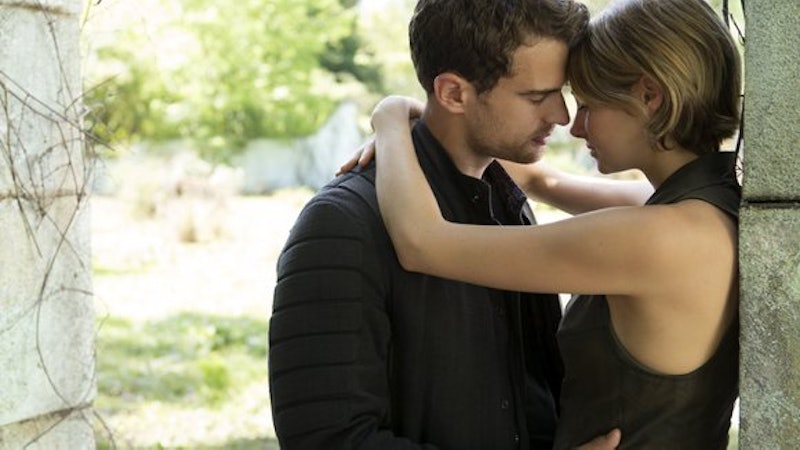 While normally I'm not someone who enjoys knowing what's going to happen in a movie before heading into the theater, I'll admit that there are times it's actually pretty nice to be spoiled. Gone Girl, for instance, was a lot easier to take in having already experienced Gillian Flynn's twists and turns in the book; Game of Thrones, too, is great fun to watch on-screen, even when some of the show's biggest surprises are anything but. And then there's the Divergent series, whose latest installment, Allegiant, hits theaters on Mar. 18. As a reader of Veronica Roth's YA series, I already knew most of the biggest The Divergent Series: Allegiant spoilers before seeing the big screen adaptation. Yet thankfully, the movie was still filled with plenty of welcome surprises and deviations from the novel that'll thrill book readers and non-book readers alike.

And if you, too, read the books and are wondering what Allegiant changed or didn't change, or if you're just a too-curious person hoping to get the inside scoop on a movie you haven't yet seen, below are the 18 biggest spoilers from the new movie. Don't say you weren't warned.

1. Chicago Is A Total Mess

With no more factions or leaders, the people go berserk, killing anyone who helped Jeanine for being a "traitor."

Although Caleb is one of those "traitors," Four gets him out of there, and he's grateful to Four and Tris for letting him live.

3. They Leave The City To Go Past The Wall

Tris, Four, Caleb, Christina, Tori and Peter (who's forced his way in) sneak out of the city. They climb over the wall and attempt to escape to the other side.

R.I.P., Maggie Q's character who is shot and killed.

5. The Other Side Is A Radioactive Wasteland, Called "The Fringe"

Because people were awful and destroyed each other.

6. Except For The Bureau Of Genetic Welfare

Which is super fancy and cool, filled with crazy showers and Jeff Daniels.

7. The Group Finds Out They're All Famous, But Damaged

Good news: Tris, Four and the others are all famous, because they've been watched since birth. Bad news: except for Tris, who's "pure," the rest of them are totally "damaged," thanks to genetic experiments of the past. Whomp.

8. Tris Becomes Close With David, Who We Totally Know Is Bad Way Before She Does

Dammit, Jeff. You're too good at playing evil.

9. And Four Learns To Fight With Really Cool Weapons

Four isn't allowed most of the places that Tris is, so instead, he gets a job shooting things and using drones. He's happy.

10. Until He Finds Out That The Bureau Is Resetting People's Memories

Although Four was told that his job involved saving children from the fringe who were damaged from genetic testing, he soon discovers that it's all a lie; instead, the Bureau kills these children's families, wipes their memories, and raises them as if their previous lives never happened. It is very corrupt, but when Four tries to warn Tris of David's ulterior motives, she refuses to believe him.

11. Tris Goes With David To Visit The Council

But soon learns for herself that David has lied to her, and that he could be helping Chicago (which is basically in a civil war) but is choosing not to. She's quite mad.

12. Four Goes Back To Chicago

Because he wants to stop the war. Except he gets caught, and arrested. Silly Four!

13. So Tris And The Others Go To Rescue Him, Stealing David's Plane

Suffice to say, David isn't happy. Tris and Co. go off to save Four (after Caleb's tracked him down in a kinda-apology to Tris), but it's not the only thing they have to do once there, because...

David is the worst. Peter is also the worst. So they team up to let memory-erasing serum loose all over Chicago, because David thinks it'll restore order and not let him lose his power.

And he's all like "yay!" before being like "wait crap" because they all realize they need to stop Peter from convincing Evelyn, who's become a bad guy, to release the serum. She uses a sample of it to erase Marcus' memories, and let's be real, he kinda deserves it.

16. The Serum Is Released

Evelyn gives the OK, and people's memories start to go. Tris and the others hurry to come up with a plan, as the serum is spreading to where they are, too. They meet Peter, who escapes, but not before injuring Evelyn. A plan gets made.

17. Tris Goes To Stop The Serum From Spreading More

She runs through tunnels, but encounters a hologram video of David, who tells her to stop fighting. Yet she outsmarts him and shoots the ventilation system, so that the serum can no longer spread. David is not happy at all.

18. It All Ends Happily Ever After

Well, for now. The second part, Ascendant, hits theaters next year, and it'll show what happens when Tris tears down that wall.

Feel spoiled enough yet? Get ready — the most exciting stuff will come in next year's final act in the Divergent series.