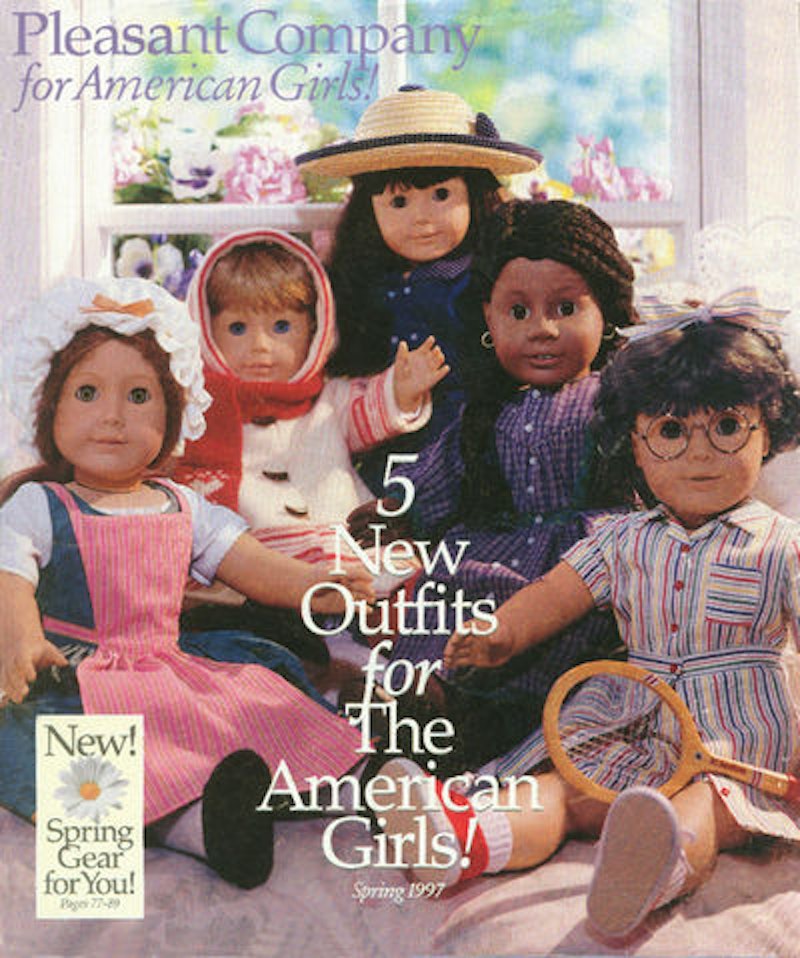 Pretty much every kid in the ‘90s wanted an American Girl doll. That’s an established fact. But there were also plenty of things in the American Girl catalog we wanted as kids in the ‘90s that went far, far beyond the dolls themselves. What made the dolls so spectacular, you see, was what went along with them: Their histories, their personal stories, and the accessories that allowed us to recreate those stories live and in person. That’s why they’re so memorable, and that’s why so many of us still have a soft spot for our Pleasant Company-era American Girl doll memories.

Did we all have every single item from every collection? Heck no; the accessories may have been cool, but they were also monstrously expensive. Even if we didn’t even own any of the accessories, though, we still poured over the catalogs every time they arrived in the mail, picking through each collection with a well-honed eye, marking out our favorites and dreaming about what we’d do with them if we ever acquired them. It didn’t even matter if we never actually did acquire them — because they fired up our imaginations all the same.

You can actually buy some of the AG catalogs dating back to the early-to-mid-‘90s on eBay if you really want to indulge in some heavy-duty nostalgia. However, as a responsible adult with a fairly decent head for money, I am unwilling to spend upwards of $60 on an old toy catalog; as such, this is not something I will be doing. Luckily for me (and anyone else who takes a similar view), though, the website American Girl Fan has a number of photos of the old catalogs available for perusal. They really are a blast from the past, so if you’re into that sort of thing, head on over there and check it out.

In the meantime, here are 15 things we all wanted from the American Girl catalog besides the dolls themselves.

1. A Human-Sized Outfit To Match Your Doll’s

Because nothing beat being able to dress just like your doll. I never had any of the actual outfits, but I did have a couple of the nightgowns; they were incredibly soft and comfortable. I still kind of miss them, to be honest.

2. Anything With Pretend Food In it

The school lunches and the holiday and birthday party foods may not have been real, but they sure did look delicious. I was always particularly taken by Samantha’s ice cream sundae party set and Kirsten’s St. Lucia Day buns, but really, they’re all pretty spectacular.

3. Anything With Real Food In It

If you were super into the crafts that came in a few of the accessory sets (like the aforementioned food-based projects), these suckers were for you. Each kit provided everything you needed to make some sort of craft, from straw ornaments like the ones Kirsten would have made to the kinds of lanyards Molly created at summer camp (and which, to be fair, kids still make at summer camp, because boondoggle never goes out of style). You could even subscribe to American Girl Pastimes and get a different craft kit mailed to you each month — long before subscription boxes became the impossibly popular trend they are now.

5. Toys For Your Toy

Each of the dolls had their own doll; typically it was part of their holiday collections, although a few of the other sets had additional tidbits: Samantha got a teddy bear for her birthday, Molly had paper dolls in her winter collection, and so on. Even the Bitty Baby baby doll collection had Bitty Bear.

Because it actually played, of course.

Perhaps unsurprisingly, a lot of the best accessories made up the holiday collections, because, well, the dolls’ holiday gifts were epic. They were also frequently projects you could actually make yourself, which was true of Addy’s embroidery set. Do we desperately need to know how to make cute little pictures out of thread and cloth anymore? Not really — but it’s still fun. And besides, the ability to use a needle and thread might come in handy later on in life — I hem a lot of my own pants because no one makes trousers the right length for my short, stubby legs. It’s a useful skill.

Because the chalkboard was real. You could actually write it on it. Yes, please.

Periodically, a new outfit or two would become available for each doll. They weren’t connected to the book series, but they illustrated a part of life during the era to which each doll belonged that we hadn’t hitherto seen: Addy had a stilt-walking set; Samantha had a swimming costume (and boy, were Edwardian-era swimming costumes a hoot); and so on and so forth. They each had their own accessory set, too, which helped complete the picture.

I always thought Molly’s white, trunk-style wardrobe spangled with bright red stars was the coolest, but that’s just me.

After the creation of the Girl of Today line in 1995 (although it’s now called Truly Me), we also gained access to a whole bunch of accessories for contemporary American girls. The fun thing was that you could mix and match them according to the story you made up for your doll — so if you decided your doll was into cheerleading and computers, your custom-matched school set could see her dressing up in a cheerleading uniform for practice, then settling down with her Mac and her math textbook to take care of homework afterwards. Super cool stuff.

Part of the American Girl Gear collection, which consisted of everything from books to clothing for actual girls (not ddolls), Grin Pins were basically just fun little buttons to pin everywhere — or collect on a giant banner like this one. Practical? No. Fun? If collecting is your thing, definitely.

P.S. This completed banner is for sale on eBay. Want it? Go ahead and bid!

15. A Trip to the Doll Hospital

I mean, obviously we didn’t want our dolls to get broken — but after a trip to the AG Doll Hospital, your pal came home with a certificate of good health, a hospital gown, a hospital ID bracelet, and a “get well soon” balloon. Talk about doing doll repair right.