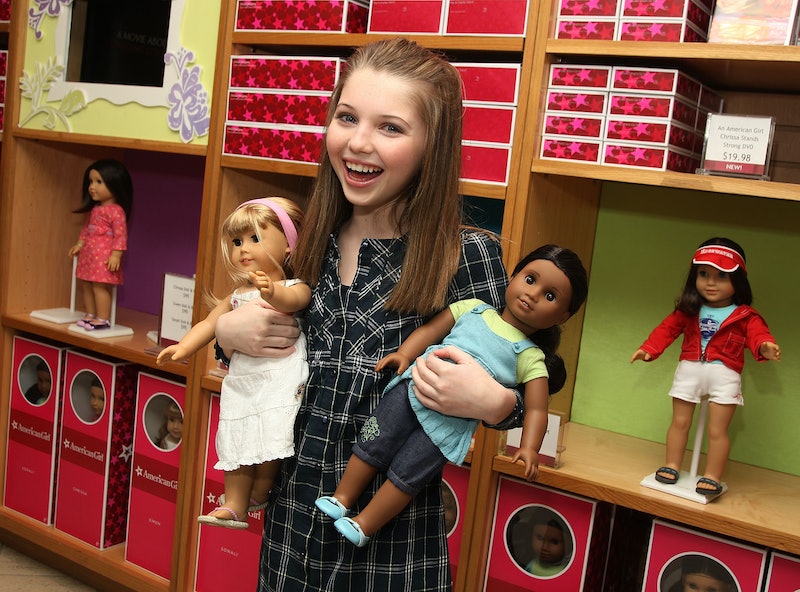 Like many a ‘90s kid, I was super into American Girl dolls growing up — which means that I am also super familiar with the many struggles all American Girl doll owners understand. To be fair, it’s more than a little bit absurd to pair the word “struggles” with the good fortune of being able to call a pricey toy your very own; however, as small children, we often failed to see the bizarreness of the situation, and so struggles, there were.

Not that I regret having an American Girl doll; on the contrary. I turned 7 the year I was gifted Samantha for my birthday, along with her “Meet Samantha” accessories set and the first three books of her series. I was already pretty into history, thanks to the fact that my mother was (and still is) a historian; having the books to read and the doll and her accessories to bring the stories to life, however, allowed me to learn about it in a new way — and in an incredibly effective and kid-friendly way, at that.

I was fortunate enough to collect Addy and all her books a few years later, too; I still have both dolls and their stories, and I’m planning on hanging onto them until I can pass them down to another kid in my life. They’re worth it — even if these 10 struggles still kind of make me wince.

1. Trying To Decide Which Doll Spoke To You The Most

Were you a Josefina person? Or more of an Addy one? Decisions, decisions!

2. Having The Same Doll As Another Kid In Your Friend Group

It was the childhood equivalent of showing up to a big event wearing the same dress as someone else. I’ll never understand why we were incapable of just going, “OK, let’s both be Felicity!”; for some reason, we were weirdly convinced that only one person could have (and pretend to be) one particular doll at the same time.

3. The Lack Of A Girl Of Today Option That Actually Looked Like You

They’re called “Truly Me” now (and they’ve had a few other names over the years, as well), but back when they debuted in 1995, the line of Dolls That Look Just Like You was called the “Girl of Today” collection. There was just one problem: They weren’t all that diverse. There are more options now, including a variety of skin tones — although they could still stand to offer even more diversity, because I mean, hey, the more inclusive, the better. It’s why the diabetic care accessory kit that was released at the beginning of 2016 is such a big deal — here’s hoping it’s the start of many more options to come.

4. Not Being Able To Get A Hold Of That ONE Book In The Series

Although I didn’t own all of the dolls (because seriously, who had that kind of disposable income available as a small child?), I did read all of the dolls’ book series, thanks to the fact that my local library stocked them. However, being at the mercy of whichever books were actually available at the library at any given time meant that I went ages having a giant hole in Molly’s story: The third book in the series was always checked out. And if your library’s copy of a particular book got flat-out lost? Forget it — you’re never finding out what happens next. Curses!

5. Wanting Desperately To Visit American Girl Place And Not Being Able To

First, the dolls were mail order-only. Then, in 1998, the first brick-and-mortar store opened, and hoo boy, did it sound like a magical place! There was just one problem: It was located in Chicago, so if you didn’t live in the area… too bad for you. I’m not ashamed to admit that I visited the American Girl Place location in New York a few times as a grown-ass adult, but I still wish I’d been able to see it when I was a kid.

6. When You Dressed As Your Doll For Halloween And No One Knew Who You Were

I realize this may not be a struggle anymore — everyone knows what an American Girl doll is now — but back in the early ‘90s in particular, the norm was for people not to know what an American Girl doll was, let alone who each of the characters were. So much for that painstakingly accurate Kirsten costume you spent so much time putting together, looped braids and all.

7. When You Lost One Piece Of Your Favorite Accessory Set

Samantha’s watercress sandwich? Addy’s chalk slate pencil? One of the animals from Felicity’s Noah’s Ark set? Woe betide you if you lost any of them. It just wasn’t the same without those details.

Samantha: An American Girl Holiday debuted my sophomore year in college, and my roommates and I definitely all watched it together as a way to decompress after studying our heads off during finals season. We were also all just a little bit disappointed in it — not because it was necessarily bad, but because there’s no way any movie could live up to the world we’d built up in our heads, thanks to a steady childhood diet of books and imaginative play. Ah well; can’t win ‘em all.

9. When Your Favorite Doll Was Retired

RIP my BFF Samantha — except hey, at least the dolls un-retire on occasion. But that comes with its own issues, because…

10. Not Being Able To Deal With The Historical Character Reboot

At the risk of sounding like an old fogey, I’m just going to go out and say it: The original historical character line was far superior to the “BeForever” reboot of it that launched in 2014. Gone are the series of books that told each character’s story, introducing girls both to the historical eras in which the characters lived and the important lessons they learned as they grew up; gone are the playsets that helped recreate each book’s story; gone, essentially, is all the context that made these dolls so unique. They’re just toys now, and that makes me kind of sad.

But at least us '80s and '90s kids had them the way they were — and if we play our cards right, we can pass both the dolls and their stories down to the next generation.