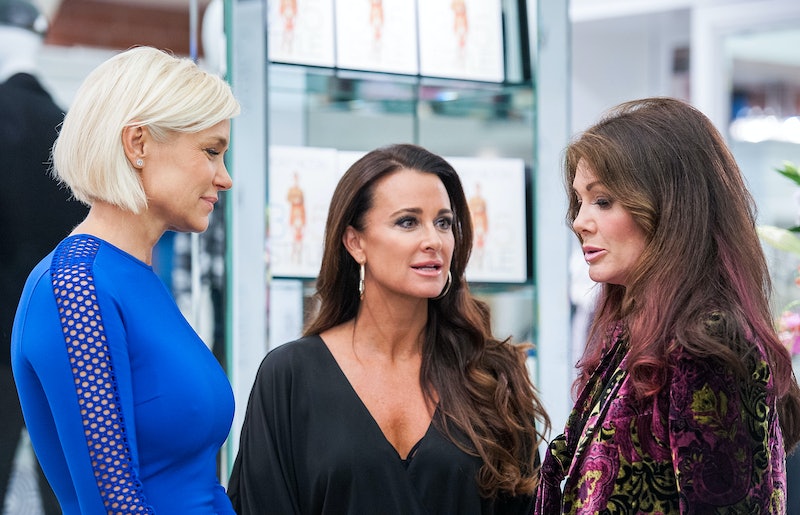 People always hate on me for watching so much reality TV, but I can't help it! I have always found it so fascinating to see how other people live their lives — especially people who are super rich. Was Biggie right when he rapped "Mo Money Mo Problems" or does cash alleviate a lot of life's issues? Watching Real Housewives always brings this question to mind. Sure, the women on the show are more wealthy than I will ever be, but if you watch long enough, it becomes pretty clear who is really well off and who is just lucky enough to hang with the rich crowd. So, out of everyone in the entire franchise, who is the richest Real Housewife? Money is not everything, but I just can't help wondering when it comes to this group of showy ladies.

Usually the Real Housewives are compared within their shows because that is how we are used to seeing them. It's a whole different game when you involve all of the women from all of the cities and see who is on top when it comes to her net worth. Are the top earners isolated in one city or is it spread out evenly?

This is how the top five shakes out.

Both of these women seem to have the ideal balance between work and family time. They are both stay-at-home moms who do other work on the side. (They also both have super rich husbands, which helps them have this kind of freedom with their schedules.) Everything is working out well for Heather and Kyle since they both have estimated net worths of $30 million, according to Celebrity Net Worth. And while we can't accept that figure as exact — only these ladies know what's in their bank accounts, looking at all they do, the figure seems pretty on point.

Obviously, they are both doing pretty well as popular reality TV stars. They both subtlety "thank" brands for their products on Instagram. Kyle has her own clothing store called Kyle By Alene Too, and Heather has her own skincare line sold on EVINE. And while Heather is more of a seasoned actress, they both make appearances on various TV shows. These two seem to pick and choose when they work, and it's something I'm pretty jealous of. Oh, and that $30 million net worth also makes me pretty envious.

Kandi is arguably the most humble out of all the Real Housewives. She is super rich from her years of success in the music industry as a singer, songwriter, and record producer. She has written timeless hits like "No Scrubs" for TLC and "Bills, Bills, Bills" for Destiny's Child. She also has other business ventures like her adult toys line, Bedroom Kandi, and a clothing store called Tags Boutique.

I'm not sure if her split from David Foster is going to increase or decrease her net worth, but Yolanda Hadid will never be hurting for money with her last reported net worth coming in at $45 million, according to Celebrity Net Worth. Again, we have to take this report with a grain of salt, but I can see how her dollars add up to that astronomical amount. Aside from being a Real Housewife and the former wife of both a mega rich music producer (David Foster) and an extremely successful real estate developer (Mohamed Hadid), Yolanda was a model for a very long time in addition to working as an interior designer. So basically, Yolanda has lived many lives and all of them resulted in her being super wealthy.

Carole Radziwill has supposedly raked in a $50 million net worth, according to Celebrity Net Worth. She has really lived such an exciting life while she was amassing a great fortune. Her late husband, Prince Anthony Radziwill, was part of Polish royal family and this obviously involves some great amount of money. This marriage also meant that she married into the Kennedy family (on her husband's mother's side) and I just think of "money" when that name is mentioned. Aside from her marriage, Carole is a very successful author and journalist. She writes books, had a column in Glamour magazine, and worked for ABC News. She has really done it all... and "it all" would appear to come with a rather larger paycheck.

It is no surprise that Lisa Vanderpump is at the top of this list with an estimated $65 million net worth, according to Celebrity Net Worth. Lisa is always working and has so many businesses. She has 26 (and counting) restaurants and bars — and she doesn't just sell any old liquor at her restaurants either. Lisa has her own vodka brand called Vanderpump Vodka and a wine brand called LVP Sangria. She is a popular reality show star on both Real Housewives of Beverly Hills and Vanderpump Rules. She has a line of home goods at Joss and Main. Lisa even has a line of pet toys and accessories called Vanderpump Pets. Unless someone super rich joins the franchise, I feel like Lisa is going to stay at the top of the list since she never seems to stop working.

This top five list is pretty astounding. All of these women are always hustling and chasing after those dollars. But I am not at all shocked to see that Vanderpump is number one.

More like this
Which RHODubai Housewife Has The Biggest Net Worth?
By Hugh McIntyre
These 10 Wild Real Housewives Fights & Moments Are Andy Cohen’s All-Time Faves
By Grace Wehniainen
Tamra Judge & Vicki Gunvalson Gave A Hopeful “Tres Amigas” Update
By Brad Witter
RHOA’s Kenya Moore Said Her Friendship With Marlo Hampton Is “Too Far Gone”
By Brad Witter
Get Even More From Bustle — Sign Up For The Newsletter