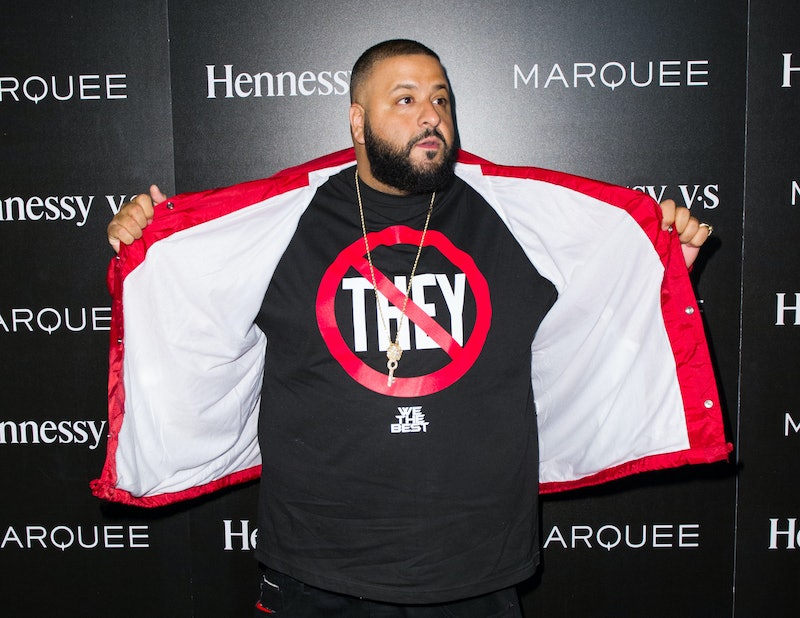 Like many social media frenzies and phenomenons, DJ Khaled's rise to reigning social media king seemed to happen FAST. I am from Miami, DJ Khaled's hometown, and a few months ago I started to hear my brother, cousins, and random friends talking about the "major keys." I was still not enlightened enough to what they were talking about so I ignored it for a bit — until it got too big to ignore. Turns out the 40-year-old producer's Snapchat was becoming an inspirational medium for many viewers, so I did some digging to figure out what DJ Khaled's Snapchat name was, so I could become part of the conversation.

It looks like October 2015 marked the beginning of the DJ Khaled Snapchat phenomenon, when he posted an Instagram with the caption featuring his Snapchat username: "Follow me on snapchat djkhaled305 I just let a snap go."

Well, that name is pretty straightforward and easy for people to find, which is a big contrast to Justin Bieber's snapchat name, "rickthesizzler." (I won't even begin to ask about that one.) Khaled's mini-motivational snaps have made a dent in culture, recently in the form of a speech for Jeb Bush in a Jimmy Kimmel sketch. The keys are real, y'all!

Now that you know DJ Khaled's snapchat name, here is some of the best advice and keys to success you can expect to hear form him on the daily if you give him a follow.

Dental Hygiene Is The Most Important

There is nothing wrong with having a lean cuticle.

You Need To Pamper Yourself

Go ahead and get that massage. You deserve it!

Mother Earth is worthy of respect. Show her kindness.

Be Grateful For Every Day

Never take any day for granted because you are alive and well!

Always Remember That You're A Star

You were born to be one.

If a bowl of Cinnamon Toast Crunch is involved, I will always be in.

Wow, DJ Khaled's keys to success are actually my entire philosophy on life, so pardon me as I succeed.

More like this
'Love Island's Rachel Finni Has Had Her Say On Those Apologies
By Frances Stewart
Will Beyoncé Be At The BET Awards To Perform “Break My Soul” Or Attend The Show?
By Jake Viswanath
Fans React To Kelly Holmes’ “Extraordinary” ITV Documentary
By Sam Ramsden
Twitter Has *A Lot* To Say About Justin Timberlake’s Beat Ya Feet Dance
By Sam Ramsden
Get Even More From Bustle — Sign Up For The Newsletter