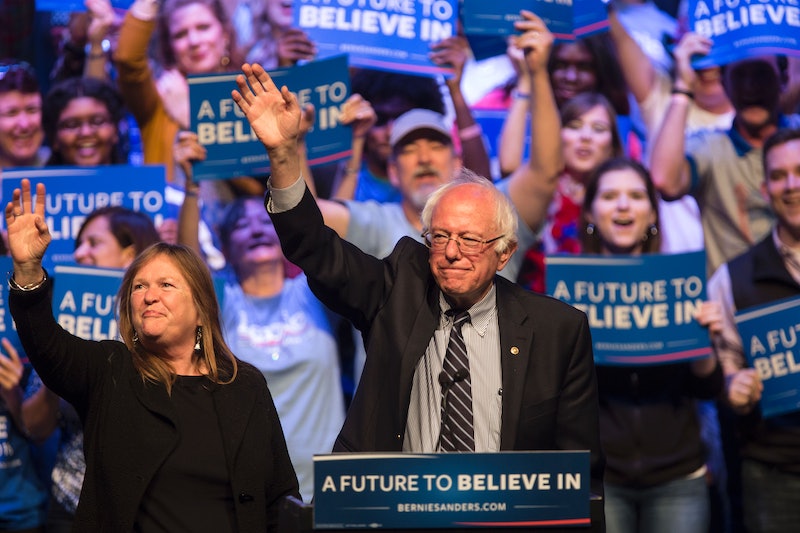 Democratic presidential candidate Bernie Sanders has a few things to keep his eye on this March 15. With the future of his campaign heavily depending upon the results of Mega Tuesday's primary elections in states like Florida, Ohio, and Illinois, you could say that he would likely be preoccupied come Tuesday evening. But primary pandemonium doesn't mean that the candidates — the legitimate ones, at least — forget the issues that matter to millions of Americans. And the Vermont senator proved to everyone feeling (and not feeling) the Bern that he's got his priorities straight, since Bernie Sanders' March 15 tweet about reproductive rights was completely spot-on.

Sanders published the tweet just a few hours before the polls closed in Florida, the first state of the night expected to produce results. And the short but sweet statement gives the whole conversation on reproductive rights and abortion a bit of perspective. The candidate wrote, in what can only be read while imagining that curmudgeonly Bernie voice, that everything would be different if the tables were turned when it comes to making babies. "If men were giving birth to babies, there would not be a lot of discussion regarding the right to choose," he tweeted.

Way to remind Americans of the very real double standard, Bern. The Tuesday evening tweet actually wasn't the first instance of Sanders making the point; he first gave the very same response after being asked at a campaign rally whether the same kind of controversy around abortion would exist if Planned Parenthood was instead associated with men's healthcare. Sanders replied by taking the attendee's question not so much as a hypothesis but as fact, and said he would "take it a step further" with his remark on men having children.

Throughout his campaign, Sanders has enthusiastically voiced support for women's right to choose whether or not to have an abortion. However, despite the fact that a SCOTUS case concerning Texas abortion clinics is ongoing, Clinton and Sanders had not been questioned on the subject at any televised debate until they appeared at a March 7 town hall in Detroit hosted by Fox News and moderator Bret Baier posed such a question to the candidates. Sanders was quite clear as to his own point of view: "I happen to believe that it is wrong for the government to be telling a woman what to do with her own body. They want to tell every woman in America what she should do with her body."

Maybe the lack of attention on the issue is what inspired Sanders to bring reproductive rights into the spotlight on one of the biggest days of the year for the presidential campaign.