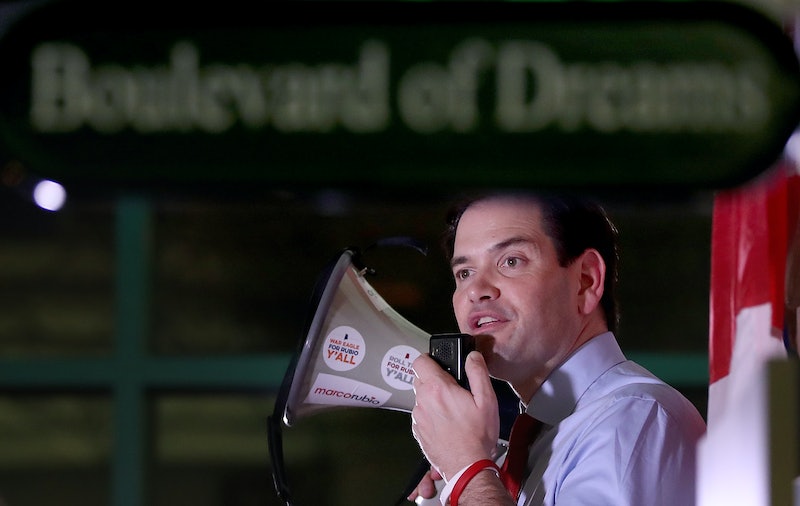 For some time, Florida-born Marco Rubio believed that he had the Sunshine State's primary election in the bag, which is generally seen as a clear pathway to a presidential nomination. Even in the days leading up to the March 15 vote, the Florida senator carried himself with an unwavering optimism which could have possibly led voters to also believe that, maybe, he had a chance at beating out GOP frontrunner Donald Trump. But in one optimistic beat, Rubio said one thing which he probably now regrets most.

Last week, Rubio told voters that he "[believes] with all my heart that the winner of the Florida primary next Tuesday will be the nominee of the Republican Party.” Of course, this would typically be great self-congratulatory news for a candidate representing such a state in the Senate. But Rubio has had a consistently difficult time running an establishment-based campaign against the off-the-cuff Trump. What could have been an easy victory for many instead turned into a substantial loss. The senator was forced to eat his own words and effectively hand over the win to his most bitter rival, who came in with an 18.6 percent lead over Rubio.

When Rubio said those words, chances are he was not thinking that he would be dropping out of the presidential race immediately following the Florida primary results. Yet there he was on stage, giving a concession speech that, perhaps a little sadly, still got heckled by Trump supporters. And if his words hold true, the thing he and many establishment Republicans seem to fear the most will be coming to panicked fruition during the Republican National Convention in July.

The senator seemed at least partially aware of this as the Florida results loomed last night. He told a crowd of supporters that he regretted aspects of his campaign, particularly how he conducted himself around the attacks Trump threw at him. He said to supporters:

The fact that I'm here now in front of those cameras comes with responsibility, and I'll confess, I've learned that myself. A few weeks ago, in response to some attacks about the size of my ears and something else, I responded in kind with an attack about — I'm not going to repeat it — stuff. I felt terrible about it. I realized that win or lose, there are people out there that see what I'm doing and follow it as a role model.

It seems that Rubio also regrets his other significant dealing with Trump — though at the time, he seemed unprepared to admit that defeat was closely on the horizon. By basically handing him in the nomination through his gaffe, Rubio all but secured a Trump nomination come this July. And when considering Rubio was perhaps the GOP's best chance to defeat Trump, that is regrettable indeed.