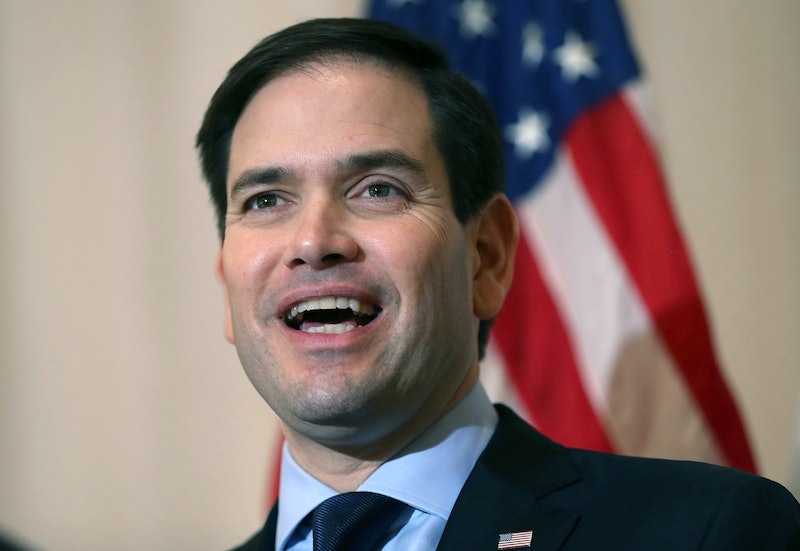 After a huge loss in Super Tuesday 3's Florida GOP primary, Marco Rubio officially suspended his 2016 bid for president. With the senator out of the race, his fans will have to reevaluate the remainder of the Republican candidates, and whom Rubio's supporters will vote for now could make a big difference in the party's primaries going forward. So will it be Donald Trump, Ted Cruz, or John Kasich?

If Rubio's fanbase jumps on the Trump bandwagon, then the GOP frontrunner's lead would become even stronger. However, it's very unlikely that those mourning the end of the "establishment candidate" will switch over to the real estate tycoon's camp. Although Cruz has tried to set himself apart as the best alternative to Trump, Rubio was touted as Trump's true polar opposite within the Republican party.

Rubio actually said himself who his supporters are most likely to back now that he's out of the race. In an attempt to rally Ohio Republicans behind anyone but Trump, he said during a press conference in Florida last week that "John Kasich is the only one who can beat Donald Trump in Ohio. If a voter in Ohio is motivated by stopping Donald Trump, I suspect that’s the only choice they can make."

In a lineup made of Trump, Cruz, and Kasich, the Ohio governor's beliefs and ideologies align with Rubio's the most. Although Cruz is also a member of the Senate, he doesn't follow along with GOP leaders the same way Kasich and Rubio do — he was actually the anti-establishment candidate before Trump swooped in and outdid him on that front.

Of course, Kasich's campaign was happy to accept Rubio's support in the Ohio primary. Kasich's chief strategist, John Weaver, immediately sent a fundraising email claiming that Rubio's comments proved that the party was uniting around him. So it's probably safe to say that the candidate won't mind taking in lost Rubio supporters who are looking for a new Republican to vote for.