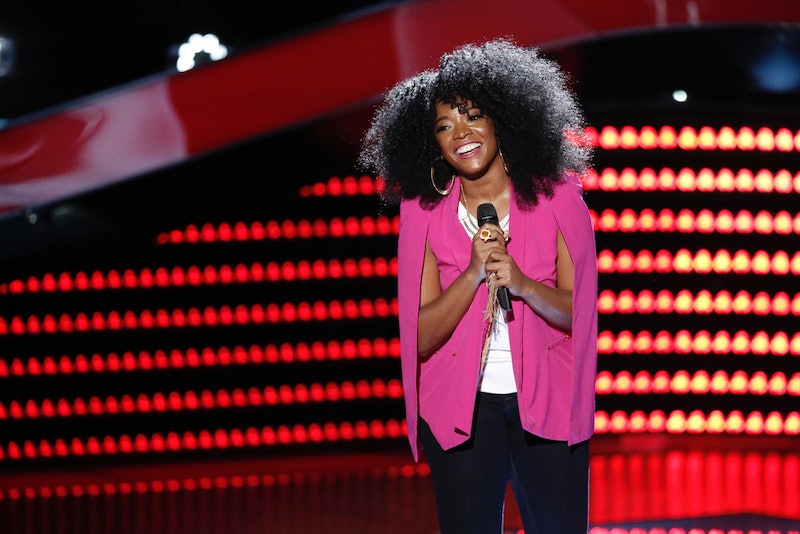 Ahh, the Battle Rounds — the most savagely entertaining few nights on television. The battles have returned to The Voice in it's tenth season, and they're even better than I ever could have imagined. One especially standout battle was between Team Christina's Tamar Davis and Shalyah Fearing. The duo duked it out to "Lady Marmalade," a song that both their coach AND advisor, Patti Labelle, have sung in the past. The stakes were high, but the girls certainly delivered.

This was one of the hardest battle rounds to judge so far this season. Going into it, Davis seemed like the clear winner — she was an original member of Destiny's Child, after all. But Fearing gave her a run for her money. Watching their battle was similar to watching a tennis match — the ladies went back and forth the entire time. When Davis had the floor, it seemed like she would win. That is, until her Fearing took over and brought the song to the next level. The two were neck and neck the entire time, so it really came down to Aguilera to make the final decision.

In the end, Aguilera went with her gut and chose Davis — and it was the right choice. It came down to the fact that Davis has the experience and professionalism that Fearing doesn't. At 15, Fearing still has plenty of time to improve and chase her dreams. For 35-year-old Davis, though, this could be her last shot at a solo career. Aguilera wants to help her get there. Davis already has the tools, she just needs to build her star power — and Coach Aguilera will help her do exactly that. Davis has the talent and drive to make it, she just needs the right door to open to get there. Something tells me that The Voice might just be that door.

More like this
What Is Ariana Grande's Net Worth? When It Comes To Money, She Has No “Problem”
By Hugh McIntyre
Travis Barker Has Been Hospitalised In California With Reports Of Pancreatitis
By Sam Ramsden
How To Listen To The 'Love Island' 2022 Soundtrack
By Liv Facey and Sophie McEvoy
Watch Emma Raducanu’s Incredible Response To Her Early Wimbledon Exit
By El Hunt
Get Even More From Bustle — Sign Up For The Newsletter