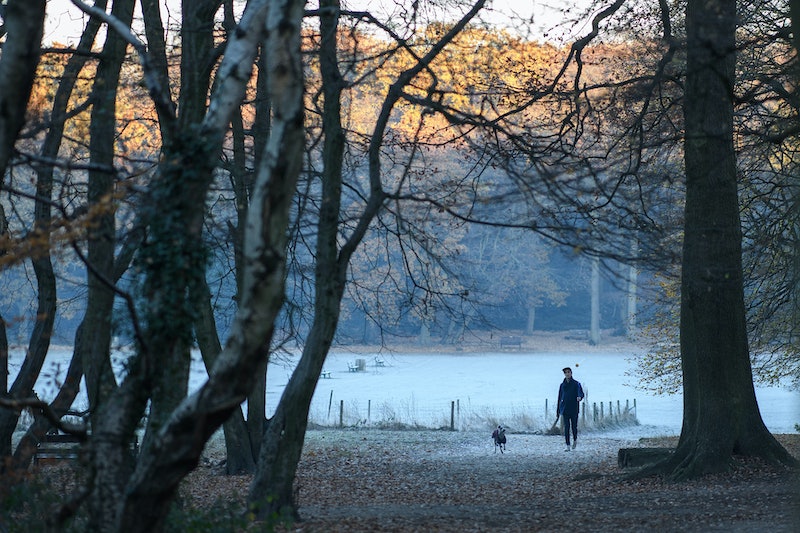 I love fairy tales. I love folklore. I love all of the cool little tales that people from the olden days used to tell each other around a fire as entertainment. As a modern day society, our love of the fairy tale has yet to die. We tell ourselves that our own love stories are fairy tales. Women on the Bachelor tearfully confess that they have found their prince charming every single season. Ninety percent of Disney princesses would not exist were it not for fairy tales.

In fact, an entire subgenre of books would not exist were it not for these marvelous and magical stories. I remember curling up and reading from my old book of Grimm's fairy tales. I was all about it, and as I grew, I became increasingly more fascinated with fairy tales as a genre.

This is how I came to learn that fairy tales are actually terrifying. And I am not even talking about the problematic tropes that perpetuate rape culture. I'm talking about some honest-to-goodness horror movie nightmare stuff. It's dark. Fairy tales are messed up. Remember Cinderella? Well at the end of the original story, a bird pecks out the eyes of her stepsisters after they mutilate their own feet. In the original tale, Little Red Riding Hood is tricked into cannibalism and eaten — and no, the Woodsman does not come to help. Those are just the famous stories. The stories we all know because they're ingrained in our public consciousness. The Brothers Grimm compiled hundreds of tales from oral histories that varied from town to town, and not all of them were Disney movie material.

To prove my point, I've compiled five fairy tales that you may not know, but are actually horrifying.

1. How Some Children Played at Slaughtering

One day in a village, a group of children got together to play a bit of pretend. These children each took on a role; one was a cook, one was a cook's assistant, one was a butcher, and one was a pig. Together, they murdered the child who was playing the pig. Yikes. The horrified townspeople arrested the child who played the butcher and put him on trial for murder. But the judge didn't actually know if he could punish a murderer who was so young. So he cooked up an idea to decide whether or not the child was innocent. The next day he brought a ripe, shiny apple and a fancy gold coin. If the child went for the apple, which looked delicious, the judge figured the child was too naive to be capable of murder. But if he went for the coin, then he clearly understood high concepts like wealth and had enough maturity to be capable of murder. As soon as the boy was presented with the two items, he immediately reached for the apple, was proven innocent and set free.

2. The Girl Without Hands

Once upon a time, a miller was offered wealth by the Devil. The only stipulation was that the miller was to give the Devil whatever was standing behind his mill. The miller knew that the only thing that stood behind his mill was an old apple tree, so he accepted, only to learn that his daughter had been standing right behind the mill at that very moment.

The Devil didn't come back for another three years, and in that time, the maiden blossomed into a beautiful woman who was completely free of sin. This obviously didn't work for the Devil, who needed her to be full of sin so that he could claim her. So he told the miller to forbid her from washing, so she could get dirty enough for him to take. This didn't work, since the pious maiden would cry and cry, and her tears cleansed her hands. It was impossible for the Devil to take her, so he ordered the miller to cut off her hands. Clearly in the running for Father of the Year, the miller did as the devil requested.

But the daughter wept on the stumps and made those clean! At this point, the Devil just gave up. So the maiden set out into the world to find a new place to live. She eventually ran into a king, who fell in love with her, gifted her an awesome pair of mechanical hands, and married her. She got pregnant just before the king set off for war.

When the king's mother sent news of the baby's birth to her son, the Devil intercepted the letter and changed the message. He wrote that the queen had given birth to a terrible and deformed child. The king wrote back saying that they should care for the child anyway. But the Devil once again altered the message to say that the queen should be killed and her heart eaten. Horrified, the queen fled with her baby to a hut in the forest. When the king returned, he looked for her, but instead found a woman who looked exactly like her — but with natural hands. The queen explained that her good heart made her hands grow back, and she showed him the mechanical hands that had fallen off. The two lived happily ever after...

A vicious boar was terrorizing the kingdom, and the king offered his only daughter's hand in marriage to whomever killed the boar. News swept throughout the land and reached the ears of three brothers. The eldest brother was shrewd and smart, the second was average, and the third was good-hearted and naive. The brothers split up on their quest to kill the boar, and the youngest went off alone. The second he stepped into the forest where the boar lived, a little man came out of nowhere with a black lance and said, "Take this, and if you go after the boar with no fear you will kill him." The innocent man, having no fear in his heart, struck the boar dead with his lance and joyously brought it back to the village. There, he ran into his two brothers in a bar having a drink, and they all got drunk to celebrate. On the way home from their revelries, the two older brothers fell on the innocent and naive one, beating him to death and burying him in a pauper's grave. The eldest brother took the boar, and went to claim the daughter's hand.

Many years later, a shepherd was walking down the road and found a little white bone lying in the dirt. The bone was so pure and white that the shepherd took it home and turned it into a mouthpiece for his horn. However when he blew into the mouthpiece, it began to sing all by itself:

Dear shepherd blowing on my bone

Hear my song, for I want you to know

My brothers killed me years ago!

They buried me by the brook that flows

and carried off the dead wild boar

and won the king's lone daughter.

The shepherd took the song to the king, who ordered a search. Soon the young man's skeleton was found, and the two murderous brothers were drowned in the river. The good brother's bone was buried in a beautiful churchyard, and, I suppose, the princess dodged a bullet.

A miller wanted to marry his beautiful daughter off to a wealthy man. When a rich bachelor came to town and presented himself as a suitor to his daughter, the miller gave his permission right away. One day, his daughter went to visit her betrothed in the woods. However, upon arriving at the house, she found a worried old woman and a bird, who called out, "Go back! Go back! Thou bonnie bride! Nor in this house of death abide!" Ominous.

The old woman quickly explained that the men who lived in this house would be back, and if they found her there, she would be killed and eaten. The woman was forced to hide as her betrothed and a group of bandits arrived with another girl. She watched as they cut her up, cooked her and ate her.

When the wedding day arrived, everyone sat around telling stories, and the bridegroom urged the miller's daughter to tell a story of her own. The bride told the entire story of her night in the bandits' house, pausing every so often to let him know, "This was only a dream, my love!" When she got to the part about the gold ring, she produced the finger from her pocket. The bridegroom and his band of murderous cannibals were all put to death.

5. The Old Woman Who Was Skinned Alive

This is the only non-Grimm offering, having been written by Giambattista Basile in the 17th century. One day, a king meets two disturbingly hideous and deformed old hags. The women have become convinced that they are actually two beautiful and delicate maidens, because their appearances are hidden behind a wall.

After kissing their fingers through a keyhole, the king begs to spend one night with either of the maidens, and one of the women agrees — under the condition: he must take her in complete darkness, as she is far too modest to expose herself to him. The king agrees, and waits for her in a completely blacked out room.

In an effort to feel more youthful, the old woman takes all of her loose skin and ties it behind her back. She sneaks into the room and gives herself to the king. When all is said-and-done, the king discovers her saggy little secret. In his rage, he throws her out of a window. Luckily, her sagging skin gets caught in a tree, bracing her fall. A few passing fairies find this so hilarious that they bestow her with gifts of incredible beauty and intelligence. The king looks out the bedroom window to see a gorgeous woman sitting in his tree, so he immediately asks for her hand in marriage.

Now, the newly-minted queen does not want to give away her secret to her sister, so she simply tells her that she's been skinned alive. Wanting the same sort of beauty for herself, the other old woman goes to a barber and asks to be skinned alive... and promptly dies of blood loss. At least the king and queen live happily ever after, right?

More like this
These 25 International Horror Movies On Netflix Prove Fear Is A Universal Language
By Bustle Editors
Aemond Targaryen's Fate On 'House Of The Dragon' Is Full Of Revenge In The Book
By Grace Wehniainen
This Episode 6 Moment Foreshadows Viserys' Fate On 'House Of The Dragon'
By Grace Wehniainen
Ling Ma Is Back — This Time, With Yetis
By Kate Dwyer
Get Even More From Bustle — Sign Up For The Newsletter