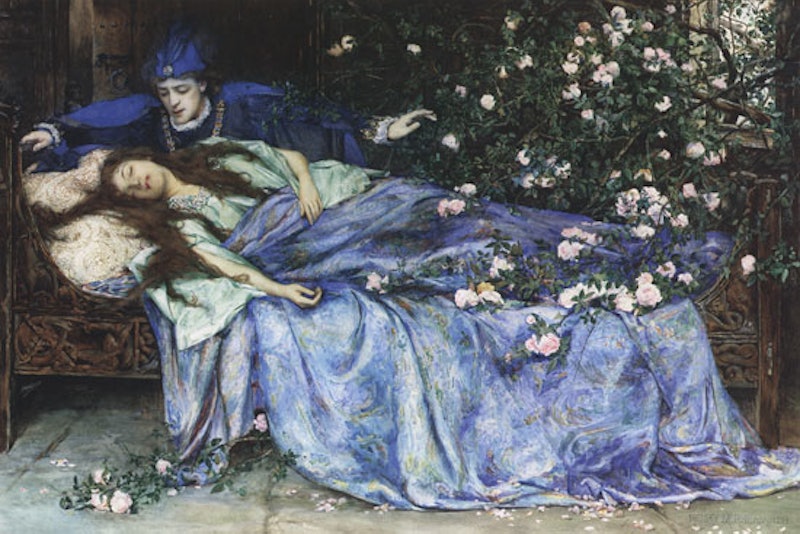 When we talk about the ways in which pop culture encourages misogyny and objectification, we often think of modern music, television, and movie tropes that perpetuate rape culture. But the truth is, rape culture — a set of beliefs and practices that normalize, naturalize, and excuse sexual violence — is as old as fairy tales. From princesses who are devoid of agency and depend on knights in shining armor to save them to kidnappings and nonconsensual kisses that are depicted as romantic, characters and situations that diminish women's autonomy and valorize domination abound in some of our culture's oldest stories, and they still affect us today.

Though the term "fairy tale" might make you think of medieval times, many of these old stories have found their way into modern storybooks and movies. The famous 1812 collection Grimm's Fairy Tales , for example, contains many stories like "Cinderella," "Hansel and Gretel," "Snow White," and "Sleeping Beauty" that were around long before the book's publication and that children still hear today.

These stories can be a lot of fun, and they're not all entirely degrading to women. In fact, unlike a lot of plots in the media today, many center on female protagonists and their own relationships and ambitions. As artist Natalie Frank pointed out through a series of drawings, many of these stories were based on folktales told by women and address issues that women specifically deal with.

But they do contain a few distinct tropes that become problematic when we romanticize them. Here are some of them.

1. The Knight In Shining Armor

The knight in shining armor is a trope that extends back to the legends of King Arthur and is now a common expression to refer to a man who saves a helpless woman. From classic fairy tale movies from the '30s, '40s, and '50s to films with modern twists made in the '90s and beyond, our media is full of women being rescued by princes. Even movies not explicitly inspired by fairy tales use this trope. In Pretty Woman, for example, Julia Roberts's character Vivian confesses that she always dreamed of being rescued from a tower by a knight on a white horse. At the end of the movie, the protagonist exits a white limo and climbs up her fire escape, alluding to this fantasy.

So what does this trope have to do with rape culture? It denies women agency and perpetuates the belief that women cannot initiate anything, which teaches men to make decisions, including sexual ones, without women's input. The knight tradition also includes chivalry, a form of benevolent sexism that encourages men to act on behalf of women and behave in accordance with gender roles.

In the original "Snow White" tale narrated in the video above, the prince decides to take Snow White home with him when he sees her lying in a glass coffin and convinces the dwarfs to let him take it, as if a woman's body is an item to be exchanged or bartered for. The idea of running off with a dead body because you find it attractive is creepy in of itself and completely objectifies women — but what makes it creepier is the fact that she's actually still alive, rendering the prince's actions equivalent to kidnapping. Snow White may have fallen in love with the prince when she woke up, but she most definitely did not consent to being there with him in the first place.

The classic trope of the prince wakine the princess up with a kiss is problematic all on its own for the simple reason that a sleeping person cannot consent. But the version that comes to mind for most of us when we think of stories like "Sleeping Beauty" is actually the G-rated version of it. In Italian poet Giambattista Basile's "Sun, Moon, and Talia," which "Sleeping Beauty's" Brothers Grimm predecessor, "Little Briar Rose," is based on, the prince literally rapes the princess while she's asleep — and, in fact, she wakes up because she is giving birth to his children. The trope of the sleeping princess woken up by a kiss shows up in numerous tales, and none make any mention of the fact that kissing somebody who cannot consent, whether because they're sleeping, drunk, or whatever, is sexual assault.

4. The Beast That Transforms Into A Prince

The first rendition of "Beauty and the Beast," most likely written by Gabrielle-Suzanne Barbot de Villeneuve, is pretty much the same story you're already familiar with: The Beast holds a woman's father hostage in his castle until she takes his place so that he'll let him go. Gradually, she realizes maybe the Beast isn't all that bad a guy after all, but there's still one problem: He's a beast. He's rewarded by his kindness and perseverance, though, by earning the woman's affections and then turning into a human she can actually fall in love with.

While it doesn't explicitly endorse Nice Guy Syndrome, this plot line encourages its underlying belief: That love is fair and "good guys" will get what they want in the end if they just hold out and treat their love interests with basic respect. This implies that if a man pays his dues and still doesn't get what he wants from a woman, it is his right to take it. Perhaps it could be argued that the Beast is the original dogged nice guy. The trope of the frog that turns into a prince also teaches the lesson that perseverant guys will get the "princess" in the end, although in the original Grimm version of "The Frog Prince," the frog becomes a prince when thrown into a wall — which is what many people would rather do to men with Nice Guy Syndrome than kiss them.

More like this
25 Inspiring Quotes From Black Women To Celebrate Black History Month
By Kyli Rodriguez-Cayro and JR Thorpe
Twitter Is Identifying With Sally Field & Jane Fonda’s Friendship In New Viral Video
By Jake Viswanath
24 History-Making Black Women You Probably Didn't Learn About In School
By Ayana Lage and JR Thorpe
Here's How Netflix Should Adapt Prince Harry's Memoir Into A Movie
By Ginny Hogan
Get Even More From Bustle — Sign Up For The Newsletter
From hair trends to relationship advice, our daily newsletter has everything you need to sound like a person who’s on TikTok, even if you aren’t.