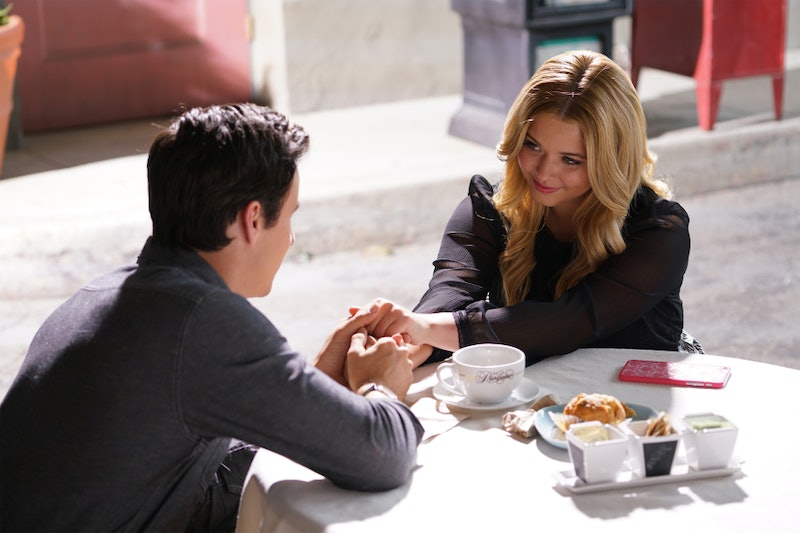 Finally, a Pretty Little Liars reveal that’s really ready to knock our socks off. Just when we thought that Ali had maybe found a bit of true love in Dr. Elliot Rollins, I. Marlene King ripped the rug right from underneath us. It was revealed in the Season 6 finale that Dr. Rollins is working with Mary Drake, Charlotte’s birth mom and Jessica DiLaurentis' twin sister — and that's not all. He only married Ali to avenge Charlotte’s death, because Rollins was really in love with Charlotte all along. As an added bonus, he now controls half of the Carissimi Group, since he and Auntie Mary gaslighted Ali into thinking she was becoming delusional and needed to check herself into a mental institution. We were really lulled into a false sense of security with this one, weren’t we?

Here’s how it goes. Toby, Mona, and Spencer found records of a Mary Drake that gave a baby up for adoption while at Radley. The couple she gave it to? The DiLaurentis family, because Jessica was her twin sister. The baby? Charlotte DiLaurentis. While this didn’t make sense when they found the papers, it did make sense when the very involved booby trap the liars set up showed a woman that looked like Jessica DiLaurentis running through the forest. It’s Mary Drake. Later, after they successfully kidnapped Hanna, we saw Mary and Rollins (right out of a Detective Wilden costume) talking about how they successfully gaslighted Ali into committing herself. Now, Rollins controls half of the Carissimi Group, which Charlotte would have wanted because she and Rollins were in love. Now, Rollins has the cash and Mary has the revenge for her daughter’s death.

Does any of this make sense? Absolutely not. But does anything on Pretty Little Liars ever make sense? First things first, I hope that Hanna is okay, but I also hope that Ali is not committed in New Radley forever. Though she went in voluntarily, the nurse said that if the doctors thought that she needed to be hospitalized, she would have to stay there. I hope that doesn’t bode Ali’s story for the next season.