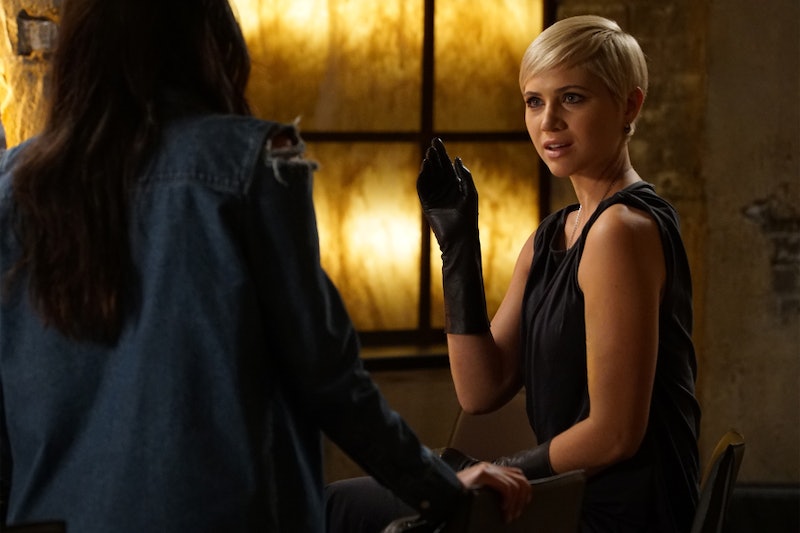 Well, now that we finally know who the twin is on Pretty Little Liars, it only makes sense for the series to introduce another faceless, potential villain into the mix. Tuesday night's "Hush... Hush, Sweet Liars" was probably the series' biggest finale yet and, after revealing that Jessica DiLaurentis has a twin on PLL , we were left with another mystery. At the end of the Season 6 finale, the Liars got a text from "A-moji." But, this time, the text had a new signature — A.D. — so, who is A.D. on Pretty Little Liars ? Well, just like Mary Drake, A.D. could also be hiding in plain sight and their presence might explain why Sara Harvey is still skulking around Rosewood.

The Liars have had a lot of questions about Sara's return to Rosewood since the Season 6b premiere and, for once, I think they might actually be right. We all know that Sara's been staying at the Radley — in Charlotte's old room, no less — and that she's been very invested in finding out what actually happened to Charlotte, but what if her bond is as deep as she's making it seem. Tuesday night's finale revealed that Charlotte was actually Mary Drake's — Jessica DiLaurentis' twin — daughter, who was adopted by the Kenneth and Jessica because she was born while Mary was a patient at Radley. Well, what if Sara is also Mary's daughter?

There are a couple of signs — aside from the fact that Sara seems to really care about Charlotte (almost as if they were sisters) and the Liars suspecting her of being "A-moji" — that could point to Sara being A.D. and the person who took Hanna from the motel. Back when they first escaped the Dollhouse, Sara made a comment about her mother being kind of crazy and not wanting to go home, but then she disappeared for awhile and never really explained where she went. She's also been very obviously spying on the Liars ever since she got back to Rosewood — could Mary have told her to do this? Could Mary and also Charlotte have tasked her with finding the secret room where Mary's Radley file had been hidden?

This connection would certainly explain why Sara's stuck around for so long on the show — something that most PLL fans still can't figure out. But could Sara really be so stupid as to believe that Hanna really killed Charlotte? I mean, Charlotte never would've fallen for that kind of crap. This is exactly the kind of mistake someone that's desperate to please their mother would make — just saying.

For more PLL theories, subscribe to Bustle's podcast Taking This One To The Grave.