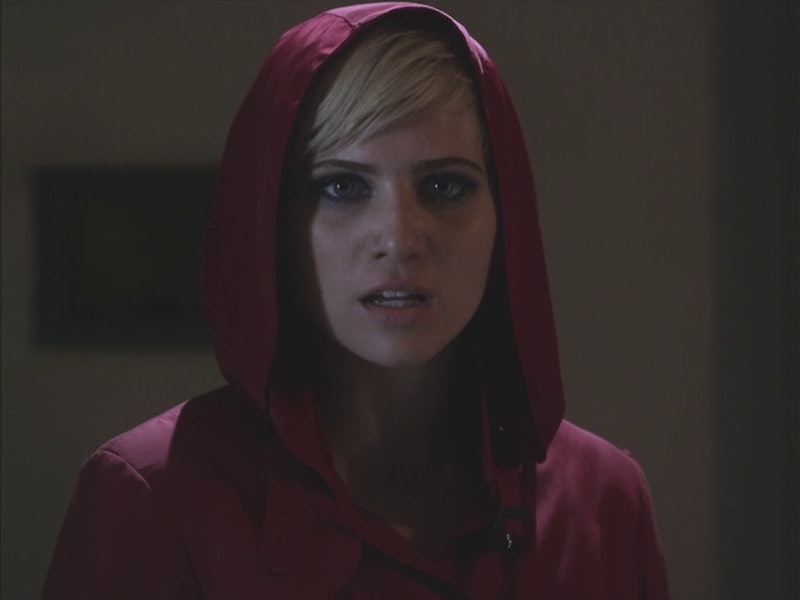 Five years after the Season 6A finale, plenty of things have changed in Rosewood. Radley has been transformed into a hotel (a perfectly natural use of a building that was once a corrupt and seriously creepy mental institution), Ali has become a high school teacher, and the Liars have understandably avoided their hometown at all costs. But, much to my dismay, we haven't seen the last of Sara Harvey on Pretty Little Liars. (Seriously, why couldn't she just go away?) The 6A finale threw fans for a loop when Sara, who had only been introduced in the season premiere, was revealed as both Red Coat and Black Widow. The Liars aren't buying her Stockholm Syndrome story and neither am I, so I have to wonder if Sara is B on Pretty Little Liars?

Granted, the list of suspects is pretty long at this point — but I think we should keep a close eye on Sara. We don't know what she's been up to during the time jump, but she's had five years to carefully plan out a revenge strategy. Although the Liars were absent from Rosewood, Sara was consistently kept in the loop about Charlotte's treatment and upcoming release — so she would have known for a long time that, eventually, a court order would force Aria, Hanna, Emily, and Spencer to come back to Rosewood together.

On the surface, B's message to Spencer that he or she "hides in plain sight" seems pretty straightforward — after all, we know this new tormentor has a full collection of creepy masks and uniforms. But, it could have other meanings — Sara is everywhere the Liars turn, seemingly to taunt them and remind them that she hasn't forgiven or forgotten about what happened on prom night. Perhaps B is in plain sight even when he or she is not donning a disguise. Furthermore, this message could be a clue to viewers — the fact that Sara's at the top of the Liars' suspect list has caused many of us to dismiss her as a possibility. Perhaps I. Marlene King is hinting to Pretty Little Liars fans that B is right in our own plain sight — because, let's be honest, she knows we're analyzing every clue.

Even if Sara wasn't a willing participant in Charlotte's reign of terror, she still would have picked up a lot of tricks during her time as Red Coat and Black Widow — so it would be fairly easy for her to step into A's shoes and begin tormenting the Liars at her first available opportunity. And, while we're on the topic of Black Widow, let's take a look back at this August 2013 tweet from King:

While this certainly doesn't equal definitive proof that Sara is B, it definitely indicates that her role on Pretty Little Liars is more complex than simply "Charlotte's helper." Plus, let's not forget that Varjack's phone number spelled out Sara Harvey's full name. Although many of us initially speculated that Sara was Varjack, we later learned it was one of Charlotte's aliases. However, it could be symbolic in Season 6B — the original Varjack is dead, but the person whose name was in the phone number is still alive and has taken over Charlotte's game.