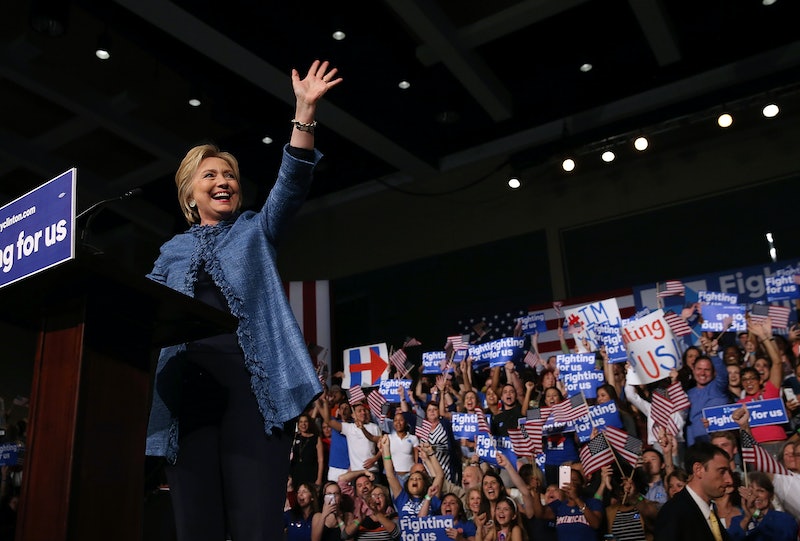 Democratic candidate Hillary Clinton has been known for helping to add plenty of new cracks in the proverbial glass ceiling, and Clinton's wins on Mega Tuesday ended up being no different. The former secretary of state had an especially good night, widening the delegate gap even further between herself and opponent Bernie Sanders. One win in particular stood out, as Clinton became the first woman in United States history to claim victory in the North Carolina primary election. She beat Sanders there with a near-14-point lead.

Clinton was expected to win in North Carolina — a true feat, considering no other female candidate had ever beaten out their male opponents in the state. If Clinton goes on to be the Democratic nominee, she will likewise be the first woman to ever represent a major U.S. political party in a presidential election. She needs less than 900 delegates to secure the nomination, and already has the backing of many of the party's superdelegates. Though Sanders is not likely to drop out, it seems that nomination will be hers unless there is major upset between now and the summertime.

Clinton's political career has largely been built around this push to break the barriers that have so unjustly held women back from politics for centuries. Since the 1980s, Clinton has worked to improve the lives of women — as an attorney and the First Lady of Arkansas, she pushed for an increase in accessibility to medical services and promoted educational reforms. She later went on to become the first to hold another title: the first female senator from New York.

Clinton went on to use her platform as secretary of state to continue to push for improvements in women's daily lives. Simultaneously, the Clinton Foundation released their "No Ceilings" Initiative, which culminated in a detailed report about the livelihood of women around the world. For instance, the report laid out how America is only one of nine countries in the world to not offer paid maternity leave. At the initiative's launch, Clinton stated:

We’re going to be about the business of making sure that those ceilings crack for every girl and for every woman around the globe. So let’s get cracking.

So this win in North Carolina on Mega Tuesday certainly isn't the first time Clinton has gone about cracking part of the glass ceiling. And it looks as though if she has any say in the matter, she'll keep on cracking until the ceiling shatters entirely.