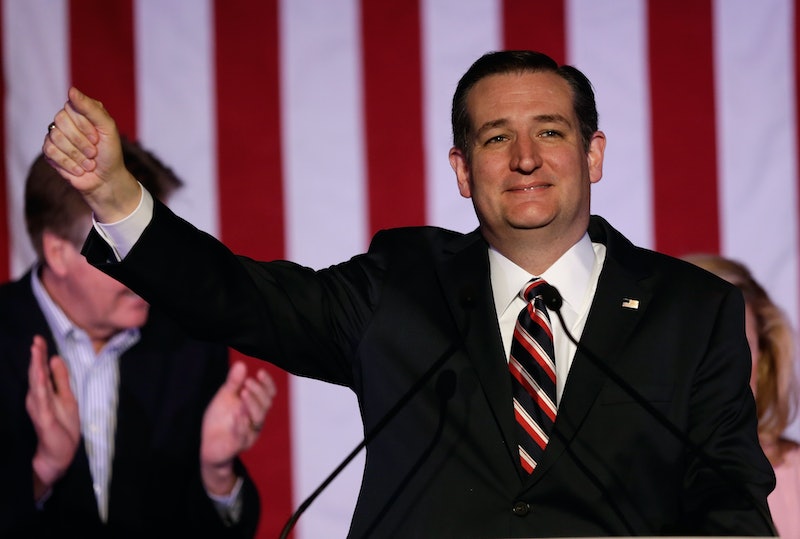 The third "Super Tuesday" of 2016 is finally over, and that means we're one step closer to knowing which two presidential candidates will be facing off in November. The results more or less solidified the status quo: Donald Trump and Hillary Clinton confirmed their frontrunner statuses with big wins across the board, and Marco Rubio confirmed his status as a disappointing candidate by dropping out of the race entirely. But what about the junior senator from Texas? How many delegates did Ted Cruz win on Super Tuesday 3?

The full results from Missouri are still coming in, but Cruz won at least 26 delegates on Super Tuesday 3, thanks to his second-place showing in North Carolina. As of this writing, he's running neck and neck with Trump in Missouri, and that will net him some share of the state's 52 delegates as well.

But make no mistake: From a delegate standpoint, Super Tuesday 3 was a disaster for Cruz. Donald Trump dominated Florida and Illinois, and as a result, he walked away with at least 161 delegates at the end of the night — and he'll have a few more once the Missouri results are in. This means Trump actually expanded his existing delegate lead over Cruz on Tuesday, bringing himself that much closer to the 1,237 delegates he needs to clinch the nomination. And while Cruz didn't score a single first place victory on Tuesday, Trump came in first everywhere* except for Ohio, where he was edged out by John Kasich.

That win by Kasich in Ohio, oddly enough, is a silver lining for Cruz in an otherwise disappointing night. By taking all of Ohio's 66 delegates, Kasich dealt a blow to Trump's hopes of winning the nomination outright, and as such, made it more likely that Republicans will have a contested convention in July.

That's probably Cruz's best shot at winning the nomination. Given the trajectory of the race so far, it's exceedingly unlikely that he'll be able to reach 1,237 delegates in the remaining primaries and caucuses. To the contrary, he's been quietly laying the groundwork needed to come away victorious in a contested convention scenario. Kasich's win in Ohio increased the odds that he'll be able to put this preparation to good use.

*This is assuming that Trump ultimately emerges victorious in Missouri. As of this writing, he's leading Cruz by a little over 2,000 votes, with 99.9 percent of precincts reporting.