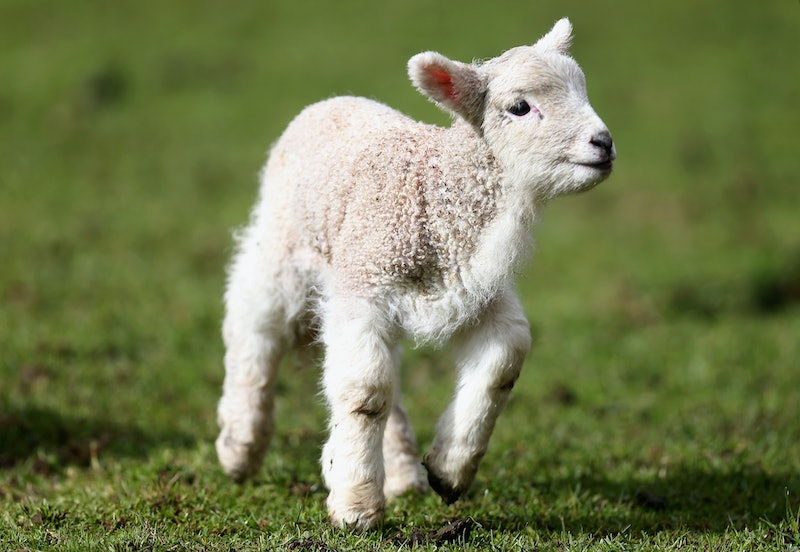 It's nearly spring, which means that if you're anything like me, you're in that awkward in-between-season phase, where you haven't quite switched your closet over to warm-weather clothes, but are getting entirely tired of looking at your sweaters. It's a great time to do some spring cleaning, and to donate or sell the winter clothing you didn't really wear this season. But while you're going through your closet anyway, I'd suggest reconsidering one material in particular: wool. Because while you might love your wool sweaters, the unfortunate fact is, the way wool is produced is cruel to sheep, and it is anything but harmless.

Before I became a vegan, I honestly never really considered wool. I often preferred not to wear it, but that was only because I found it scratchy and uncomfortable, and sometimes even felt allergic to it. Still, many of my sweaters were merino blends, and I didn't think there was anything cruel about that — don't sheep need to be trimmed anyway? It wasn't until I watched the documentary Earthlings that I learned that the way wool is produced is actually incredibly cruel, painful, and often deadly for those adorable little sheep. I was mindlessly wearing suffering, and there is nothing stylish about that.

If you're curious how wool is made, but don't quite feel ready to give away your sweaters, read on for seven reasons why wool should be the first thing to go in your spring cleaning — or at least, why you should think twice before buying any more of it.

Before we talk about their suffering, let's make this clear: sheep are gentle beings who feel pain, fear, and loneliness. Dr. Keith Kendrick and co-researchers at the Babraham Institute in Cambridge discovered that sheep can remember 50 different faces of other sheep and retain this memory for up to two years, which is more than I can usually say for myself.

And the idea that sheep are "dumb" is actually way off: In another study, scientists demonstrated that sheep have well developed spatial memory. The sheep studied were able to navigate their way through a complex maze and actually got better at it with repeated attempts, proving their ability to learn. Sheep are even known to self-medicate with food, just like us; if they feel discomfort, they will often eat a plant that they have learned makes them feel better.

Wild sheep do not need to be sheared. Without human interference, sheep grow just enough wool to protect themselves from temperature extremes, providing them effective insulation against both cold and heat. It's their sweater, and humans are stealing it right off their backs. In history, wool was once obtained by plucking it from sheep during their molting seasons — but breeding for continuous fleece growth began after the invention of shears, which is when the trouble really began. We've bred them to just keep growing wool, but it is anything but "natural".

3. The Shearing Process Is Incredibly Painful

You might think they're roaming a picturesque mountaintop, but in today's market, sheep are actually treated like wool-producing machines. Shearers are usually paid by volume, not by the hour, which encourages them to work as quickly as possible, often without any regard for the welfare of the sheep. Investigators recently recorded shearers who processed up to 27 sheep per hour and up to 35 lambs. The fast and often violent work leads to severe cuts on the sheep's bodies, as large parts of their skin are routinely cut or ripped off so shearers can get their fleece as quickly as possible. Shearers have also been documented lopping off sheep's teats, tails, and ears with shears in their hurry.

When the workers need to close a wound they've created (if they do close it), they often use a needle and thread to sew the wounds shut, without any pain relief. Clearly, shearing is not just Lamb Chop getting a haircut.

4. Lambs Are Especially Harmed In The Process

Babies getting separated from their mothers gets me every time — whether it's the fact the all baby cows are separated from their mothers to produce our dairy, or that lambs are also torn from their mothers so that we can have their wool. According to the Society for the Advancement of Animal Wellbeing, sheep are like most other animals in that the mothers are very affectionate and caring to their young, getting distressed when they can't find them. In the wild, "the lambs will often follow there mothers around where ever they go. Lambs also enjoy climbing and group play and are very curious, just like any other child. Ewes will often foster or adopt lambs that have become lost from there family or flock."

But with wool production, that potentially-happy childhood goes out the window. According to PETA, "within weeks of their birth, lambs’ ears are hole-punched, their tails are chopped off, and the males are castrated without any painkillers. Male lambs are castrated when they are between 2 and 8 weeks old, either by making an incision and cutting their testicles out or with a rubber ring used to cut off blood supply—one of the most painful methods of castration possible. When the lambs’ testicles don’t fall off as expected, shearers often just cut off them with clippers."

When sheep are sheared each spring to produce wool, just before some breeds would naturally shed their winter coats, babies get torn from their mothers to be sheared. Baby lambs' wool is desired, and many sheep die from exposure after premature shearing. When lambs are torn from their mothers' side to be sheared, they cry out before and during the painful procedure in fear.

5. The Brutality Against Sheep Used For Wool Is Well-Documented

A PETA investigation of dozens of sheep farms and shearing sheds across three continents shows the same thing over and over: "Sheep are mutilated, abused, and skinned alive — even for 'responsibly sourced' wool on so-called 'sustainable' farms. Shearers were caught punching, kicking, and stomping on sheep, in addition to hitting them in the face with electric clippers and standing on their heads, necks, and hind limbs. One shearer was seen beating a lamb in the head with a hammer. Another even used a sheep’s body to wipe the sheep’s own urine off the floor. And yet another shearer repeatedly twisted and bent a sheep’s neck, breaking it."

The world’s largest producer of wool is Australia, where the most commonly raised sheep are merinos, who are specifically bred to have wrinkled skin, so they can get more wool per animal. Now, this is gross, but bear with me: the unnatural overload of wool on merino sheep cause their wrinkles to collect urine and moisture. Attracted to the moisture, flies lay eggs in the folds of skin, and the hatched maggots can eat the sheep alive. In order to prevent this condition, some Australian ranchers perform a horrible procedure called “mulesing,” where workers carve huge strips of skin and flesh off the backs of lambs’ legs and the areas around their tails, usually without any painkillers. This is done to produce smooth, scarred skin that won’t harbor fly eggs. Not surprisingly, studies have shown that the procedure causes stress levels for the sheep similar to castration and shearing — I mean, how would you feel about having your skin cut off?

6. The Sheep Don't Actually Get To Stay Alive

If you're a vegetarian but still wear wool, you should know that the sheep used to make your sweater are still ending up on someone's plate. Every year, around three million unwanted sheep are exported from Australia to the Middle East and North Africa — that is, if they survive the grueling journeys on extremely crowded, filthy, disease-ridden ships. According to PETA, "the voyage can last days or even weeks, and many sheep fall ill or starve to death before they even make it to slaughter. The crowding and heat stress can lead to diseases such as conjunctivitis (“pink eye”) and salmonellosis." When the survivors finally arrive at their destination, they are often dragged from the ships and thrown into the backs of trucks and cars, and sent to slaughter.

And those are the sheep that have made it to adulthood. "Every year, hundreds of lambs die before the age of eight weeks from exposure or starvation, and mature sheep die every year from disease, lack of shelter, and neglect. It is considered normal for at least four percent of young lambs to die every spring, and ewes are often killed just to prevent them from passing the infection on to other sheep." Instead of caring better for the sheep that already exist, Ewes are bred to bear more lambs in order to offset the deaths. Left on their own in the wild, sheep would live happily for 15 years.

7. There Are Plenty Of Warm, Cute, Cruelty-Free Alternatives

The good news is, you now have an excuse to go shopping for some new sweaters. There are plenty of vegan "wool" options that are warm to choose from, including bamboo, TENCEL®, hemp, acrylic, polyester, modal, rayon, viscose, and cotton. (I particularly love my Vaute vegan sweater dress, pictured above.)

The only way to be sure we're not buying into cruelty is to leave wool — and all other clothing made from animals — out of our closets. With so many humane fabrics out there to choose from, why wear so much bad karma?