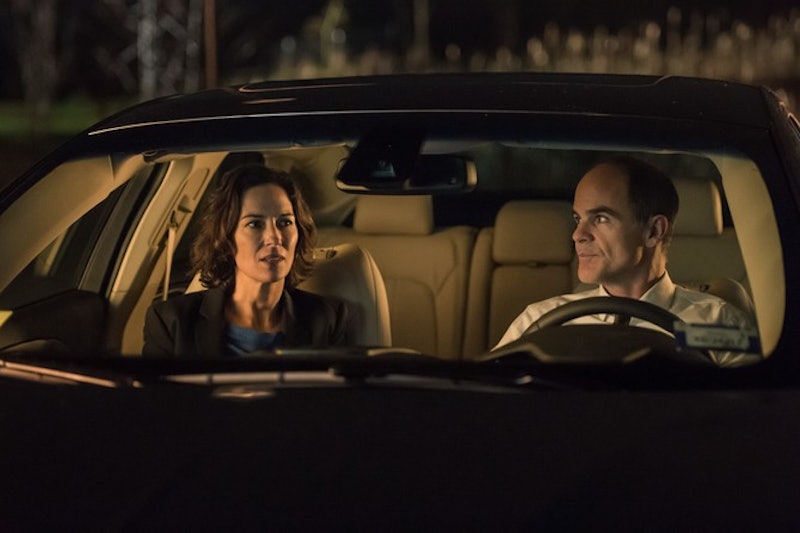 It is beyond safe to say that many of the characters in House of Cards possess moral compasses that skew a bit further south than normal. Though it's quite entertaining to see the (fictional?) dark underbelly of American politics, it's also disquieting to watch some of the moral brutal acts of sabotage unfold. As the right hand man to Frank Underwood, Doug Stamper has the lion's share of ugly secrets, including but not limited to several murders. But, Doug is also a lover, and he tends to get overly attached to the ladies in his life. This season, the unlucky Laura Moretti got caught in Doug's romantic crosshairs, and the finale showed the two of them sitting in a car on a very quiet street. Gulp. But, will Laura Moretti be in Season 5 of House of Cards? I certainly hope so.

If you don't recall who Mrs. Moretti was in Season 4, I don't blame you. The fourth season of House of Cards was absolute madness, and with the inclusion of a new presidential candidate, his British wife, and not one, but two, men named Tom, who could keep track of all of the new characters? Laura Moretti should have been but a blip on the radar, but good old Doug Stamper had other plans for her. [Season 4 episode spoilers ahead.]

After the president was shot by expository journalist Lucas Goodwin, he was in dire need of a kidney transplant — but, Frank's was not the first name on the donor list. The number one spot went to a man named Anthony Moretti, but after Doug bullied the Secretary of Health into bumping the president into first place, Mr. Moretti passed away. Later on, Doug discovered a memorial page set up for the man that Doug was pretty much instrumental in killing, and Doug lingered a bit too long over the photos of Anthony's wife, Laura. Whether prompted by guilt or some creepy preemptive lust, Doug donated $5000 to the mourning family. Anthony Moretti's bemused widow, Laura, left Doug a voicemail to thank him, which he replayed countless times. Stalker Doug was back in action.

The two began a courtship, which featured Doug asking far too many questions about this poor woman's dead husband. The tense season finale intercut scenes of total political mayhem with a glimpse at Doug and Laura having a seemingly normal interaction on a suburban street. Since fans of the show have seen what happens when Doug is alone in cars with women (R.I.P. Rachel), the scene is fraught with a dangerous possibility. However, when nothing terrible happens, it left the door open for so many possible Season 5 scenarios. Will Doug kill her? Will she change him for the better? Actor Wendy Moniz hasn't talked about whether or not she'll be in Season 5, so the questions remain unanswered for now. Still, things definitely seem unresolved with the HoC pair, so it would be odd not to have her in part of the next season, at least.

Whether or not his relationship with Laura will continue, it was interesting to see Doug try to play house with her. Such ambiguity in a character is why viewers love House of Cards, and they are eager to see what will happen between Laura and Doug in the next season. Too bad there's still about a year until we find out. Is it next March yet?