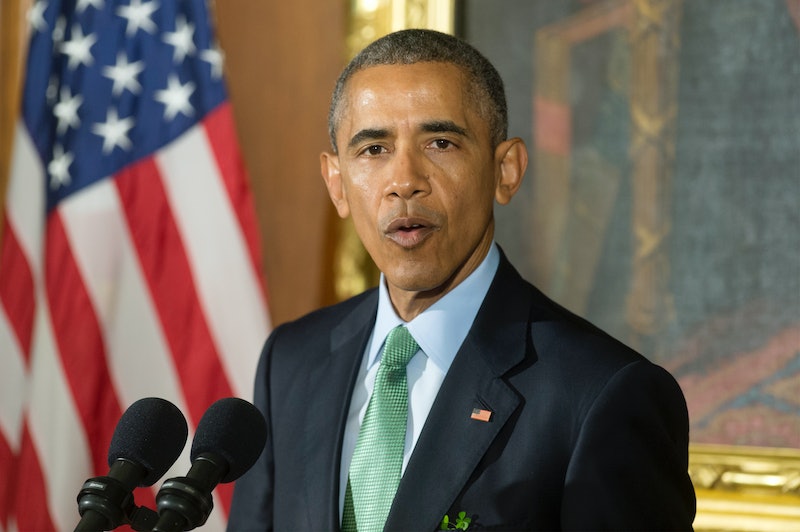 Well, well, well. President Obama has nominated Merrick Garland, an old moderate white man, to be the next Supreme Court justice. Progressives who were hoping for a more progressive selection are undoubtedly disappointed, especially since Obama had the chance to pick someone at least a little bit left-leaning. But the president narrowed his choices to Garland and Sri Srinivasan, another fairly nonpartisan judge — who happened to also be an Indian American who practices Hinduism. When Obama announced that he'd chosen Garland, well, it said a lot.

As Dave Itzkoff summed up on Twitter, Obama more than likely chose Garland because he's the most likely to make it through to the actual confirmation process. "There's no way the GOP could stand in the way of a white, male, moderate nominee, right? Right??" he writes. With the politics involved — like the Senate judiciary committee vowing not to proceed with any Obama nominee — the president likely understood that he had a huge obstacle before him, so he took the safest route that wouldn't make any waves.

Srinivasan is a bit more openly liberal than Garland, though they are both absolutely more centrist than left. Obama could feasibly have gone with either candidate on the premise that they're both talented at considering cases without a partisan view, but he apparently just decided Garland would fit right in with the rest of Supreme Court history.

Garland is by all means qualified for the position. The U.S. Court of Appeals chief justice for the Washington, D.C. district has been working in law for decades, and he has a solid record behind him. In his announcement, Obama called him "one of America's sharpest legal minds — someone that brings to his work a spirit of decency, modesty, integrity, even-handedness, excellency."

But people are clearly disappointed that Obama didn't pick a more "radical" choice — as radical as picking another fairly centrist judge who just has a different skin color and religion can be. The president took the easiest route possible, and Garland will most definitely be at least more progressive than Antonin Scalia, whose seat he could take. But whether the safe choice will make it through the hoops that still lie in front of him remains to be seen.