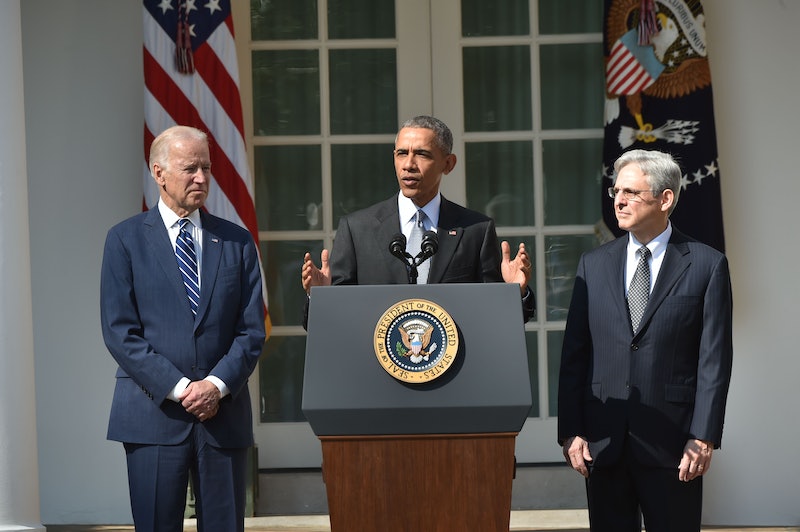 The abrupt death of Justice Antonin Scalia at age 79 created a national debate over who would replace him on the Supreme Court. While Republicans decried the idea of Obama doing his job and nominating a new justice to the Court, the president doubled down on his intention to do just that. And after vetting several possibilities, Obama announced his Supreme Court nominee: Merrick Garland. Of the Supreme Court, Obama declared, "They safeguard our rights. They ensure that ours is a system of laws and not men ... This is not a responsibility that I take lightly."

Obama went on to heap praise on Garland, saying that he was "one of America's sharpest legal minds — someone that brings to his work a spirit of decency, modesty, integrity, even-handedness, excellency ... Today I am nominating Merrick Brian Garland to join the Supreme Court."

Garland is less openly liberal than the main SCOTUS alternative Obama was said to be considering, Sri Srinivasan, making it more difficult for Republicans in the Senate to justify putting up roadblocks against the nomination. Garland, the chief justice for the United States Court of Appeals in Washington D.C., has been described mostly as a moderate, making him a safe bet to move through the Senate judiciary committee. In his speech, Obama described Garland as someone whom both Republicans and Democrats like and respect.

Garland has also been considered for the position before. When Justice David Souter retired from the Supreme Court, Garland's name was bounced around before Obama ultimately selected Sonia Sotomayor.

Known for his conservatism and his "great legal mind," Scalia died Feb. 13 at a ranch in Texas. And almost immediately, politics got involved. The GOP began throwing out the Thurmond Rule, an unwritten and unofficial idea that the president should not appoint a judicial nominee in the last months of his final term. Like many unwritten and unofficial ideas, this "rule" has no set guidelines or timelines, and a fierce argument between Republicans and Democrats began over whether or not Obama could choose Scalia's replacement.

But on Wednesday, Obama went forward with his nomination of Garland. "People respect the way he treats others," he said. "They admire his civic-mindedness ... He grasps the way the law affects the daily reality of people’s lives in a big, complicated democracy."

"I simply ask Republicans in the Senate to give him a fair hearing," Obama implored, describing not doing so as "an abdication of the Senate's constitutional duty."