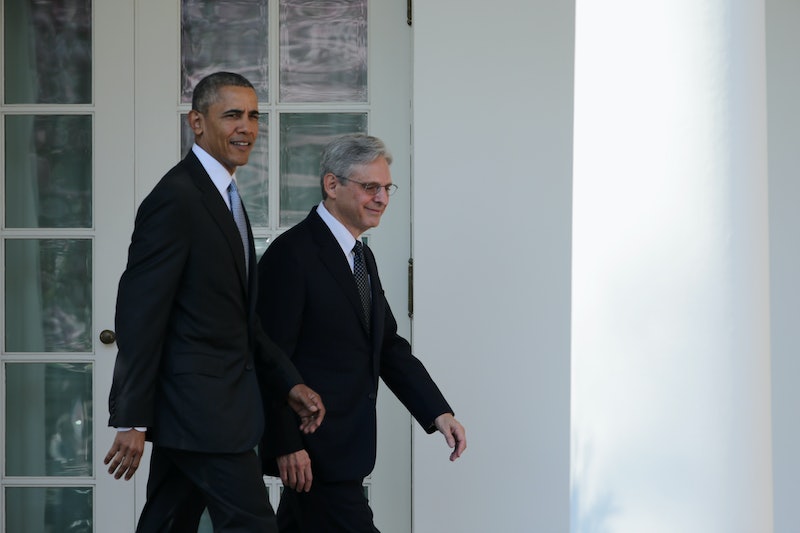 On Wednesday morning, Merrick Garland's life changed as he was nominated by President Obama to be the new Supreme Court justice. His new position will likely affect his immediate family and launch them into a low-key national spotlight, because who can complain? Being the children of a real-life Supreme Court justice would be pretty awesome. Lynn and Merrick Garland have two daughters, Jessica and Rebecca. Upon being appointed by the president in the Rose Garden, Garland mentioned the two girls and joked that the oldest one would be intentionally avoiding cell service right about now.

This is the greatest honor of my life other than Lynn agreeing to marry me 28 years ago ... And the greatest gift, apart from the birth of our daughters.

Heavy.com reports that Jessica is 23 years old and Rebecca is 25. Additionally, both attended Yale. Upon graduating two years apart, their paths separated as Jessica began attending Cambridge for grad school and Rebecca took on a new job. It's safe to say a family reunion will probably be happening soon to celebrate their father's appointment. The family of four calls Bethesda, Maryland, their home.

Jessica, the younger of the two sisters, was one of three Yale students to be interviewed for the famed Truman scholarship in 2014. The scholarship was ultimately awarded to another worthy constant, but that doesn't mean Jessica didn't make a killer academic career for herself while in undergrad. According to her LinkedIn profile, Jessica graduated with a B.A. in Ethics, Politics, and Economic from Yale in 2015. In between semesters it seems, she interned with the Vera Institute of Justice in the summer of 2013, hinting she may pursue a law degree in the future.

As co-president of the Yale Undergraduate Prison Project, Jessica advocated for juvenile justice and sentence reform. In a testimony, she and activism chair Aria Thaker emphasized the fact that juveniles can receive life sentences without the possibility of parole in Connecticut. In March 2014, she was interviewed in a Yale Daily News video and spoke about her involvement in the project.

The two daughters have not just one, but two amazing parents to look up to as role models. Jessica and Rebecca's mother, Lynn, attended Harvard University and MIT and was a successful defense electronics contractor. Now, they'll certainly be hearing some fun stories about the drama you know goes down among the Supreme Court justices.