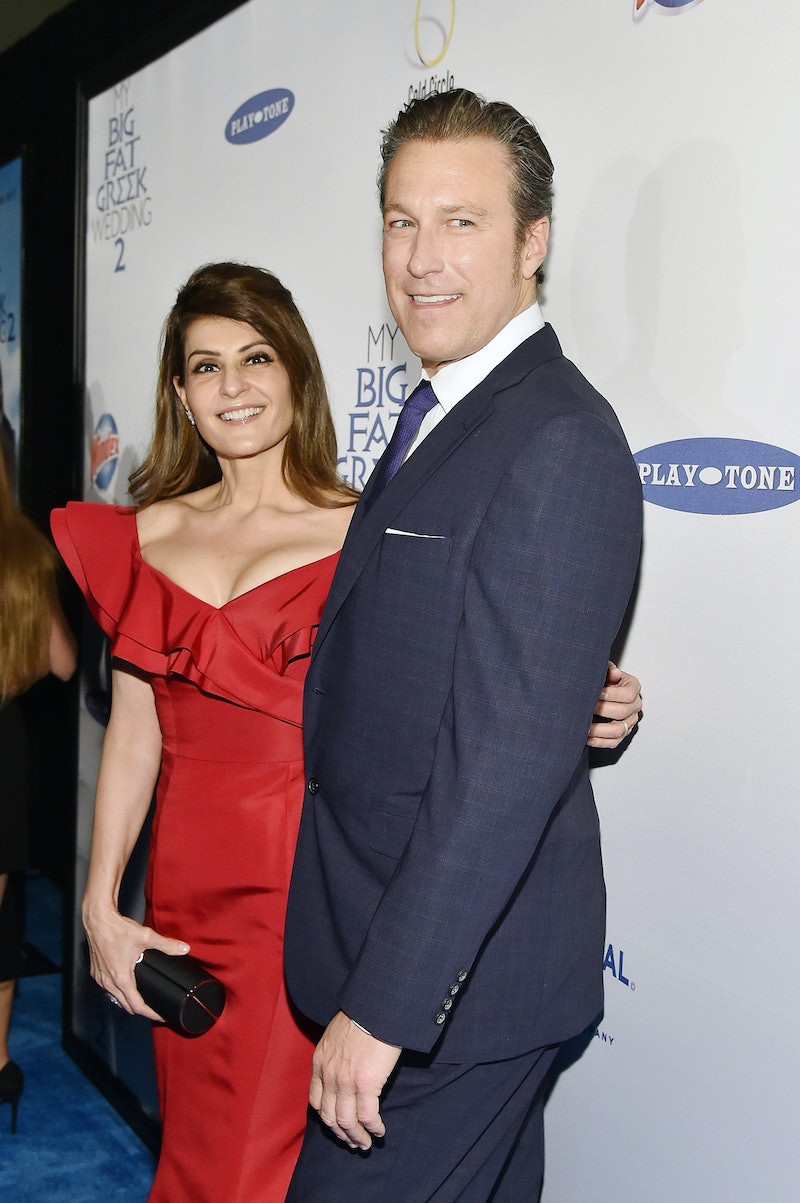 For the record, John Corbett agrees with you: Sex And The City was once "the greatest show on TV." And Corbett was once one of the series' biggest heartthrobs, thanks to a role as Aidan, Carrie's sexy, salt-of-the-earth crush on the HBO comedy. Reminiscing over the series with Bustle, the actor says that Aidan "was pretty goddamn grounded," an uncomplicated guy who just wanted to hang out with his lady and his dog — in other words, the anti-Big. And today, even he realizes how iconic his character, and the show, truly were.

"I’m a part of something that’s really a pop-culture phenomenon," Corbett remembers reminding himself during his time on SATC. "And then I’d go out on the streets and go into restaurants, and people would let me know that. I’m Aidan. I’m Aidan from Sex And The City. There were certain bars I couldn’t even go into."

But not to worry, SATC fans — Corbett doesn't let his spoiled Saturday nights mar his memory of the show. I ask the actor if he feels that the series (which ended in 2004) gets the respect it should for being groundbreaking, paving the way for more female-driven comedies, and he takes the opportunity to sing the praises of the ensemble (Sarah Jessica Parker, Kristin Davis, Cynthia Nixon, and Kim Cattrall) as well as the creative team. "I think those girls worked so hard, and I think they ultimately know that they didn’t get the sort of critical acclaim that they deserved," Corbett says. "There’s that old saying, ‘The first one through the door gets the bloodiest.' They make it easy for everybody else."

These days, Corbett is still playing Aidan-like roles, including the part of Ian Miller in Mar. 25's My Big Fat Greek Wedding 2. The long-awaited sequel to the 2002 film features the return of Toula Portokalos's non-Greek life-mate, as well as the rest of her extended family and friends, and fans will be glad to know that Ian is just as dreamy as he was in the 2002 original. Fortunately, Corbett has come to terms with his heartthrob status — well, mostly.

"They f***ing put a fan on me," he says, laughing about Ian's romance-novel intro in the Greek Wedding revival. "Like a Fabio commercial."

Fans aside, the follow-up to surprise hit My Big Fat Greek Wedding catches up with Toula (Nia Vardalos, who also wrote both films) and Ian on a low romantic ebb in their relationship, which began when Ian walked into Dancing Zorba's for baklava and walked out with Toula's heart. In the sequel, the magic isn't gone, per se — just hiding under layers of needy parents, a perpetually embarrassed teenage daughter, and the unfortunate (but luckily, brief) return of Toula's grandma glasses.

“[Nia and I] have both been around a ton of those kind of people, who just sort of take each other for granted," Corbett says."I think it’s just that kind of universal thing that happens in long-term relationships that [Nia's] hitting on." The original film is beloved by fans in part because they saw their families reflected in the smothering and loving Portokalos clan. Will the same be true of 2016 audiences and the sequel's mid-life marriage crisis storyline? Perhaps; Corbett is relieved Vardalos didn't go with the less hopeful alternative to Ian and Toula getting their groove back. "The easy way to go, I think, would have been "My Big Fat Greek Divorce," he jokes.

Thankfully, fans won't have to experience that kind of sadness; heartbreak is more Aidan's area, anyway.

More like this
Everything To Know About 'My Big Fat Greek Wedding 3'
By Grace Wehniainen
Kimberly J. Brown & Daniel Kountz Looked Back On Their ‘Halloweentown’ Romance
By Stephanie Topacio Long
All The Sneaky Lindsay Lohan Movie Easter Eggs In Her New Ad, Explained
By Stephanie Topacio Long
Jesse Tyler Ferguson Had A Funny Run-In With A Fellow ‘Modern Family’ Alum
By Grace Wehniainen
Get Even More From Bustle — Sign Up For The Newsletter