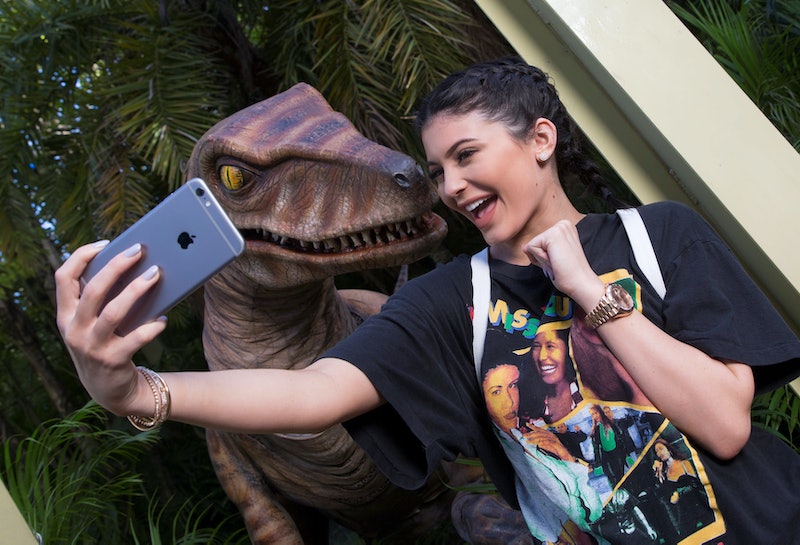 There is no family that owns social media with their collective followers more than the Kardashian-Jenners. Recently, Kim Kardashian finally made a massive step in her social media domination and announced that she would join Snapchat. The app has become a medium for celebs to really take control of what they want to share with the public and their fans, and Kim's baby sis, Kylie Jenner, has taken full advantage of that. Aside from being an Instagram queen, Kylie is ruling Snapchat, so, if you want to follow her and stay in the loop, you'll need to know Kylie Jenner's Snapchat name first.

Unlike her sister's straightforward Snapchat name of "KimKardashian," Kylie went the way of Justin Bieber's Snapchat and chose something a little more difficult to find: KylizzleMyNizzl. At first I thought maybe "KylieJenner" was already taken, but then I remembered that Kylie is just a normal 18-year-old girl and no one can really explain why they do the things they do. (Fine, I'll end my old lady rant.)

Kylie's choice of Snapchat name didn't come without any criticism, though, considering "nizzl" is slang for the n-word. Kylie has already dealt with outrage over what some claim has been an appropriation of black culture over the years, but it seems like the instance of her controversial Snapchat name was largely overlooked. Bustle has reached out to Kylie's rep for comment, but has not yet received a response.

But regardless of the name she chose, the youngest Jenner is one of the most watched people on Snapchat, so here are some moments you can expect Kylie to share with you, and the world, if you follow her.

They are full of drama and intrigue!

Hilarious Face Swaps With Her Sisters

Is Kim saying Kylie looks good with her face a compliment or shade? The world may never know...

Moments With Her Boo, Tyga

Behind-The-Scenes Looks At Her Business Ventures

You might not be able to own Kylie's Lip Kit , but you can dream.

Plenty Of Videos Of Herself & Her Friends

If you don't put it on Snapchat, did it really happen?

Cute Moments With Her Puppies

Hey, sometimes it's fun to live vicariously through famous people's lives and Kylie Jenner has a pretty sweet one.

More like this
Kylie Jenner Shares A New Photo Of Her Son With Travis Scott For Father's Day
By Jake Viswanath
EJ Marcus Runs The Most Wholesome Corner Of TikTok
By Alexis Morillo
Will Beyoncé Be At The BET Awards To Perform “Break My Soul” Or Attend The Show?
By Jake Viswanath
Prince William & Lorraine Kelly Lead Tributes To “Truly Remarkable” Dame Deborah James
By Sam Ramsden
Get Even More From Bustle — Sign Up For The Newsletter