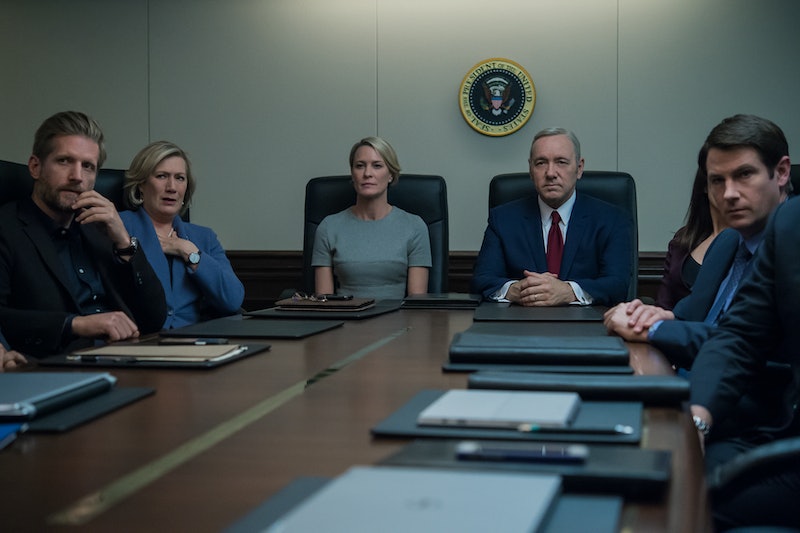 There is no lack of danger in House of Cards. Indeed, the show has taken American politics — a topic that can be decidedly unsexy, if anyone who has ever seen CSPAN can attest — and turned the volume far past 11. The show is shaped around the question of whether or not we can truly ever trust the people who we elect to govern us, and so far the answer is "probs not," for the fictional government, at least. Though the series featured an exterior threat to national security in the form of terrorism, Season 4 also featured one of the most horrifying mechanisms that the electorate uses to stay in power. But, what makes Pollyhop so dangerous on House of Cards that even Frank Underwood is worried about it?

Pollyhop is a search engine that, in HoC's world, evidently is "better than Google," and though it sounds like its some sort of bunny dance hall, its actually a powerful plot device in the fourth season of House of Cards. The new kid on the block in the presidential race, Will Conway, is winning the polls, and Frank wants to know why. With some helpful digging by a data scientist, it is discovered that Conway's key to success isn't derived from selfies alone: Conway has been using data recovered from Pollyhop to more keenly target voters. The information supplied by Pollyhop allows Conway's team to better glean who his voters are via the kind of searching they are doing and where they are located. When Conway can get a better picture of what the people in America are searching for in a candidate, it is easier to manipulate their votes.

While this sort of data mining is not illegal, it is an ethical gray area, since it's a method of reverse-engineering public approval. It's a perfect method for garnering more votes for Conway, and it is also a great way to create an award-winning series.

That's right. According to a 2013 New York Times article, Netflix utilized data from their millions of subscribers to fine-tune a hit based on customers' viewing preferences. The creators knew that audiences streamed David Fincher and Kevin Spacey films on the reg, so any content including the two of them was sure to be something viewers would like. Jonathan Friedland, the company’s chief communications officer talked to the NYT about how specifically the company uses data to their advantage.

Because we have a direct relationship with consumers, we know what people like to watch and that helps us understand how big the interest is going to be for a given show. It gave us some confidence that we could find an audience for a show like House of Cards.

However, it's worth noting that using what your audience likes to watch to create awesome new shows is pretty different than using search data to further your political aspirations like Conway does with Pollyhop. Although, if Netflix's CCO wants to run for president, I'm not necessarily complaining. Netflix & Chill becoming Netflix & Capitol Hill would be pretty awesome.