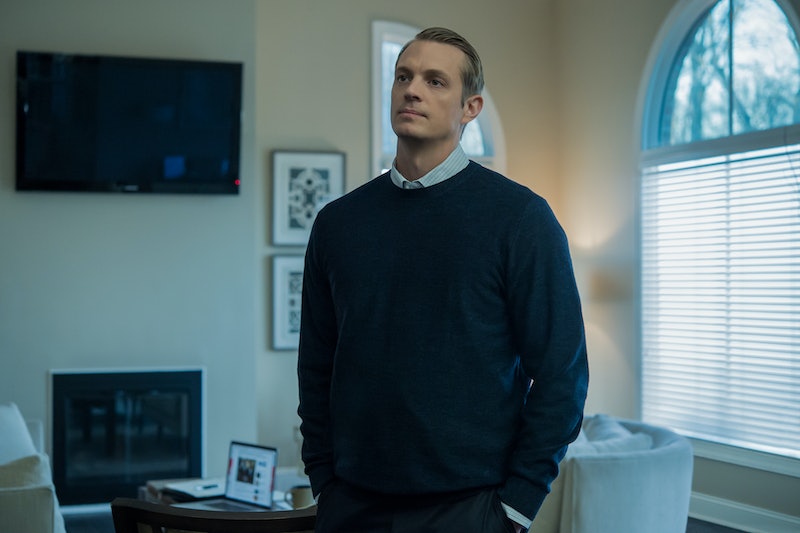 Frank Underwood finally seems to have a true adversary in Republican presidential nominee Will Conway. While Underwood seemed to charm his way into office with his slick accent and quick wit, Conway has charmed his way to the top using his good looks and adorable family life. House of Cards Season 4, Episode 1-6 spoilers ahead. However, Conway has a lot more than that up his sleeve: The search engine Pollyhop on House of Cards . Conway's connection to Pollyhop is so intimidating to the Underwood campaign that Frank flirts with the idea of trying to tap the NSA to combat Conway's connections. So, what exactly is Pollyhop, and why is it so terrifying?

During Frank and Conway's first one-on-one meeting, we learn that "Ben Grant owns Pollyhop. And [Conway] own[s] Ben Grant." Conway's association with Ben Grant and Pollyhop gives Conway access to users' search information, which allows him to campaign directly to Pollyhop users based on their specific search habits and any other information that Pollyhop may have collected.

A real-life equivalent would be if a presidential candidate teamed up with a popular real search engine and was using people's search habits to alter their own platform, allowing themselves to appeal to what they know to be the most popular ideals for that user. This effectively turns the candidate into whatever version the user is most likely to want to elect. It's an incredibly powerful tool for someone running for office to already know what the people want them to say — and that's just the surface level of Pollyhop.

The implications of a presidential hopeful having deep connections to a search engine service are far-reaching and terrifying. One HoC character refers to a similar attempt to get a handle on the population through data mining as "brainwashing." While it makes for a scary reality, Conway's connection to Pollyhop also makes for a fascinating anti-Underwood figure in House of Cards. The well of power and information that Conway has access to is unparalleled compared to anyone else that Frank has gone up against in the past.