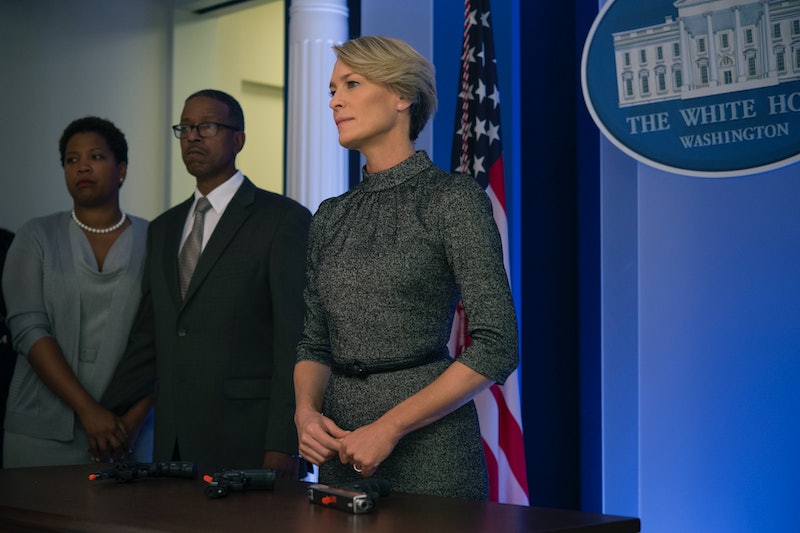 Television shows are made very deliberately, there is never a wasted moment or a shot that isn't supposed to be in the final edit. However, it would be easy to think that Danny's suicide in House of Cards was some kind of editing mistake. Out of nowhere, viewers saw the suicide of a teenager who the audience has never met before, and it's this teenager's liver that is used to save the dying president. The showrunners could've had a liver from any other person save the president, but instead they decided to show the suicide of a young boy — Why? Well, Danny's suicide plays into the gun control debate both on the show and in real life.

In the seventh episode of Season 4, Claire Underwood is seen giving a press conference and showing three different guns that killed three different people, the last of them being deceased Secret Service member Edward Meechum. Not mentioned among them, was the young boy who we saw kill himself just an episode prior. Claire makes it her mission as First Lady to begin pushing legislation preventing the illegal purchase of firearms, however, Danny's suicide was performed with a legally obtained gun from his own house, making his scene stand out even more from the uniformity of Claire's message.

Danny's suicide is a seemingly out-of-place device that actually carries a great deal of weight to it. One could simply view it as a random tragedy. But, it's not random at all. According to a 2013 Center for Disease Control and Prevention study, 17 percent of high school students "seriously considered attempting suicide in the previous 12 months," and "males take their own lives at nearly four times the rate of females and represent 77.9 percent of all suicides." With statistics like those playing out in real life, Danny suicide is in HoC wouldn't have been that uncommon, but could have sparked an important debate on mental health, particularly in youth. However, on the show, there wasn't a mental health lobby pouring money into politics. It was much easier for Claire to go after the illegally-purchased guns used to kill other people, than focus on the boy who saved her husband by taking his own life.

It's unclear what Danny's reasoning for suicide was, or if Danny had any message for the world — he didn't seem to have any clue that his liver would end up in the president. But, now, the president operates with part of him literally comprised of something from a dead teenage boy. Yet another possible metaphor for all the parts of himself — his power, his success — that he's gained from bodies buried and lives ruined.

Danny's role in the gun control debate, although not explicitly stated apart from a quick conversation by pundits, is an important one — the fact that children are killing themselves with firearms, legal or not, is a huge issue. By House of Cards showing us the awful act that Danny commits — the bloody image of his death committed to the memory of the viewer — instead of merely having a liver show up out of nowhere reminds the viewers, on a visceral level, the price of Frank's presidency, while also forcing us to confront the issue of teen suicide in our own, very real, world.

More like this
Where Is Oscar Torres In 'Only Murders In The Building' Season 2?
By El Hunt
The “Beatrice Six” Were Awarded $28 Million After Their Wrongful Convictions
By Brad Witter
It Took Investigators 23 Years To Correctly Identify Helen Wilson's Real Killer
By Brad Witter
6 Mind-Blowing Fan Theories About How Stranger Things Will End
By Kadin Burnett
Get Even More From Bustle — Sign Up For The Newsletter