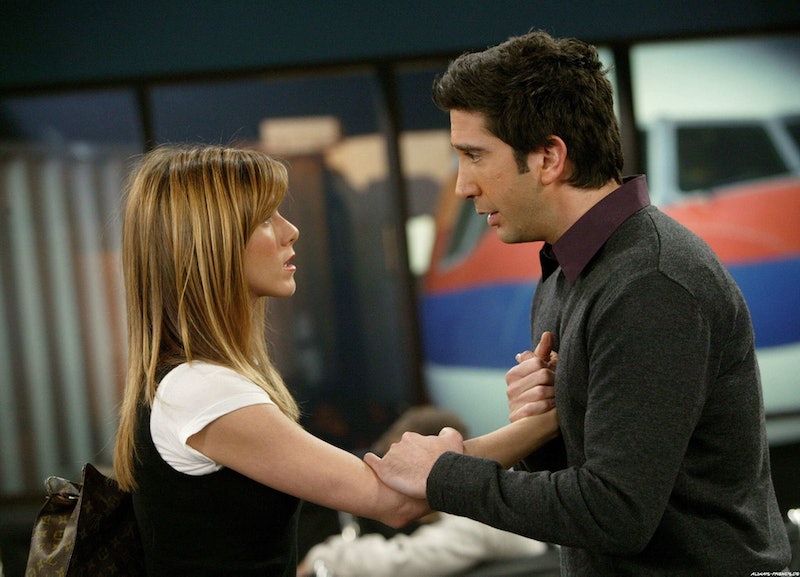 Dating is forever evolving, so it's no surprise that budding relationships today differ drastically from young love when we were coming of age. And while what we fondly remember through rose-colored glasses might now elicit an eyeroll for, including romantic gestures that are so '90s (ermehgerd), most of us who actually dated in the '90s would argue it was a pretty adorable — albeit now totes outdated — time to be young and in love.

For those being raised in the digital age of romance, whereby swiping right constitutes an earnest expression of interest, dating in the '90s probably seems like a total dinosaur. We spent hours talking on the phone and communicating without the assistance of text shorthand or even emojis. We didn't Google our dates to get to know them; we asked them questions. IRL. We made the kind of grandiose gestures that at the time seemed like the stuff dreams were made of... but would now very likely land us some super strange side-eye. More on that a bit further down.

So, yeah, romantic gestures in the '90s were just as over-the-top and idiosyncratic as everything else about the decade — and, c'mon, who doesn't love some good ol' '90s nostalgia? Clearly, the decade had its merits, and dating was definitely one of them. Here are few of the classic ways we showed our significant others we loved them 4 lyfe.

1. Updating Your Away Message

We didn't have the luxury of updating our Facebook status to "in a relationship." So when you were happily coupled up, there was but one thing to do to alert the interwebz to your besotted status — tweak your MSN Messenger or AIM profile from a cryptic quote or song lyric to something seriously OTT and highly likely involving old-fashioned heart emojis (<3, holla) with your bf or gf's initials.

OK, so in hindsight this was a little hammy. But, hey, we didn't have Instas to post endless usies — the plural version of a selfie, natch — or apps that automatically stitched together photographic proof of our coupled up cuteness. Rather, we literally had pictures printed up and then painstakingly clipped them out to create collages for everything from the inside of our lockers to the covers of our textbooks. We even made entire scrapbooks this way devoted to the objects of our affection, which I'm currently feeling a bit cringe-y just thinking about it.

They say actions speak louder than words and, in the '90s, the action that did all the talking involved other people's words — as in, we let the music whisper the sweet nothings for us. After all, how could someone possibly relay the depth of their love for you if not by downloading music through Napster and working until the wee hours on a custom compilation including heart-tugging love ballads like "Iris" by the Goo Goo Dolls?

Thanks to popular scenes in '90s media — think Jim Carrey's character chasing down the plane in Liar, Liar — air travel provided endless opportunities in the '90s to make dramatic declarations of love. Whether it was sitting in the concourse crying as your bf/gf flew off or literally pulling a Ross and demanding, "Let her off the plane!," we made terribly suspect decisions at airports in the name of love. To be certain, these stunts would get you straight-up detained today.

Clearly, music was a very personal and important part of dating in the '90s. Proof past the whole mix CD thing? The fact that we'd spend hours upon hours picking the perfect song to dedicate to our significant other, even more hours trying to actually get someone at the radio station to pick up our calls, and finally more hours on top of that waiting to hear the dedication played. Of course, if your bf/gf managed to miss it, the entire time-sucking cycle must begin again. Love makes you do crazy things.

6. Loaning Out Your Letter Jacket

If your boyfriend actually gave your his letter jacket to roam the hallowed halls of your school in, you couldn't help but feel special. Of course, looking back, this seems a bit like a symbol of ownership. Regardless, between scoring your bf's letter jacket or being asked to wear his class ring (which you had to wrap scotch tape around 30 times to make it fit), you were basically, like, high school married.

It's not like we were all rolling in the dough back in the days. My boyfriend worked as a part-time shelf stocker at the local grocery store — which was shaped like a barn; thank you very much, small town life — so suffice it to say his disposable income wasn't super disposable, if you catch my drift. Which is perhaps why him treating me to mall dates seemed totally swoon-worthy. We'd cruise through Structure for him, sure, but then he'd treat me to a top or two at Express, some Pear Glace lotion at Bath and Body Works and one of those obnoxiously large cookies at the food court.

Today, dating involves lots and lots of texting. Instant messaging is the modern equivalent of what we considered the cultural milieu of romantic exchange: love letters. There was something so sweet about being passed a note with your bf/gf's handwriting, even if it essentially just asked if you wanted to hang at the football game on Friday night. Why don't people still do this? It deserves a comeback, eh?

While I fully realize Say Anything was actually released in the '80s, this totally still counts as a hallmark romantic gesture of the '90s. I mean, the movie hit cinemas in 1989, after all — '90s kids had the entire decade to rip off Lloyd Dobler's iconic boombox-over-the-head-streaming-peter-gabriel move. Suffice it to say, we did some super cute shit back in the day, y'all.