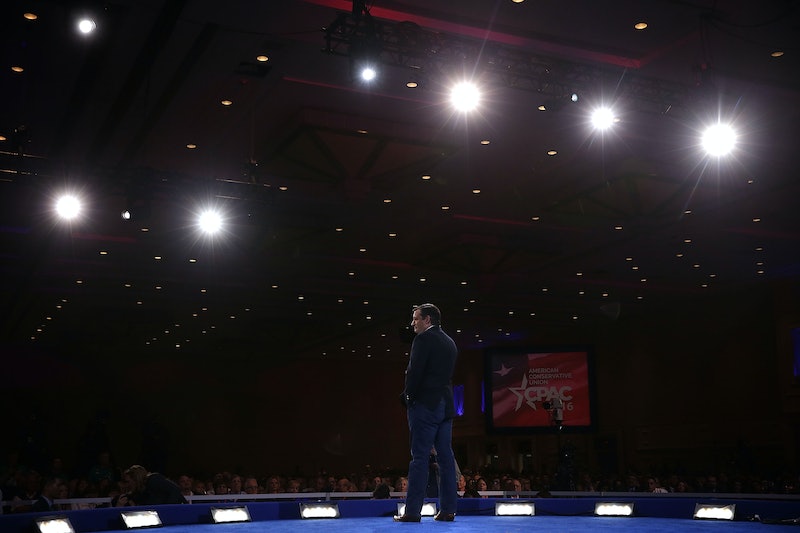 Recently, there’s been a rumor swirling that none of the Republican delegates are actually bound to vote for one candidate or another. This would mean that the delegates — as in, every single last one of them — can vote to nominate whomever the hell they please at the Republican convention in July, which in turn would mean that all of these primaries and caucuses have been meaningless beauty contests. Is that true? Can GOP delegates vote for whomever they want at the convention?

The theory was floated by Curly Haugland, an otherwise obscure Republican official from North Dakota. Haugland, a member of the RNC Rules Committee, wrote an open letter last week suggesting that according to the Republican National Committee’s 2016 delegate rules — which you can read here — none of the delegates will actually be bound to any candidate when the convention begins. On Wednesday, he made essentially the same claim in an interview with CNBC.

Haugland’s reasoning depends on the intricacies of the RNC’s byzantine delegate rulebook, but his argument essentially boils down to two assertions: The RNC’s rules are internally contradictory, and thus can’t be followed, and the RNC can suspend all of the rules at its own will at the beginning of the convention. Let’s take these two assertions separately.

There’s an argument to be made that some of the RNC’s rules contradict each other. For example Rule 16(a)(1) states that state primaries and caucuses “must be used to allocate and bind the state’s delegation to the national convention in either a proportional or winner-take-all manner.” This suggests that the winner-take-all system is an appropriate means of allocating delegates. Rule 38, however, appears to prohibit winner-take-all allocation:

No delegate or alternate delegate shall be bound by any attempt of any state or Congressional district to impose the unit rule. A “unit rule” prohibited by this section means a rule or law under which a delegation at the national convention casts its entire vote as a unit as determined by a majority vote of the delegation.

There’s another contradiction that’s much more glaring than this. It can be found in Rule 16(d)(2):

Only persons eligible to vote who are deemed as a matter of public record to be Republicans pursuant to state law or, if voters are not enrolled by party, by Republican Party rules of a state, shall participate in any primary election held for the purpose of electing delegates or alternate delegates to the national convention…

In other words, states that hold open primaries — that is, primaries in which Democrats and Republicans are both allowed to vote — don’t get to send their delegates to the national convention. But 19 states in the GOP do hold (or have already held) open primaries, including California, Ohio, Michigan, and Illinois. If this rule were actually applied, the delegates from those states would be banned from participating in the convention, rendering the primaries in those states meaningless.

However, all of this may be beside the point, because according to Haugland, all of the RNC’s delegate rules can be completely discarded at the beginning of the convention anyway. There are a couple of reasons why this might be so. First, there’s this preamble in the RNC’s rulebook:

BE IT FURTHER RESOLVED, That the following be and hereby are adopted as The Rules of the Republican Party, composed of the rules for the election and government of the Republican National Committee until the next national convention…

Because these rules were technically adopted before the 2016 convention, the phrase “until the next national convention” could be interpreted to mean that the rules cease to apply once this convention begins. I know, that sounds incredibly pedantic, but from a grammatical standpoint, that is what the preamble says.

Moreover, Haugland points out that the RNC is a private corporation, and its internal operations are not governed or limited by any laws. And it doesn’t have a Constitution, either. The only ones who have a say over the RNC’s rules, in other words, are members of the RNC. If they wanted to vote to change the rules — including the delegate rules — at the beginning of the convention, nothing would stop them.

But just because the RNC is technically able to change the rules doesn’t mean they actually would. And this, really, is the crux of the issue: Would the RNC really take such a drastic measure? The only reason anybody is talking about this possibility is because there’s widespread opposition to Donald Trump, the delegate front-runner, within the GOP itself. But is it really possible that the committee would simply suspend all of its rules in order to strip the nomination from the candidate who won the most votes?

Haugland thinks so. But others, including longtime RNC member Morton Blackwell as well as Richard E. Berg-Andersson of the delegate-centric site TheGreenPapers.com, disagree. Neither of them argues that the RNC lacks the ability to change these rules; rather, they say that the RNC simply wouldn’t take such drastic measures, as it would essentially be a slap in the face to Republican voters across the country.

“I think it’s highly unlikely that anything relating to the binding of delegations or binding delegates is going to be altered,” Blackwell told The Daily Caller.

It isn’t quite accurate to say that the delegates aren’t bound to vote for any candidate, because currently, they are. However, the RNC could throw out its own rules and, in essence, “un-bind” these delegates.” Whether it chooses to do so, however, is another matter entirely.