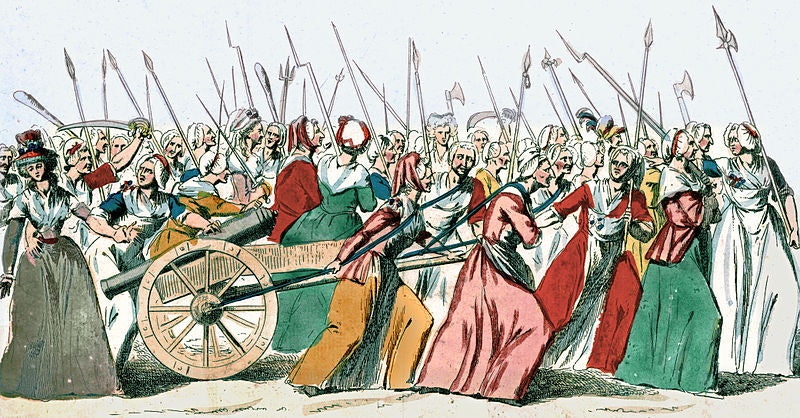 March is many things — a month when we set back our clocks, a month when we celebrate the return of spring, a month when we consistently find ourselves over or under dressed for the weather, no matter what the actual temperature is — but it is also Women’s History Month! This is the month where we revel in learning about all manner of female history-makers, from the big names to the unsung heroes. It's also a time when we focus on learning more about the female perspective on big movements in human history.

If you’re all about egalitarianism, though, you might be wondering why one gender needs a particular month devoted to its contributions to and arguments about history. And the answer’s actually pretty simple: It’s because, when it comes to history, the story of women is largely one of exclusion, silence, absence and bias, and we need a month (at minimum) to redress the balance. Women have made a lot of history, but sometimes, looking at the history books, you wouldn’t exactly know it.

We’re doing far better than we once did. Campaigns to recognize female movers and shakers from history are becoming more common; for instance, the pioneering 19th century mathematician Mary Somerville will be featured on the new Scottish £10 note. But the need for us to make an extra effort to learn about women who have played important roles in history continues. For International Women’s Day, IFLoveScience, one of the most feminist science sites on the internet, ran an entire series about #WomenYouShouldHaveHeardOf, featuring an entire line-up of female STEM luminaries that aren’t household names — a great example of how much we all still have to learn. For every influential woman in history you can name, there are many more you, as a woman in history yourself, deserve to know about.

With all of that in mind, here are five reasons why Women’s History Month needs to exist — not least of all because it can inspire us to get out there and make our own bit of history.

1. There Are So Many Unacknowledged Women Who Made History

Recently, a female scientist made headlines with her innovative response to online sexist trolling: for every misogynist communication she received, she and her team would create a Wikipedia page for a female scientist who didn't have her one yet. This got a lot of attention for being awesome, but it also stuck out for the fact that nobody else is writing these articles. Women are constantly discredited, overlooked, and, in some awful cases, cheated out of their real deserving place in history. (STEM in particular is filled with stories of women whose innovations were co-opted by their male compatriots, who then got all the fame and glory. Jocelyn Bell Burnell or Rosalind Franklin, anybody?)

A lot of the stuff I write at Bustle is about awarding recognition where it’s due to awesome women in history. As a historian, I basically have an endless supply of awesome women whose achievements are not well-known to write about — which is great for my job but really bad for my soul. Being a household name was often not the aim of the women who changed the world, but it’s definitely unfair to see them denied the credit they deserve. Legacy matters, guys. For every Marie Curie and Sally Ride, there are thousands of women who deserve to be part of the historical narrative, mentioned in the same breath (or even the one before) as male movers and shakers.

The importance of Women’s History Month is also about lack and absence. Women are severely outnumbered in many Western histories of “important” things like wars and royalty shifts and religious arguments. Why? Because history was written, overwhelmingly, by dudes, and women were largely left out of the discussion — except when they were phenomenally powerful and influential, in which case they were often seen as exceptions (hi, Eleanor of Aquitaine and Empress Cixi). “Real, capital-H History” was often seen as non-domestic and huge in scale, not intimate or home-based (i.e. women’s territory). We see it differently nowadays, but historically, what’s been written about the past usually wrote women out.

We’ve also been denied the opportunity to create big-H history, simply because we’ve been given far less access to power. Women in human civilizations throughout history have been, with a few varied exceptions, denied access to education, voting rights, the ability to stand for election, make their own contraceptive decisions, own property or control businesses. Is it any wonder they haven’t usually been the force making the decision about whether to invade Russia?

This isn’t to say there haven’t been woman-positive environments in history, or hugely influential female historical figures who fought atmospheres of huge oppression to achieve great Historical things (Ida B Wells, take a bow). But in the overall picture, women are largely left out — and that matters.

Know a woman’s name. Know her history. Know what she did, how she did it, and why she did it. That kind of intellectual legacy is immensely powerful and seriously feminist, because it makes her more than just her gender, or a side note in a male collection of Great Ideas. Shining a light on women’s contributions to the annals of human history (and, crucially, that includes both women who did amazing things and women who did e xtremely awful things ) makes us equal humans, equally worthy of being remembered for our deeds.

Women’s History Month is also about viewing societal shifts through the lens of women’s perspectives: what did events like World War I, the Spanish invasion of South America or the war between China and Japan mean for women? How did they contribute to it and react to it? Viewing events in this way is hugely feminist, because it makes them equal actors in the flow of time and events, with a valid way of looking at things. Even if the evidence is piecemeal (as it often is) and overlaps with many other things, the female voice and eye need to be a part of how we view human existence in the past. It makes them real.

4. It Busts Myths About What Women "Can't" Do

The thing about history is that it’s also a series of precedents. And knowing all about that can come in useful if you’re dealing with any misogynist bullsh*t about women “not being able” to do certain things. Did someone tell you that women can’t code? Tell that to Margaret Hamilton, who wrote the code to send Apollo into space. By hand. Women can’t do mathematics? OK, we’ll just run that by Emmy Noether and Hypatia. Women can’t write serious or influential literature? Sappho, Murasaki Shikibu, Christine de Pizan and many others beg to bloody differ. Women can’t govern? It seems Cleopatra, Queen Theodora and Empress Wu Zetian managed all right. Women can’t be good doctors? Yep, Elizabeth Blackwell absolutely believes that. Women can’t lead military forces? Joan of Arc, Bouddica and Lady Fu Hao would like a word with you.

Many of these women are not saints or uncomplicated figures, but neither were men doing similar things in similar eras. They’re human. Context gives us power; if the myth has been busted before, it can be busted again and again.

5. History Is Inspirational To Future Generations

The people we idolize as children, young adults and slightly-less-young adults matter. The knowledge that something is possible is an incredible boost, and knowing that a woman could win two Nobel Prizes (Marie Curie — her daughter also won one, just to keep it in the family), essentially invent computing (Ada Lovelace), be a Supreme Court judge (aw yes, RBG), save hundreds of people on the Underground Railroad (Harriet Tubman), write the foremost impressionist novels of the century (Virginia Woolf) or perhaps just discover the operations of genetics (Barbara McClintock) emphasizes that other girls can do that, too. Being a vocal, important part of history is one of the ways in which women of the past change us: leading by example.

And it shouldn’t just be about recent history, either. The fact that women have always been awesome, always been chipping away at the edifices that surround them and trying to make something great, is an important thing to emphasize for every generation of women. Powerful ladies weren’t invented by suffragettes or suddenly born when the Pill turned up. They’ve always been there, influencing human civilizations and the rise and fall of nations. Modernity hasn’t made women great; women made women great. I want girls and women to know that — to have have the names of complicated, fully-realized, centuries-old women on the tips of their tongues. Women’s History Month matters because women’s history needs to matter to us.