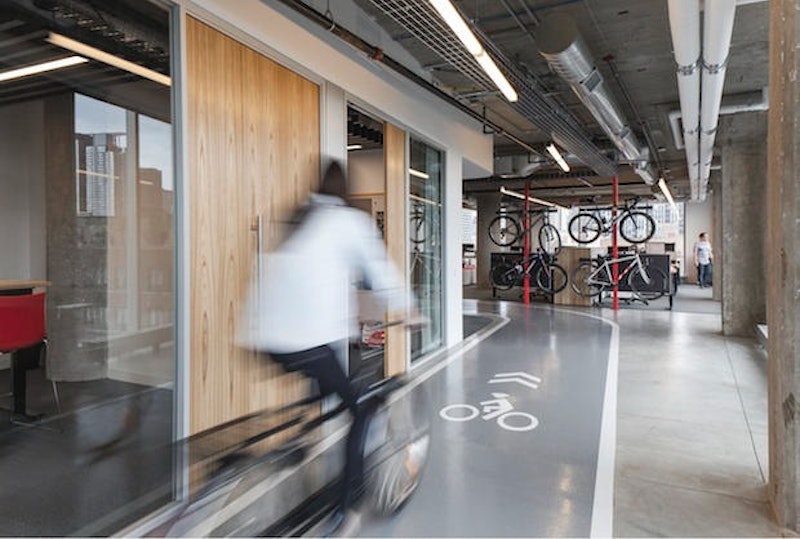 The idea of having healthy, happy offices is not new — between napping pods, yoga classes, free lunches, and extra time off when necessary, we're beginning to recognize that to thrive as a society, we must thrive as individuals. That's why the creation of this new office with bike lanes is both unsurprising yet completely, totally cool.

For employees over at SRAM, the Chicago-based bike parts manufacturer, cycling is more than a hobby or a fun thing to do on vacation: it's a primary mode of transportation, one that needs to be implemented more frequently for the sake of our environment and health. In an effort to create a company culture that more completely reflects their values, they hired design firm Perkins+Will to create a space that ensures their 72,000-square-foot office is equipped with bike lanes, workspace bike racks, tire-filling areas, bike washing stations and a full locker room with showers.

"SRAM believes in the power of bicycles to transform lives, and in their new office, we wanted to design a space that helps their culture celebrate that," Perkins+Will's Interior Design Global Practice Leader Fred Schmidt said. “We originally began this project in May of 2012, with SRAM moving into their new office in May 2015,” a representative for Perkins+Will told mental_floss. “The project took three years to complete due to the former cold storage building’s having to thaw, prolonging the renovation process. The actual design process took 18 months, post-thaw.”

There are obviously many questions to be raised when considering the impact of combining pedestrian and bicycle traffic within one office, but they approached it similarly to bicycle traffic on the street. They began by using a test track to get people used to the idea, and seeing what issues immediately arose. The tracks were created in light of standard Chicago bicycle lanes, highlighting paths where traffic crosses, noting where to caution, and so on. It should be common sense that they cannot bicycle too fast inside the office, but either way, employees have an extraordinarily unique way to move around their building.

The other implication of this endeavor may be simple, but it's important: by creating a small bike-friendly community literally within the confines of their office environment, they are receiving a kind of first-hand experience with design, implementation, applicability and safety of a bike-friendly community. A stronger focus on walking, biking and other forms of transportation that clear up our roads, carbon emissions, and get us outside and engaging in something healthy is something urban planners and activists alike have advocated for years. Now, we're really starting to see the effects of those motions come into full fruition.