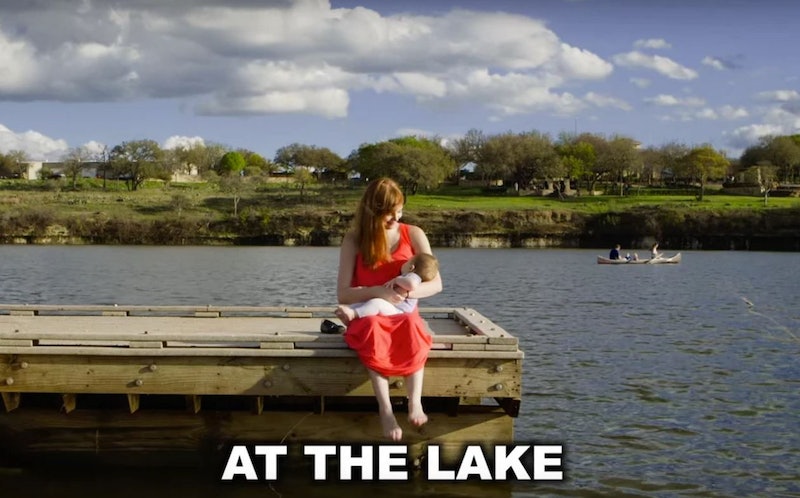 New mom Caryn Canatella has an important message to share about where women are allowed to breastfeed: everywhere. In the video "Where to Breastfeed" on her YouTube channel, Canatella in fact goes through a whole list of places and activities that make for perfectly acceptable times to breastfeed. Because hell yeah.

Despite the fact that breastfeeding is a natural process — not to mention the fact that nursing in an unhygienic public restroom isn't healthy for either mother or baby — there's a lot of stigma associated with breastfeeding in public. Since babies still get hungry whether the strangers around them approve or not, this stigma is obviously unfortunate. Plus, breastfeeding is tricky enough without trying to deal with tight quarters or judgmental strangers.

In recent years, there has been a lot of progress towards making life easier for nursing mothers, such as new policies at companies like Target and more designated nursing areas in places like NFL arenas. Furthermore, as the National Conference of State Legislatures points out, 49 states, the District of Columbia, and the U.S. Virgin Islands have laws that expressly permit breastfeeding in any public or private location. But still, there exists a lot of stigma, not to mention a widespread feeling that women aren't — or shouldn't — be allowed to nurse in public.

Canatella, though, has other ideas. In her video, which also shows off nursing-friendly clothes from company Latched Mama, Canatella goes through a list of places women are allowed to breastfeed, Dr. Seuss style. They include, but are not limited to, the following:

9. Inside Of A Fountain

For more breastfeeding location ideas, check out the video below: