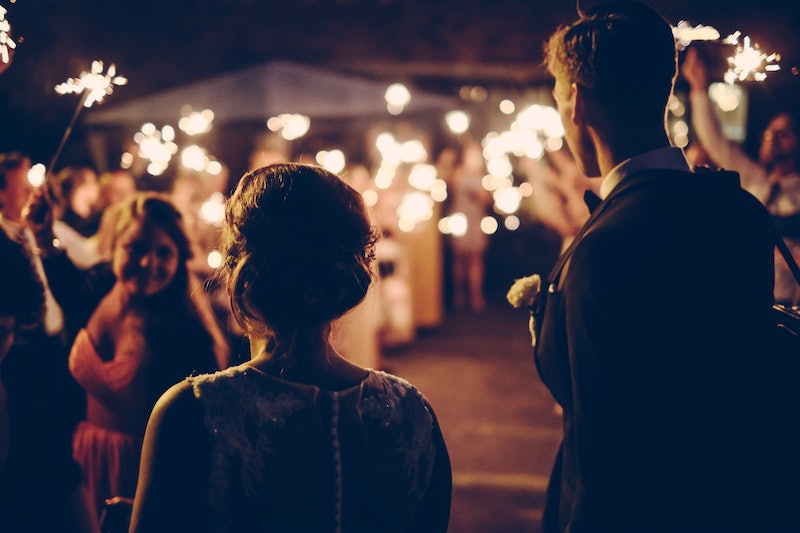 While I know weddings can be expensive for the couple getting married, it's not exactly easy on wedding guests' wallet either. As a wedding guest, the cost of attending can get pretty pricey — you have to figure in costs of how to get there, where you’re going to stay, what you’re going to wear, and of course, how much you should spend on the wedding gift. While figuring out what what you’re going to gift the couple on their special day becomes much easier with wedding registries, some people may have more expensive tastes than others.

Well, RetailMeNot, the go-to site for all your coupon and promo code needs, conducted a study to find out how much money people typically spend on wedding presents. On average, people spend anywhere between $45 to $195, Refinery 29 reports. However, your relationship to the couple really dictates how much money you really should be spending. As in, the closer you are, the more you’re expected to spend. Which, of course is unsurprising. I mean, you’re not going to dish out hundreds of dollars on a cool kitchen gadget for someone you’re only kinda-sorta friends with.

According to The Knot, $45 is actually on the lower end of the wedding spending spectrum. In fact, their wedding gift etiquette rules suggest never spending less than $50. Furthermore, 98 percent of couples have at least one registry list in store or online, and nearly 85 percent of brides expect you to pick a wedding gift from that registry.

Here are some findings from the RetailMeNot study:

1. The Tier Of Spending

Like I said earlier, how much people are willing to spend is determined by how close their relationship is to the couple. It usually goes like this:

2. People Think You’re Not Obligated To Give A Gift If You Don’t Plan On Attending

According to the study, only 41 percent of people said it was important to send a wedding present even if you don’t plan on attending.

3. People Prefer Not To Gift Cash