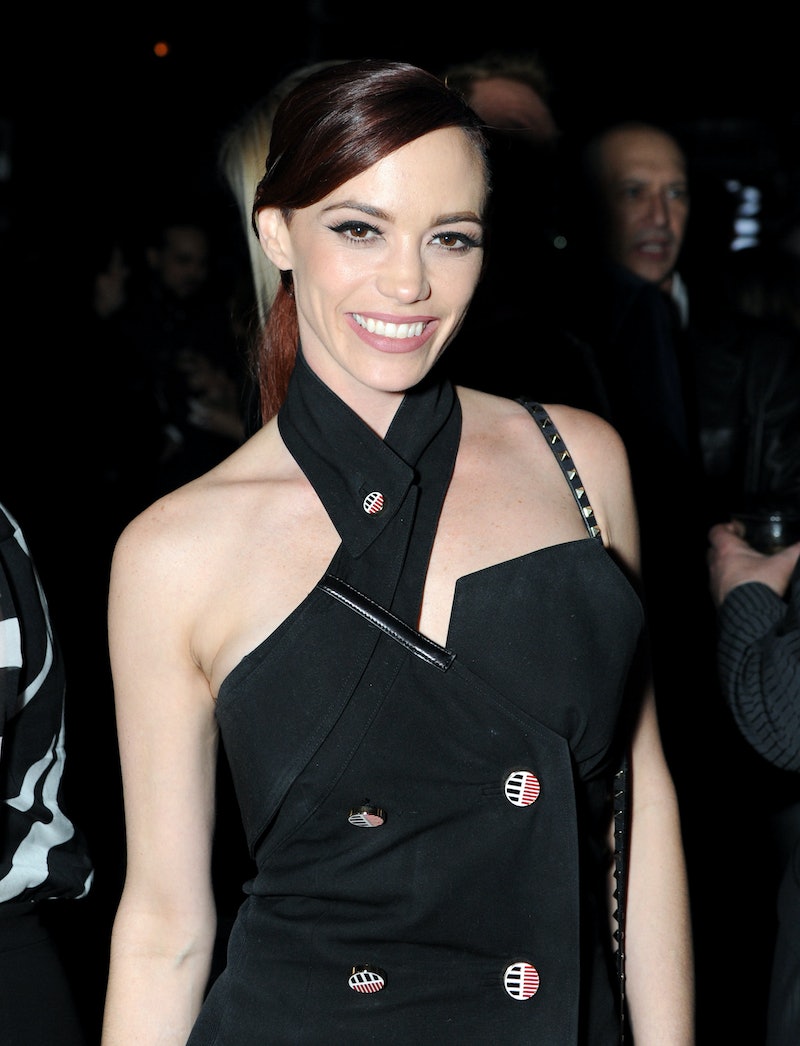 Don't cha wish you could've been a member of The Pussycat Dolls? If you're a fan of the girl group who were extremely popular in the mid-2000s, then I know you totally did (and maybe even still do). Even though PCD is no longer together, the group's former members have their own solo careers and are doing just fine for themselves, including Jessica Sutta, who goes by "J Sutta" professionally. In fact, J Sutta's new music video for "Forever" dropped Monday and as she tells Bustle, she couldn't be more thrilled. "We just created this fantasy-filled world that I feel fits so well with the song," she says. "So, I'm just excited for it to be out."

When asked how she would describe the video (directed by Jose Omar) she says with a laugh, "It's far out," and then adds, "Let me just say, it's eye candy, it glows in the dark, [and] it's one of my favorite videos I've ever done."

Like the video, the song "Forever" is very meaningful to the 33-year-old singer. Co-written with her friend Willie Peters, Sutta says they "wanted to make a song about being in a place in your life that's still so much euphoria, so much love, that you never want to leave it forever." Everyone's type of "forever" varies, but she believes everyone can relate to wanting to find long-lasting happiness. "It's just being in that place in your life and never wanting to leave and wanting it to last forever," she says passionately.

Well, I think it's safe to say the video does just that. You can check it out for yourself here:

If you love the song and the video (which I'm sure you do), you'll also be happy to hear that Sutta's album is slated to drop sometime this summer. As for the name of her upcoming album, it was formerly titled Feline Resurrection, but she's changing it. "At the moment, we do not have a name," Sutta confesses. But she promises the album, and its title, will reflect her current state of mind and what it's taken for her to get to where she is as an artist.

She says, "The album has been taking about three years to make. I've grown up so much during the process. My artist has grown so much. My voice has grown. The album name is gonna hopefully come to me very soon, because it's a reflection of where exactly I am in life right now."

Ever since departing The Pussycat Dolls, Sutta has been hard at work on her solo career, which is reflected in her new music. It's been a scary ride for her, but she's grateful that the fear pushed her in the right direction. As she says,

For me as an artist, the scarier the better. When I was in the studio and it was a challenge for me, there were tears in the sound booth, and I knew that it was going to be an incredible outcome. I really wanted to [push] the boundaries and really just go outside of what I knew as an artist. It really made me grow and it's such an amazing, rewarding feeling, especially listening to it and having family and friends listen to it, too. They've seen how much I've grown and it's awesome.

Her path as a singer hasn't been an easy one, especially with her father telling her at a young age, "You know, you're not a very good singer. You should try something else." Sutta says, in a way, she should thank her dad, because his discouraging words "ignited a fire" within her that's helped her dream come true as a solo artist and as part of a music group.

Luckily, Sutta's career gives her the opportunity to inspire others and never discourage them from following their dreams. That's most definitely what she and The Pussycat Dolls did as a group. You could say they were the Spice Girls of the 2000s, especially because they also promoted girl power, something that is extremely important to Sutta. She says,

I think it's imperative for me to inspire young women to follow their dreams and to stand as pillars in this world. I feel like women are very strong creatures and we can achieve anything we want. It means so much to me, because for me as a young woman that had Debbie Gibson who inspired me, Janet Jackson, Britney Spears, I looked up to these women, because this is what I wanted to be. I wanted to be on stage, be a singer, be a performer. If it wasn't for their inspiration, maybe I wouldn't have had the guts and courage to do it.

There's no doubt she and The Pussycat Dolls inspired women of all ages everywhere. Speaking of her time with PCD, is there any chance they will reunite? As much as she loved performing with the other ladies, at this point in time, Sutta's very focused on her solo career. "I say never say never," she says about a possible reunion, "but I'm on my path right now."

That said, she did cherish being with PCD, because it taught her so many things. "It was a learning experience in a group and it was amazing, but as a solo artist, it's all on me," she says. "There's a lot more thrill to it, that's for sure. There are no off days anymore. I have to be on 110 precent, but I like that. I know I'm at a place right now as an artist and as an individual and as a woman that I'm ready for that."

With a new video and her impending album, it's clear Sutta's hard work has paid off. She truly hopes her fans appreciate what she's created and realize how's she grown as a solo artist:

I'm most excited for [fans] to hear the growth in my voice and the sound that I've created. I hope they take away inspiration, because I was very honest with my writing. I basically have my heart on my sleeve. I feel like the more honest and the more true I was in my singing and what I was speaking from, it's really gonna change peoples' lives. I hope they become inspired and I hope that they can put it on and get lost in the fantasy of my music.

Based on her "Forever" video, I don't think that's going to be a problem.