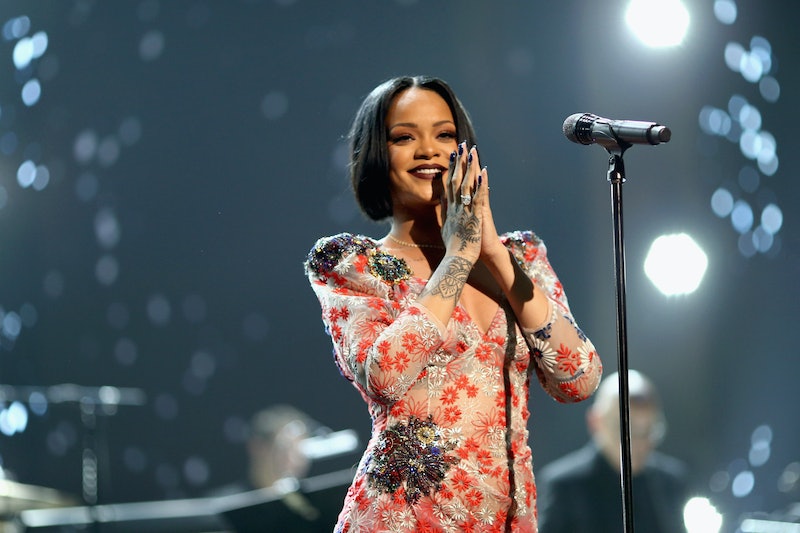 Sigh, Rihanna. Every time I look at the singer my heart swells up. Not just because her "Work" video with Drake is extremely titillating, but because she's always evolving, but still staying herself. Her long, long-awaited eighth studio album Anti was released in January, and the 28-year-old is still making moves in the fashion world, recently debuting Fenty, her premiere collection for Puma, at New York Fashion Week. Rihanna manages to constantly change, but always stay true to herself, and that's what I admire so much about her. As her mother, Monica Braithwaite, told Vogue, RiRi is "Always changing. Always switching it up. She’s always been like that."

Anyone will tell you that Robyn Rihanna Fenty is talented, generous, beautiful inside and out, and one of the hardest working women in business. Friend and collaborator Jay Z told Vanity Fair that what's special about Rihanna is that "she's someone who is genuinely herself. People connect with her. You are seeing the authentic version of who she is. You can see her scars and her flaws."

And it's that comfort with herself that makes Rihanna such a powerful figure. Here are 11 quotes from RiRi about being totally, unapologetically herself.

1. She Made Fans Wait For Anti

But it was worth it. As any member of the Rihanna Navy can tell you, there was an excruciatingly long wait between Rihanna's seventh studio album, Unapolagetic, in 2012 and the release of Anti in January 2016. But Rihanna felt like that time was necessary to find the exact right sound and message. And though she knows that it caused her avid fans distress, she knew they would wait for her. In an interview with NME last fall, she said that it was just more motivation: "It makes me excited, because I can’t wait to give them something great."

2. She Rejected Every Sound Except Her Own

Anti is a unique album in that it is totally, completely, singularly Rihanna. In her April Vogue interview, when asked if she was "bored" with pop music, she answered with an emphatic yes: "I just gravitated toward the songs that were honest to where I’m at right now."

3. She's Not Making Music For The Charts

Rihanna is not only a phenomenal artist, but she's very aware of the industry she's performing in and how she's defying its expectations and subverting what's expected of a pop album. Anti is that philosophy in a nutshell, a sexy stoner trip-hop soul album that showcases Rihanna's roots. RiRi knows that's a risk in a landscape of easily digestible pop, but it was one she was not only willing to take but one she had to. "It's like a PSA," she told Vogue. "It might not be some automatic record that will be Top 40. But I felt like I earned the right to do that now."

4. She Does Her Instagramming Herself

When Rihanna sat down for a New York Times Magazine interview with Miranda July, she was asked if she does all of her Instagram posts herself. Rihanna said, "Yeah, yeah. That’s the only way it’ll actually work. My fans can sniff the BS from very far away. I cannot trick them."

Any and every article or interview you read about RiRi will tell you that she is an extremely hard-worker — as they should, to serve as a reminder that her level of talent and fame are not easy and carefree but rather the product of her dedication and focus. What's not on her schedule? A man. But that doesn't mean it's out of the question forever: "[My schedule] is definitely going to be a challenge when I do decide to pursue a relationship... but I have hope!" Whoever ends up with her is one lucky guy.

6. She Only Has One Regret In Her Life

And it's a fashion snafu that she can't forget. In 2014 when Rihanna wore that now iconic, slinky, sheer, Swarovski-crystal studded dress to accept her CFDA award, she wore a beige thong underneath — and that, according to her, was a huge mistake: "I just liked it better without the lines underneath. Could you imagine the CFDA dress with a bra? I would slice my throat. I already wanted to, for wearing a thong that wasn’t bedazzled. That’s the only regret I have in my life." RiRi, thank you for letting the world see you in that dress. We didn't deserve it. You should regret nothing.

7. She's Not Down For Casual Sex

At least, not right now. Rihanna talked to Vanity Fair in November 2015 about her thoughts on hooking up: "If I wanted to I would completely do that,” she said. “I am going to do what makes me feel happy, what I feel like doing. But that would be empty for me; that to me is a hollow move. I would wake up the next day feeling like sh*t."

The hullabaloo around the controversial music video "B*tch Better Have My Money" doesn't get to RiRi. Though Rihanna's video was heavily criticized, she said of the song to Vogue , "It's just a way to describe a situation. It’s a way to be in charge, to let people know that you’re all about your business."

9. She Fears Fame & That Keeps Her Grounded

The secret to what makes Rihanna so wholly Rihanna is her reluctance to be blinded by the fame and glitz that covers what is a stressful and ugly world of rumors. She told Vanity Fair,

I honestly think how much fun it would be to live my reputation. People have this image of how wild and crazy I am, and I’m not everything they think of me. The reality is that the fame, the rumors — this picture means this, another picture means that — it really freaks me out.

10. She Finds It Tough To Be Vulnerable

It's easy to forget that Rihanna is only 28 years old, so it's difficult to imagine her being of afraid of anything. But in an interview with Harper's Bazaar in February 2015, she admitted what she feared — although it was not swimming with sharks. "Sometimes the toughest thing in life is to be vulnerable," she said. "I'm not generally a sensitive person, but I tend to be more sensitive toward others and what they're going through. I don't know if that's the healthiest thing, but it's the truth."

11. She Stands Up For Herself

Back in 2012, Rihanna got a lot of flack from the public about collaborating with her ex-boyfriend Chris Brown on her song "Birthday Cake Remix." And during an interview RiRi did with Esquire UK that year, when asked to explain why she chose to collaborate with Brown, and she said (quote via The Grio),

When you realize who you live for, and who’s important to please, a lot of people will actually start living. I am never going to get caught up in that. I’m gonna look back on my life and say that I enjoyed it — and I lived it for me — and God. This is turning into a tacky interview. What do you really want to talk about?

If there's one thing I know for sure, it's that when it comes to staying true to yourself, we could all learn a lot from Rihanna.