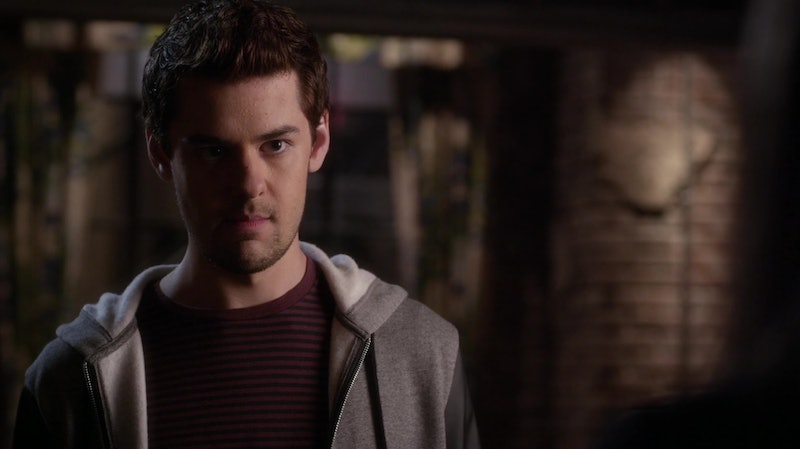 It is not a good time to be any of the Pretty Little Liars. The women of Rosewood went from living five peaceful, A-free years to being tormented by a Big Bad so vicious that they are willing to flat-out kill people in order to seek vengeance. In the Season 6B finale, it was revealed that Jessica DiLaurentis' twin Mary Drake and Alison's husband Dr. Rollins were working together in order to take control of the Carissimi Group, which also meant taking down the Liars. However, there's yet another person that the Liars should be afraid of. The mysterious A.D., who texted the Liars at the end of the Season 6B finale, could be the biggest bad of them all. One theory posits that this villain is someone we've known for a long time, as some fans believe Lucas is A.D. on Pretty Little Liars.

Lucas became very successful in the five-year time jump. He made a mega fortune, started driving around in only the swankiest of cars, and keeps a sweet "smart loft" in his hometown for impromptu vacations. But Lucas also returned to Rosewood at almost the very same time that the Liars did — which somehow, no one seemed to question. What if Lucas' return to Rosewood was no coincidence, and instead, it was to keep tabs on the girls as the mysterious A.D.?

Here are just a few reasons why Lucas could be Pretty Little Liars' ultimate Big Bad.

Though A.D. is loyal to Charlotte, this mysterious figure isn't loyal to Ali — after all, A.D. seemingly helped put Ali into a mental institution. While Mary and Dr. Rollins are fighting against Ali because of their love for Charlotte (and their desire to make some serious cash from the Carissimi Group), A.D. might have another, equally sinister motivation. Maybe Lucas is helping Mary and Dr. Rollins because he hates Ali and never forgave her for bullying him years ago. Wasn't he the one who told Mona that Ali would "get what's coming to her"?

2. He Could Be Hiding Out In Rosewood

We know that A.D. likes to hide in plain sight, and those insane rubber masks definitely help the cause. Lucas pops up randomly in Rosewood, allegedly because he travels so much for work. That could be true, or it could be a good cover for when he's secretly posing as an old man at the Radley. Unlike some of the other characters on the show, Lucas is essentially a free agent with unlimited funds — who would notice if he spent his time and money torturing the girls?

3. His Offer To Hanna Was Super Suspicious

Lucas may be playing the "nice guy" now by giving Hanna the opportunity to work on her fashion in Rosewood at his factory (still dying over that #SugarDaddyLucas hashtag), but that could also be a part of the plan. Whoever A.D. is, they want the Liars to stick around town so they can find out who really killed Charlotte. What if Lucas buying Hanna that factory had little to do with a desire to help her, and a whole lot to do with keeping her and the rest of the girls in town? (Because, let's be honest here, the offer was already pretty creepy.) For more on this offer and everything else PLL, check out Bustle's podcast Taking This One To The Grave.

Hmm... anyone else think it's just a tad odd that Lucas' smart loft went haywire when he left town? The new A would likely have the tech skills to hack into Lucas' fireplace in order to burn Aria, but the fact that all of this happened in Lucas' house is definitely suspicious.

5. He Could Be Using His Loft To Keep Tabs On The Liars

It was nice of Lucas to let Emily and Hanna stay in his loft — unless it had nothing at all to do with being nice. Remember when Mona gave Hanna her old phone, only for the Liars to realize that it was recording their conversations? The very same thing could happen with Lucas, only instead of a phone, it's an entire loft being used to record the Liars.

6. He Has Impressive Tech Skills

Charlotte's lair at the end of Season 6A was extremely high-tech, and it just so happens that Lucas made his fortune in the tech world. Could he have been working with Charlotte back in her Big A days?

Right now, many fans assume that A.D. is either a member of the DiLaurentis or Drake family, but that could easily be a misdirect. A.D. could stand for absolutely anything, and it might just stand for Lucas.