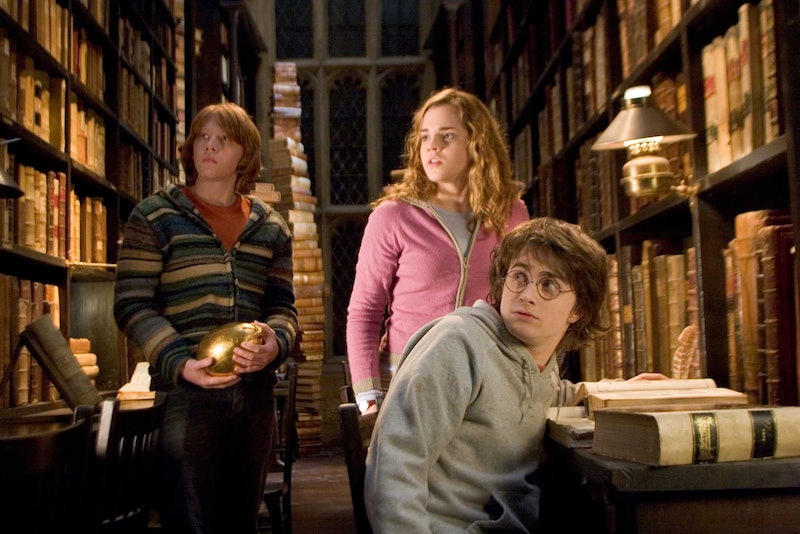 I am a die-hard, lifetime Harry Potter fan, and I am currently dating a man who has not finished the series. He has only read he first three, which he refers to as "the originals," as though all subsequent books were extended universe novels. He does not get my frequent references or quotes. This is a big deal, and also a testament to my love for him. I once stopped seeing a man after a second date because he told me he didn't understand my obsession with Harry Potter. So the fact that I've been with my current boyfriend for almost two years means a lot.

Slowly but surely, however, he's beginning to come around to the idea of embracing a more Harry Potter-filled life, which is very exciting. The Harry Potter books are hugely important to my life, and something that I want to share with him. Lately I've been brainstorming ways to reintroduce him to the series, knowing that it won't be as simple as asking him to pick up the books at the library and start reading.

I'm sure many of my fellow Harry Potter fans have family, friends, or significant others who don't understand our obsession, despite our many efforts to convert them. Below are a few tips for introducing your favorite muggle to the series. I'm going to try these out on my boyfriend and the other Harry Potter newbies in my life.

1. Explain why Harry Potter is so important to you.

Many of us began reading Harry Potter during the most formative years of our life, and we grew up with the characters. If you're asking someone special in your life to check out Harry Potter, you have a reason for doing so. Maybe Harry helped you get through a rough time in your life, or maybe you want to share an important part of your childhood. Or maybe you just really want them to be able to understand your jokes and references. Whatever the case may be, telling them why the characters mean so much to you will probably go a long way toward convincing them to pick up the series.

My younger a cousin will be old enough for Harry Potter in another year or two, and I am so excited to be able to give him the books as a Christmas gift. I remember exactly where I was the first time I picked up Harry Potter and the Sorcerer's Stone, and I can't wait to be a part of that moment for someone that I love. If your muggle is willing to read the books for you, thank them by getting them their very own copies (bonus points if you get them a particularly gorgeous edition).

3. Watch the movies together.

I almost always recommend the original text over the movie adaption, but if your muggle is hesitant about starting the series, show them a movie or two first. This will introduce them to the world and give them a basic idea of the plot with less of a time commitment than reading the novels. If, after two movies or so, they seem interested enough to continue, you can either lend them the rest of the films or ease them into the novels. They may never want to commit to reading the entire series (sad face), but at least if they finish the movies they'll understand most of your references!

4. Start with the audio books.

If your muggle isn't the quickest reader, starting the Harry Potter series can be daunting. There are 4,224 pages in all seven books, and that doesn't even extend to companion books and fanfiction that you're obviously going to expect them to read as well. So instead of just plopping a mountain of books in front of them, start listening to the audiobooks together. You two can spend time together, they get to experience the magic of Harry Potter, and you get to watch somewhere enter the Harry Potter universe for the first time. Everyone wins!

I had a friend in high school who never read the Harry Potter books, and I was determined to save him (yes, I am a long-time Harry Potter evangelical). So I made a deal: I would watch his favorite series if he would read all seven books. Because I am a terrible person, I did not finish the series. But he read all seven books! So, offer up a trade: you will watch/read/try one thing that your muggle loves in exchange for them giving Harry Potter a chance. Just be a better human than I am and actually follow up on your end of the bargain.

6. Show them this picture of Matthew Lewis.

Lie and say that this picture is a still from the last Harry Potter movie. Tell them they need to get through all seven of the previous movies if they want to see more. They will be pissed when they find out you lied to them, but by then it will be too late. (This may only work if they're attracted to men, but honestly that picture is so great that I think it appeals to a pretty wide audience. When in doubt, show them an equally gorgeous picture of Emma Watson.)