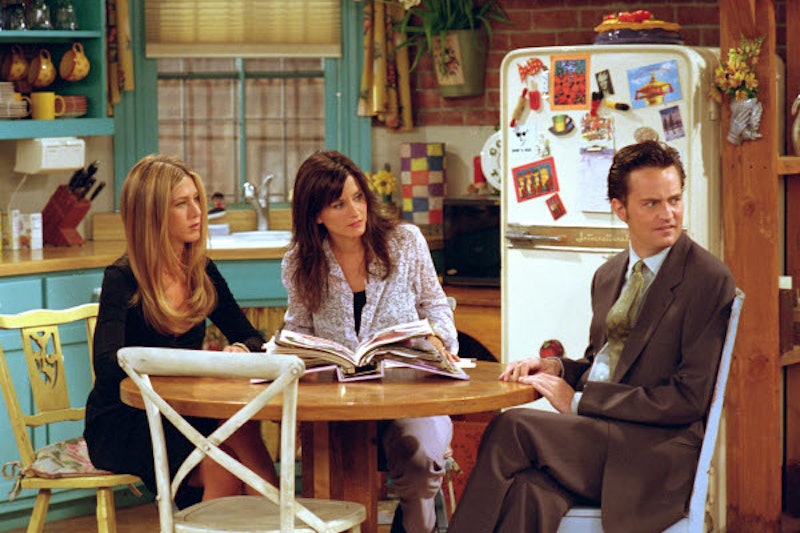 If there's one thing that I am certain mankind will never get over, it's Friends. Although the show has been off of the air for almost 12 years now, plenty of people are still salivating over any little tidbits or extra information able to be unearthed. And hey, no judgement here — I am just as guilty of this as the rest of you, which is why I've decided to compile some of the best Twitter accounts sharing Friends bloopers and behind-the-scenes videos. Believe me, if you're a fan of the show, you've got to see these — especially since most of us were just kids when all this goodness made waves the first time around.

I enjoy watching bloopers for any television show, but there’s something about the Friends cast’s obvious camaraderie that makes it especially gratifying to see. It’s like watching a bunch of real friends hanging out, except for the fact that they’re getting paid a super enviable amount of money to do so. Thank the sitcom gods for the different Friends bloopers, behind-the-scenes goodies, interviews, and whatnot below, but first, start with this classic.

Can Friends be any better than that? Well, maybe.Check out these 13 videos below.

1. When The Cast Messed With Matthew Perry

So much FOMO. I want to be their friend, too.

2. When The "Pivot" Plot Thickened

For once, Ross's dramatics were warranted.

It's too much, honestly.

5. This A+ Baby Photo Screenshot Of Matt LeBlanc

6. When Jennifer Aniston And David Schwimmer Were #CoStarGoals

They were giggling together. GIGGLING.

7. When The Cast Got Extra Friendly With One Another

9. When Lisa Kudrow And Jennifer Aniston Screwed Up Spectacularly

10. When David Schwimmer And Matt LeBlanc Did More Play Than Work

What a beautiful bromance.

11. When Matt LeBlanc Told Barbara Walters That The Friends Were A United Front

*Sings while crying* "I'll be there for youuuuuu..."

12. When Courteney Cox And Matthew Perry Trolled The World In The Worst (Best) Way

When are they going to reboot this thing? Stop playing, Friends powers that be.