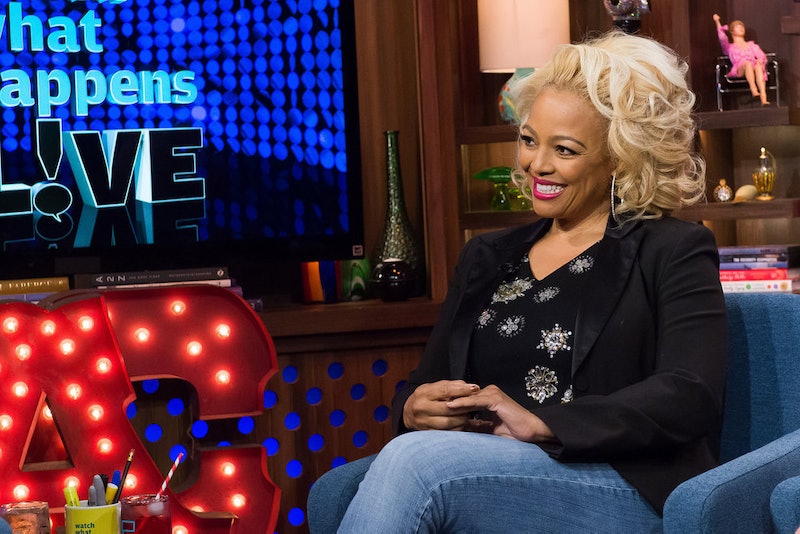 As much as I've enjoyed parts of The Real Housewives of Atlanta Season 8, I have to admit that it was pretty repetitive, with constant back-and-forth arguing between a few duos, including and especially Kenya and Kim. And on the Reunion Part One, it took a fight between Kenya Moore and Kim Fields to see if Kim belongs on Real Housewives of Atlanta . Personally, I think that should be up to the producers (because Season 9 needs a shot in the arm), but the other cast members had their own strong opinions. Every single member of the cast said that they don't think she belonged in the group, and came across as too judgmental, too haughty, and too confrontation-shy in order to fit in. Cynthia probably had the most generous response, when she said that Kim just seemed a little "uncomfortable" with the group like she didn't quite know what it was like to hang out with a group like this. And until the drama exploded during this episode, I would have completely agreed.

But Kim showed up to the reunion prepared to read, throw shade, and, if I may say so, with one hell of a beat (and I loved her 1950s Hollywood lounge pants!). As soon as Kenya started to come for her, she fired back. Of course, she was still Kim, so nothing got beyond an epic eyeroll and a particularly indignant "Seriously?!" in response to some of Kenya's ridiculous comments. As Kandi said, it was fun to see Kim's "bossed up" moments.

And the reunion's many clip packages were a great reminder of just how many times Kim Fields and her kids cried over the course of the season. Her issues of childcare again, didn't really fit in with this group. Most of the ladies have older children, and Phaedra somehow manages to take her kindergartener and toddler everywhere with nary a peep. I have to admit, if Kim returns (and she ought to based on this reunion performance), I hope she's more willing to hire a sitter every once in a while.

But until then, Kenya is happy to continue spending her time on the show by making Kim Fields more entertaining. In an upcoming reunion episode, there's even going to be a conflict between Kenya's boyfriend and Kim's husband.