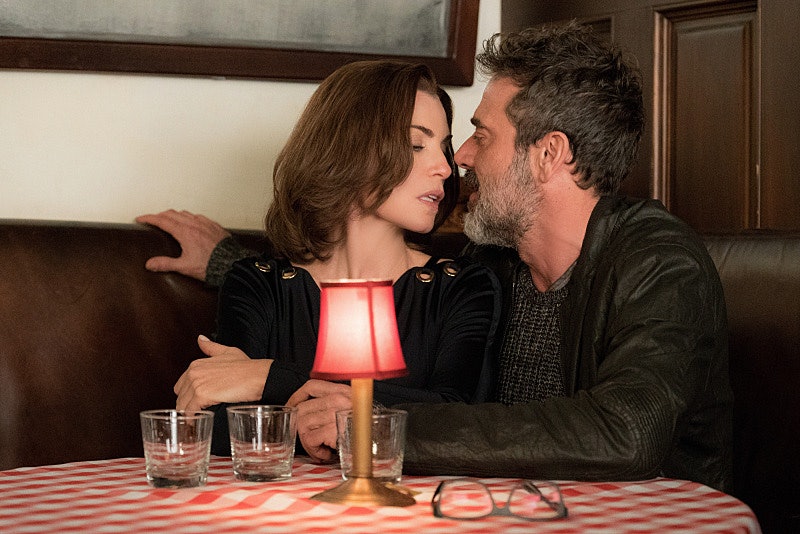 Alicia and Jason's new relationship bubble finally popped on The Good Wife with surprising results. Ever since Alicia jumped into bed with her private investigator, the pair has been in blissful lust. It turns out, Alicia has a thing for the office romance. But, every honeymoon phase must come to an end, and after an awkward run-in at a bar in "Shoot," Jason and Alicia's ended pretty swiftly. With the new relationship bubble burst, Alicia and Jason had the talk on The Good Wife , and the results might not be what you'd hoped.

Alicia and Jason have kept their relationship relatively quiet. If you don't count Alicia's mother, her brother, Eli, Peter's lawyer and, of course, Lucca. Still, the pair is still keeping things under wraps at work, and it's pretty evident that they haven't defined their relationship — after all, she is married to the Governor. When the episode started, Alicia and Jason were still enjoying their secret affair, but things got frosty after Alicia saw Jason kissing another woman at a bar. Unsure of what to do, Alicia didn't confront him. Instead, she decided to talk to her newest BFF Lucca, who reminded her that she is an independent woman. Just because she's had her heart broken by a cheater in the past doesn't mean she will again. Besides, Alicia is married, and she knew that she and Jason hadn't defined any kind of boundaries for their relationship.

Still, she's awkward around Jason and is awkward enough around him for him to know something's up. Lucky for him, he doesn't have to figure it out on his own. Lucca, feeling good with her new office at Lockhart, Agos & Lee, takes matters into her own hands and drags Jason into her office and tells him that Alicia saw him the other night. When Jason later confronts Alicia about what she saw, she brushes him off, repeating to him what she had told Lucca. She's married, so if anyone has any explaining to do, it's her. Even though Alicia doesn't seem interested in defining their relationship, Jason hinted that he might be ready to make this a one woman-one man affair when he told her he was jealous of her husband.

OK, so, the talk between Jason and Alicia was more of a vague admission of mutual jealousies, but it definitely suggests that they are somewhat committed. At the very least, their relationship is more than just sex. As for what this means for the future, who knows?