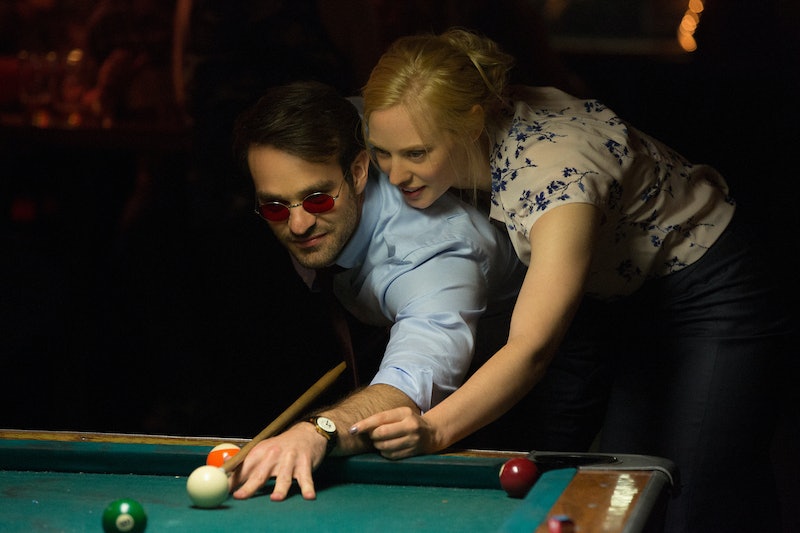 Spoilers ahead for all 13 episodes of Daredevil Season 2. After two seasons and 26 hours, Matt has finally confessed his alter ego to his friend, co-worker, and (very briefly) girlfriend, Karen Page. In a scene that made for quite the mic drop (followed up by the even bigger mic drop of the foreshadowing of Elektra's resurrection), Matt told Karen that he's Daredevil in the Season 2 finale.

It was quite the succinct scene. After hemming and hawing for a couple beats, Matt simply showed Karen his devil-horned mask, and said, "I'm Daredevil." And that was it — we'll have to wait for Season 3 (which is unconfirmed but very likely) to gauge her full reaction, which is sure to be seismic. Of course, it probably didn't come as a complete surprise. When Daredevil rescued Karen from The Hand earlier in the same episode, there was a definite spark of recognition between the two characters. Still, the confession was a big moment and works nicely as a cliffhanger.

After all, it could end up meaning big things for Matt and Karen's relationship. In an interview with The Chicago Tribune, Deborah Ann Woll, who plays Karen, talked about how their secrets were keeping them apart. As she put it, "There's always going to be this distance because she's not being fully honest with him, and he's not being fully honest with her." Now that at least part of that distance is gone, what does it mean for their relationship going forward? Will the spark that so quickly fizzled out after Elektra's arrival in Episode 4 get reignited?

Signs point to yes, but it will likely be a while. After all, Matt literally just confessed his love to Elektra (who, let's face it, is definitely not dead), and Karen may or may not be harboring some Beauty and the Beast-esque feelings for Frank Castle. Although, it's worth noting that in aninterview with Comic Book Resources, Woll referred to their connection as more of a mentor-student relationship, a la The Silence of the Lambs . Plus, Karen still hasn't told Matt about killing Wesley, which is another factor of the wedge between them — though maybe his confession will inspire one of her own.

Romantic notions aside, it will also be interesting to see how Karen takes the news from a moral perspective. As evidenced by her arc this season (which culminated in a think piece for The Daily Bugle), her views on vigilanteism are, to say the least, complicated. The information that her close friend/sort-of-boyfriend moonlights as the Devil of Hell's Kitchen might be a lot to take in, especially after all the debates they had about The Punisher this season, and the fact that he basically shattered her faith and trust in him. When you think about it, Matt's confession could actually spell out further estrangement between the characters.

With Foggy now a big shot at the same law firm for which Jessica Jones freelances, Karen off writing editorials for The Daily Bugle, and Matt going even fuller tilt as Daredevil, the employees of Nelson & Murdock have effectively been scattered to the winds. Everything is up in the air, and it's exciting to imagine all of the ways the chips could fall when Daredevil returns.