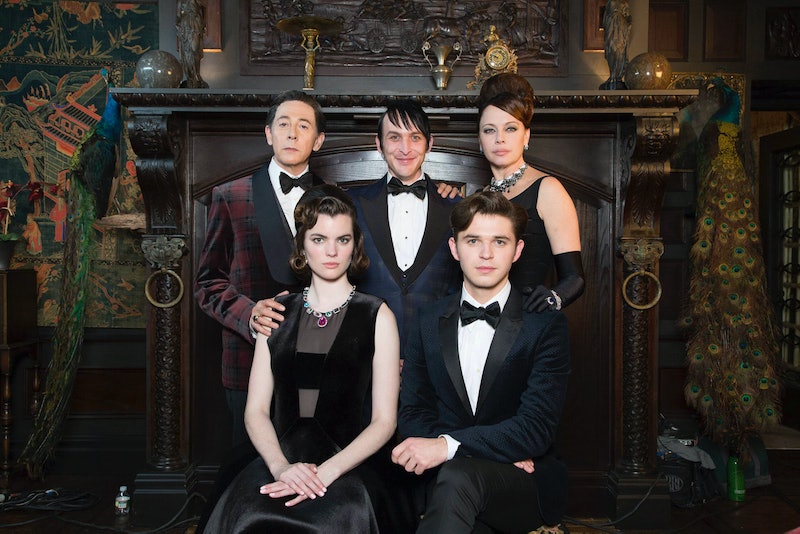 Gotham just took a huge page out of Tim Burton's Batman: Returns' book — and it's all about Penguin. Lately, the villain has been treated more like a pawn, bouncing between the GCPD, Arkham Asylum, and Ed Nygma's apartment complex, far from his eventual success as a wealthy and formally dressed nightclub owner and master of Gotham City's underworld. But when Penguin met his father, Elijah van Dahl, and his family, ushered into his true destiny as the member of a rich dynasty, it felt like deja vu. Paul Ruebens, who guest starred as Oswald's father, was also the rich father of the Penguin in Burton's film — the very same who sent his son away into the sewers when he discovered his child was unconventional looking.

This was slightly surprising, since I always thought that Gertrude Copplepot was also from a wealthy family, since they lived in an ornate (if old-fashioned and cluttered) apartment, and she had a strong accent, suggesting she was a recent immigrant. I was surprised to hear from Reuben's' character that she was supposedly nothing more than a kitchen worker who had a fling with a much wealthier man thirty years prior. But a big part of Oswald Cobblepot's character in many comic stories is his place in Gotham's aristocracy, so this could become a crucial piece of his backstory.

While Reubens is very believable as Oswald Cobblepot — or, should I say, van Dahl? — Senior, it's a bit of a coincidence that he happened to be at Gertrude's grave at exactly the same time that the newly docile Penguin paid a visit? Sure, it's possible he simply wants to reconnect with his estranged son. But I think it's possible that van Dahl may have a plan in place, and according to Gotham executive producer John Stephens' interview with TV Insider, "He’s a man with enormous wealth and even more secrets."

And the rest of the family appeared in a final scene, raising a glass to their new brother in a friendly, but also sinister fashion. Whatever the van Dahls are planning, they must have some use for the Penguin. And it seems like Arkham's certification of Penguin's "sanity" and his new, calm nature, might not last very long now that the van Dahls are involved.