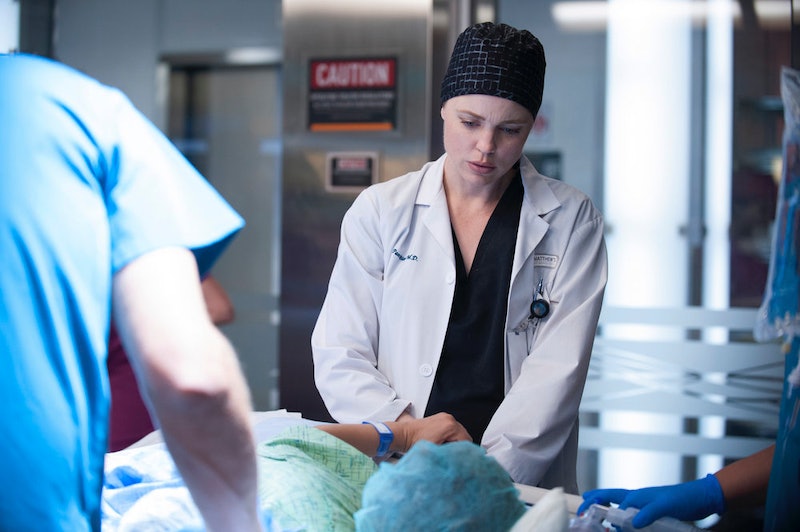 NBC's new medical TV drama series Heartbeat premieres on Tuesday night and it promises to take viewers into the world of female cardiothoracic surgeon Dr. Alex Panttiere (played by Melissa George). The character is based on real-life surgeon Dr. Kathy Magliato. So, if the doctor is inspired by a real person, is the Heartbeat hospital real? Not exactly. In a NBC sneak preview clip, Alex says the name of the hospital is St. Matthews several times, but there doesn't seem to be a real St. Matthews hospital anywhere in America.

But, that doesn't mean the fictional hospital hasn't had some inspiration from reality. Magliato, who also serves as the series' co-executive producer, has worked at plenty of hospitals over the course of her career. According to her official bio, Magliato is one of the few female cardiothoracic surgeons in the world and is currently the Director of Women’s Cardiac Services at St. John’s Medical Center in the Los Angeles area. Throughout her long career, the surgeon has worked and studied in hospitals all over the country, including Michigan, Illinois, Pennsylvania, Ohio, and more.

Here are some of the hospitals Magliato has worked in, according to her resume, and they could've possibly inspired St. Matthews in Heartbeat.

This is the current hospital Magliato works at, so why not? It would be fresh in her mind, after all. The Santa Monica medical center has been operating (ahem) since 1942 and is "rooted in Catholic tradition" according to its website. That sounds kind of like it could be St. Matthews, doesn't it?

Prior to joining St. John's, Magliato was a heart/lung transplant surgeon and Director of the Mechanical Assist Device Program at one of the largest academic medical centers in the country. The sprawling hospital campus is located mere blocks from Beverly Hills and the hospital, in real life, employs 2,100 physicians, and 2,800 nurses, according to the hospital website.

After medical school at Case Western Reserve University, Magliato did an internship and her residency in general surgery here. According to its website, the Ohio hospital is a century old and employs more 7,000 healthcare professionals.

Magliato did a research fellowship in thoracic organ transplantation after graduating for medical school. Its website boasts the fact that it is one of the best hospitals in the nation and it's been named the best in the Detroit area.

Or, perhaps St. Matthews is based on another facility entirely. We'll just have to see when the show debuts on Tuesday.