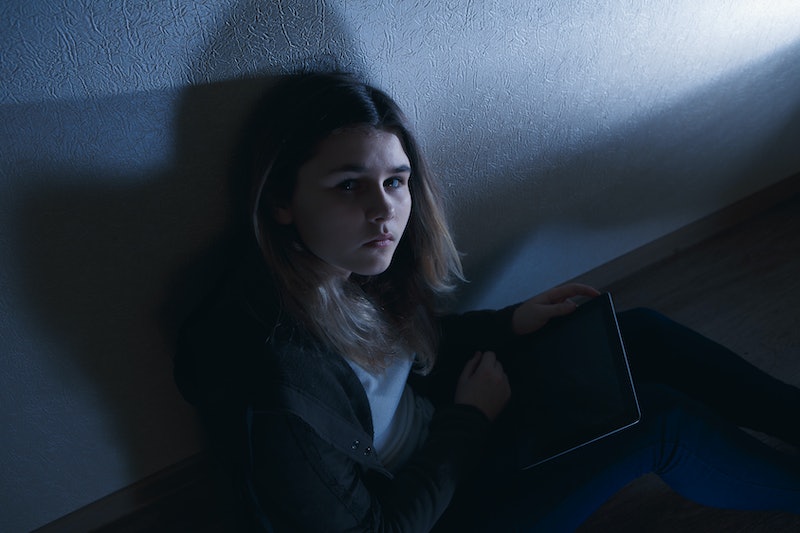 When one of my friends took a look at my Twitter notifications, she said she wished there were a service just to help women on Twitter deal with all the trolling they face. Well, now, there is: The service TrollBusters offers emotional support and reputation management to women writers dealing with harassment via Twitter. When a woman is receiving threats, sexual harassment, slurs, or any of the many forms of harassment women face on social media, she can report the incident through the TrollBusters website, and within an hour, their staff and volunteers will come to her rescue.

TrollBusters has three major offerings: Firstly, their team will send you positive, supportive tweets and emails. Being trolled can be an isolating experience, and responding yourself can just lead to more harassment, so having an ally can make all the difference to a target. "We try to dilute the stream with positive messaging," TrollBusters founder Michelle Ferrier tells Bustle over the phone.

TrollBusters also uses network analysis technology to identify groups of trolls. "It's a myth that trolls are all loners. They often work in concert, strategically," Ferrier told the Knight Digital Media Center. "If you track their networks, it becomes easier to filter them out of the conversation, and also to hold them accountable." She tells Bustle that she hopes to use this technology to identify a target of harassment before they even reach out. Thirdly, the service will connect the victim to legal, psychological, and technical resources to deal with the trolling. Its volunteers will also advise them on managing their online reputations using techniques like search engine optimization if negative messages are being spread about them online.

Since I have no shortage of inappropriate tweets in my notifications, I gave the service a try. When you arrive on the TrollBusters website, you can enter your or someone else's Twitter handle and a link to the offending tweet. Then, you'll get an email from TrollBusters asking for your consent to receive tweets from them. After that, they'll send a tweet like this from the @yoursosteam Twitter handle, and they'll continue monitoring activity from the offending user to address the situation if it escalates.

Ferrier tells Bustle over the phone that she created the tool in response to the harassment she faced as an African American journalist. "My hate mail actually drove me from my profession," she says. She developed this solution at a hackathon years later with several women journalists.

This is one of a few different offerings that has sprung up as awareness of online harassment has increased. President Obama even discussed the issue during a recent Women's History Month reception. “One thing I’ve been thinking about this past week is the unique challenges women face in the virtual world,” he said. Others have been thinking about it, too, and come up with a few other ways to alleviate the problem. Here are some of them.

Crash Override is a hotline to email if you're dealing with online abuse. Other survivors and experts will provide you with information about how you can deal with the harassment technologically, emotionally, and legally. The service will also monitor and report abuse for you so that you don't have to read it yourself.

The anti-street-harassment organization Hollaback! recently launched HeartMob, which lets users report harassment, call on others to defend them or simply send them support, and publicly out trolls.

This website is a comprehensive resource for women dealing with online harassment. It provides a glossary of terms to help them identify what they might be facing, information about what legal measures they can take, statistics about women and online abuse, and updates on legislation under consideration to address the problem.

None of these resources will end online harassment, but they can make victims feel a lot less alone, and that's one important step.