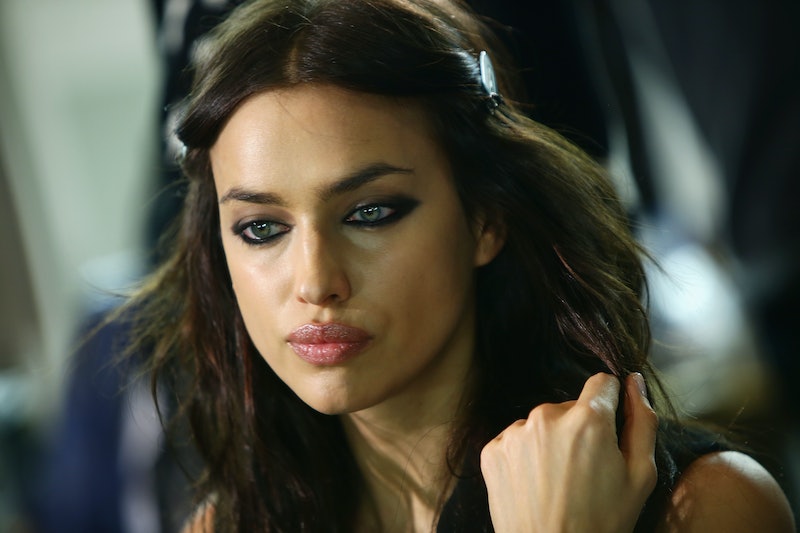 Blonde hair, don't care. Model and Bradley Cooper's main squeeze Irina Shayk made a drastic hair change, swapping out her normally brunette locks for blonde ones. It was quite a jarring change, with the model posting a photo of her new 'do hue on social media, defiantly asking, "Who says I can't be blonde??" In the snap, Shayk was rocking defined, shaggy ringlets, which nodded to a decidedly '80s aesthetic and which were quite the contrast to her blue eyes and majorly sculpted brows. But since Shayk is a model and her job requires drastic quick changes such as this, I also asked a question. Is Irina Shayk's new hair color permanent? Or is it a wig? Is it temporary?

While we will never scientifically know if blondes have more fun, it is an empirical theory and one advanced by Shayk, at least on social media. However, as The Daily Mail notes and as future Insta postings proved, the model returned to her normal chocolate locks a day later and her more recognizable color was restored. So it would appear that Shayk's pitstop at blonde was likely a wig. Or a super quick (and possibly damaging!) dye job

Observe Irina Shayk as a blonde. It was certainly a fun change for her, however brief.

She even joked in another photo that she only opted for this shade for a photo shoot with Mert Alas, with whom she posed for a selfie.

A day later, Shayk also posted a selfie featuring fellow model Naomi Campbell and Givenchy's Riccardo Tisci, among others, with her cocoa-colored locks swept off her face into an updo. One has to assume that this selfie was taken after the blond shots, since it wasn't a #latergram and Shayk even hashtagged this as her "Sunday gang."

So all of the evidence supports the fact that Shayk was blonde for a minute and for work. She quickly went back to brown. I am going to bet that she was blonde-by-wig.

If you blinked or took a day or two off social media, you would have totally missed it.