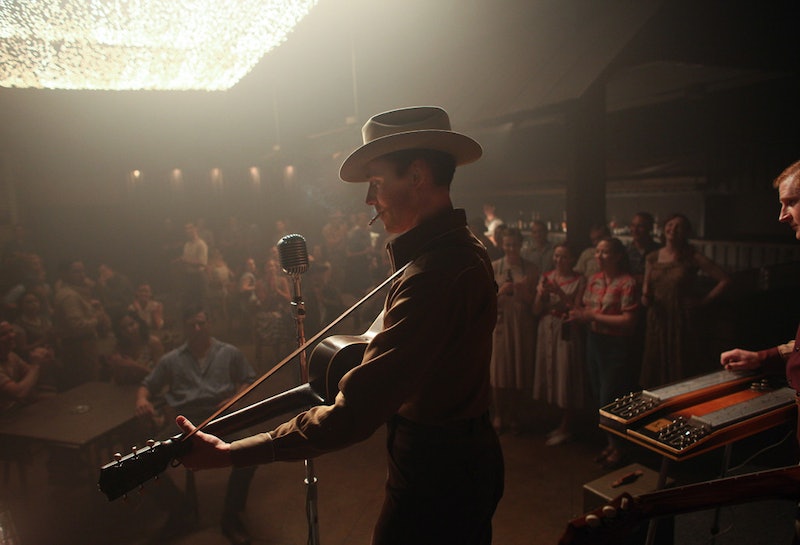 If Tom Hiddleston has you screaming "Hey, good lookin!," your body is probably ready for his upcoming Hank Williams biopic, I Saw The Light. In the film, out Mar. 25, the actor takes on the role of one of the most prolific and important country songwriters of the 20th century, a man possessed by not only talent, but drug and alcohol addiction. And despite some controversy surrounding Hiddleston's casting, the English star shows off some serious chops in the film, doing Williams' iconic voice justice. Mutual fans of Williams and Hiddleston can pre-order the I Saw The Light soundtrack on iTunes before it comes out on March 25, and if you're looking for some good weekend moping songs, it's filled with plenty of songs that'll fill you with emotion.

After Williams' tragic death at age 29 startled the 1950s music industry, his legacy continues to inspire musicians from a variety of genres, including Fats Domino, Lucinda Williams, Beck, and Ryan Adams. While Light arrives in theaters this Friday, its soundtrack, which features Hiddleston covering some of Williams' biggest tunes, might wind up being a big hit, so get ready for it with nine of the film's best tracks.

1. "Move It On Over" By Tom Hiddleston And The Saddle Spring Boys

Later covered by Ray Charles and George Thorogood, "Move It On Over" marked Williams' first big hit. Music critics consider it one of the first rock 'n roll songs, even though Sister Rosetta Tharpe should be credited with the development of that sound.

2. "The Tennessee Waltz" By Jo Stafford

The state song of Tennessee, "Waltz" was written by Pee Wee King and Redd Stewart in a car en route from Texas to Nashville. It became the perfect song for Stafford's voice; in her 2008 obituary, The New York Times remembered "her pure, nearly vibrato-less voice, with perfect intonation, conveyed steadfast devotion and reassurance with delicate understatement."

Like the fine line that Williams walked between rock 'n roll and country, Eddy Arnold was a jack of all trades when it came to singing. "He was more of a crooner than a hillbilly singer," reports CMT, "which is a large reason why he was embraced by the entertainment industry at large, and frequently crossed over to the pop charts."

As "Field Hand Man" shows, the Delmore Brothers created a harmonic sound much like that of the Beach Boys later in the century.

5. "Jambalaya" By Tom Hiddleston And The Saddle Spring Boys

Get out your dancing shoes for this favorite. Even if you're not a Williams fan, you've probably heard this song a thousand times without realizing it was one of his, as everyone from John Fogerty to Emmylou Harris to Garth Brooks has covered "Jambaylaya."

6. "Why Don't You Love Me Like You Used To Do?" By Tom Hiddleston And The Saddle Spring Boys

Isn't that the question behind every sad country song ever?

7. "Honky Tonkin'" By Tom Hiddleston And The Saddle Spring Boys

8. "That's What's Knockin' Me Out" By Jimmy Liggins

A bandleader in the '40s and '50s, Liggins was originally a professional boxer, so the title of this song makes a very fitting metaphor.

9. "Please Don't Let Me Love You" By George Morgan

Like Eddy Arnold, George Morgan had several crossover pop hits and is often compared to Bing Crosby. Fun fact: George Morgan is Lorrie Morgan's father; you might be familiar with his daughter's pro-consent anthem "What Part of No."

If you haven't heard this one before, you must. This is arguably Williams' best song.

Grab yourself a few tissues and give these songs a listen before heading out to the movie theater.