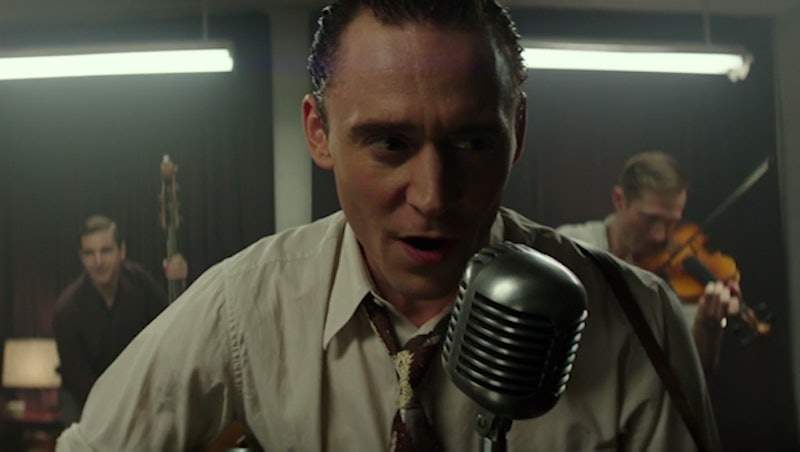 As if it wasn't awesome enough that Tom Hiddleston is playing country legend Hank Williams in the upcoming biopic I Saw the Light, you will now be able to listen to Hiddleston doing his best Williams interpretation whenever you want. The tracklist for the I Saw the Light soundtrack has been released, and it is full of Hiddleston goodness. Seven out of the 13 tracks feature Hiddleston and the Saddle Spring Boys as the lead. The digital soundtrack is set to drop on Friday, March 25, so you might as well go ahead and get your pre-order in now at iTunes, because you know you are going to be listening to the Hiddleston numbers on a loop at least until fall.

The best part is the soundtrack will hold you over until you can see Hiddleston in action as Williams yourself. I Saw the Light will premiere in New York, Los Angeles, and Nashville on Friday, March 25, but it doesn't open nationwide until April 1. If you're outside of those big cities, that gives you a whole week to listen to Hiddleston's take on "Hey Good Lookin'," "Why Don't You Love Me," and more. Check out the complete track list below, and then start counting down the days until you can own the soundtrack.

This Williams classic is definitely not about food prep, no matter what the lyrics say. The cheeky number is sure to make any Hiddleston fan swoon — it has certainly done a number on Williams' fans over the years.

2. "Move It On Over" — Tom Hiddleston & The Saddle Spring Boys

You can go ahead and bask in Hiddleston's version in the clip above. It's clear Hiddleston is going to be beyond perfect as Williams.

This somber tune was a number one hit in 1948. Arnold was at the forefront of classic country music, and any movie about the country music industry should tip its hat to a great like Arnold. I Saw the Light is doing the industry proud with this one.

One of the most quintessentially southern songs of all time, "Field Hand Man" paints a picture of the era Williams grew up in. His father was firmly working class, a man who did hard labor with long stints away from his family, and Williams style was influenced by his upbringing, as well as blues musician Rufus Payne.

One of Williams most successful songs, "Jambalaya" stayed at number one on the country charts for 14 weeks in 1952.

Stafford's haunting song adds some female vocals to the mix. I can only imagine what kind of scene this tearjerker will accompany in the movie.

7. "My Bucket's Got a Hole In It" — Tom Hiddleston & The Saddle Spring Boys

This is one of the songs that Payne taught to Williams, hence the major Blues influence. The song was originally recorded by a different artist in 1927, but Williams' version has become the most recognizable.

Hiddleston will be covering this Jimmy Liggins' song for the album. Maybe he'll direct it toward Audrey Williams (Elizabeth Olsen)?

I sense a Christmas scene in your future.

This what a real break-up song sounds like. Take note, modern artists.

The heartbreak is strong with this one. If it sounds like this could accompany a depressing scene involving Williams and his wife, it's because it probably will.

This song wasn't just a success for Williams, it was also a major hit for his son Hank Williams, Jr. in the '80s.

The album will end with another Blues classic, proof of the influence the genre had on Williams, but also perhaps a commentary on Williams all-too short life.

Let your I Saw the Light soundtrack excitement commence, guys.

More like this
The Meaningful Easter Egg In The 'Black Panther: Wakanda Forever' Soundtrack
By Grace Wehniainen
The 'Love, Lizzo' Harry Styles Scene Is Just 1 Moment That Made Fans Feel Seen
By Brad Witter
Selena Gomez & Blackpink's Post-Show Meetup Left Fans Thirsty For More
By Stephanie Topacio Long
J. Lo Just Announced A New Album — And Ben Affleck Inspired At Least 1 Song
By Stephanie Topacio Long
Get Even More From Bustle — Sign Up For The Newsletter