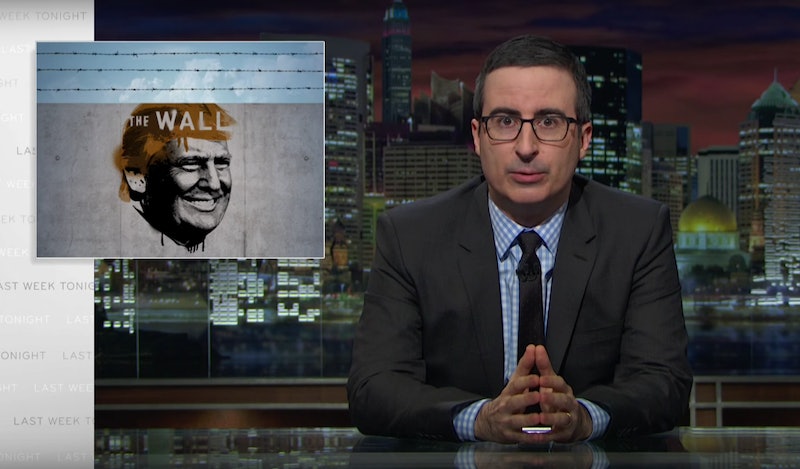 Late-night host John Oliver is no fan of Donald Trump (or Drumpf), and he continues to commit to segments bashing the Republican presidential hopeful. On Sunday's episode of Last Week Tonight, the comedian tackled Trump's controversial plan to build a wall along the entire U.S.-Mexico border, somehow making Mexico pay for the obstruction. Rather than just making fun of the scheme, Oliver explicates some detailed reasons that it's stupid. And the problems Oliver lays out with Trump's U.S.-Mexico wall make it even more clear why the idea wouldn't do any good.

"First, let's put aside the potential racism and xenophobia involved here — we can come back to that later." Oliver started. "And instead, let's focus on the practicality of whether and how it can actually be done." While explaining the more common arguments against Trump's wall plan, like how much it would actually cost to build and how effective it would be in keeping "dangerous" undocumented immigrants out of the country, he also examined some lesser-known issues that such a structure would cause.

Here are the problems with Trump's wall, as told by Oliver on Last Week Tonight. In case you needed any more proof that it's the last thing America needs.

"When Trump first started talking about this, he said it would cost a lot, but not a lot a lot," Oliver said. Trump's estimate of how much a U.S.-Mexican wall would cost has increased from $4 billion to $12 billion, leading Oliver to quip: "Donald Trump's margin of error is the entire GDP of Moldova." Trump claimed that his wall would be made out of concrete, steel, and rebar, so Oliver had an expert evaluate how much everything would cost at Trump's lowest estimated height of 35 feet for the 1,000-mile structure. Here's the breakdown:

Steel columns (including labor): Between $5 and $6 billion

Roads for trucks to deliver materials to hard-to-reach areas: $2 billion

Engineering and management: About 30 percent

That totals $25 billion — $13 billion more than Trump's highest estimate to date, and not including how much it would cost to buy all the privately-owned land along the border. But wait, there's more. Oliver cited the Congressional Budget Office's estimate that maintenance costs for such a wall would exceed the building costs within seven years. "So it's a big, dumb thing that only gets more expensive over time," Oliver said. "It's like getting a pet walrus. You think it's stupid now — wait until you know what a bucket of sea cucumbers costs."

Mexico Won't Pay For It

Trump claims that America has a $58 billion trade deficit with Mexico, which is how he'll make our southern neighbor pay for the wall designed to keep its citizens out of the country. "Unfortunately, that's literally not how anything works," Oliver said in the segment. "While, yes, we did buy $58 billion more in goods and services from Mexico than they did from us last year, that money doesn't belong to the Mexican government — it's earned by Mexican businesses." Basically, that money can't be used for a wall.

Oliver also pointed out that putting a wall across the border is much more difficult that it seems. In 2006, Congress approved a 700-mile stretch of wall in the Secure Fence Act, but there were multiple problems regarding where to place said fence. Large parts of the border in Texas are made up of the Rio Grande River, which cannot be obstructed due to a 1970 treaty, so areas of the wall were actually built pretty far inland. This created a weird no-man's land between Mexico and the wall.

Michael Chertoff, former secretary of homeland security, gave his department the authority to waive 36 laws to build the fence. Among the bypassed laws were the Endangered Species Act, the Safe Drinking Water Act, and the Native American Graves Protection and Repatriation Act. If more wall were to be built, the same thing would need to happen again.

A study by the Pew Research Center claimed that nearly half of all unauthorized immigrants enter the U.S. legally but overstayed their visas, which a wall won't prevent. "It's like wearing a condom to protect against head lice," Oliver joked. "You could do that, but that's not really how you keep the thing you're worried about from happening." Of course, there are some Mexicans coming to the U.S. illegally, but Oliver detailed how a wall won't stop them (for instance, ladders are pretty effective for climbing over walls, and drug cartels have found ways around the existing walls for years).

"Given everything we've seen, is it worth it?" he asked viewers. Oliver thinks that the money that would go toward building an ineffective wall would be much better spent buying every person in America a waffle iron, which he claims would do just as much to keep out illegal immigrants and drugs, would cost less, wouldn't harm America's relationship with Mexico, and would only be potentially racist toward Belgians. "Let's ask ourselves: What kind of country do we want to wake up to?" Oliver asked. "One that spends billions on an impossible, impractical symbol of fear, or one that smells like breakfast?"